Those ‘Avatar’ mountains are real, and they’re in China | Inquirer Lifestyle ❮ ❯ 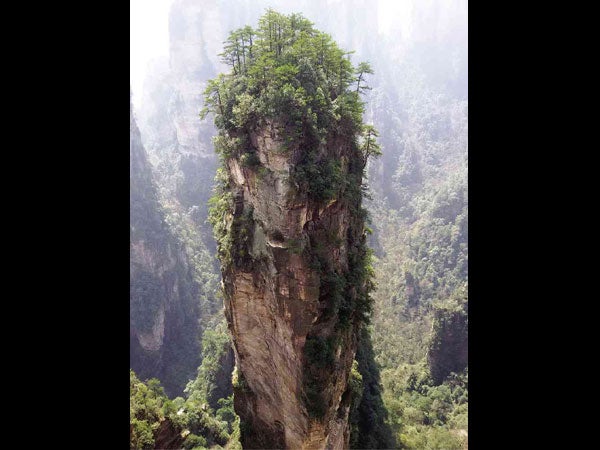 Those ‘Avatar’ mountains are real, and they’re in China

They’re not the floating, suspended-in-midair computer-generated imagery creations, of course, that director James Cameron eventually passed off in his blockbuster movie as the planet Pandora’s Hallelujah Mountains.

But they’re the original inspiration—an immense, scenic spread of mountain pillars in Zhangjiajie City in the south-central Chinese province of Hunan that served as the prototype for “Avatar’s” fictive diorama of hanging, mist-shrouded peaks where Pandora’s fearsome “ikran” dragon birds had their nesting grounds.

The 2010 Hollywood movie opted to make the mountains even more otherworldly-looking, but the real ones can very well stand on their own in terms of jaw-dropping impact.

Tianzi Mountain, from where the best vistas of the giant rock columns can be had, is merely part of the larger Zhangjiajie National Park, which in turn is within Hunan’s sprawling Wulingyuan Scenic Zone, declared a Unesco World Heritage Site in 1992 for its topography, found nowhere else in the world, of some 3,000 freestanding sandstone pillars that soar into the sky, their peaks capped with green foliage defiantly clinging to the sheer cliff walls. 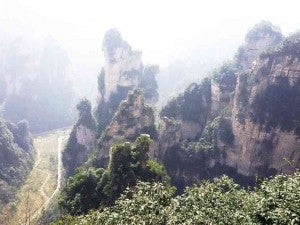 The natural scenery, wild and rugged and pretty much untouched, is as far as possible from the sights travelers now normally associate with modern China—the headlong bustle of Beijing or the glitter of Shanghai and Macau, for instance. Once visitors to Tianzi have gone up to the view decks via the Bailong Lift, a glass elevator that park officials claim is the tallest and fastest of its kind in the world (a plausible claim—the ride shoots to the top of the mountain range within a couple of minutes), they can be forgiven for thinking they’ve stepped indeed into another planet. The view is absolutely heart-stopping.

But, first: How far is Zhangjiajie from the Philippines? A look at the map suggests quite a long trip—a distance of 1,206 miles. But the travel time is actually surprisingly brief: The standard time for a Cathay Pacific flight from Manila to Hong Kong is less than two hours. Then from Hong Kong to Changsha, the capital of Hunan, aboard Cathay’s regional airline Dragonair is about one hour and 35 minutes. Another five hours will be spent driving from Changsha to the mountain city of Zhangjiajie.

All in all, about eight hours—or what it takes to drive up north to Ilocos, or south to Naga City. This one, however, takes travelers all the way to Chairman Mao’s birthplace (he was born in Shaoshan, Hunan) and to a scenic destination unlike anything they’ve ever seen.

Cathay Pacific, Dragonair and the China-based travel company Century Holidays’ ongoing Best of China packages give travelers the option to enjoy Zhangjiajie and its environs for seven days and six nights via what it calls the Best of Avatar tour, which costs $815 per person. 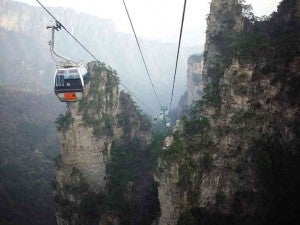 The itinerary includes, other than Tianzi Mountain, attractions such as the Yellow Dragon Cave, the Baofeng Lake River Cruise, a climb to Heaven Gate Cave and the Glass Trail Path on Tianmen Mountain, a ride on the Heaven Gate Cable Car (the longest such ride in the world, dubbed by CNN as among the “world’s five most thrilling cable car rides”) and a visit to Phoenix Town (one of the most well-preserved ancient Chinese villages, set against sublime river and mountain scenery).

The tour is so named because the Chinese themselves have had no qualms appropriating the Hollywood movie to draw more interest to the natural wonder in their midst. Everywhere in the park are reminders of its now ineradicable association with a pop artifact: huge billboard blending images of the finger-like mountain pillars with “Avatar” actor Sam Worthington’s Na’vi visage; “Avatar” memorabilia in every gift shop; even life-size replicas of a Na’vi strategically perched on a cliff, and a dragon bird in another part of the park.

More tellingly, the Tujia people of Hunan have themselves given assent to the official renaming of an iconic rock pillar called the Southern Sky Column into, that’s it, the Avatar Hallelujah Mountain, in acknowledgment of the movie that has significantly improved tourism to their province and city.

One’s sense of vastness and immensity will continually be challenged in this part of China. Tianzi Mountain’s giant stelae, for instance, find their underground echo in Yellow Dragon Cave, a 48-hectare system of cavernous passageways, pools and waterfalls, cathedral-like halls and domes, and millennia-old stalactites and stalagmites, the imposing rock altars eerily (alright, garishly) lit in various colors.

The entire cave system, it turns out, is wired; and some 2,000 man-made steps have been constructed—discreetly, the growing mounds of stalagmite left in their places, sometimes in the middle of a passageway—to help visitors navigate the bowels of the cave. The exhausting but exhilarating tour ends with a boat ride on an underground river. 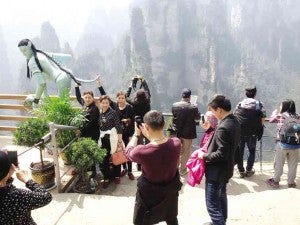 From deep underneath, one can go sky-high again at the nearby Tianmen Mountain, at nearly 5,000 feet (the highest peak in Zhangjiajie) an impressively well-developed scenic spot that is a testament to the Chinese’s technological and commercial savvy. The 30-minute cable car ride going up allows visitors to glide over the sheer sides of mountains, over pristine forests and streams, up into a park whose main pull is twofold.

There’s the Glass Trail, a path built into the mountainside with a see-through floor, the view underneath a sheer drop into milky nothingness on a misty day (“If you are bold enough, why not challenge this ‘transparent stimulation?’”, goes the inscription by the entrance); and a 999-step climb into “Heaven’s Gate,” a venerated natural giant hole at the top of the mountain that veritably looks like a gateway to another dimension.

That dramatic natural monument, already suffused with local mythology and romance, becomes even more compelling a sight at night, when a musical production created by famed director Zhang Yimou, based on an old folk tale about a farmer and a fairy fox, plays at a specially made open-air theater at the foot of the mountain. The sheer scale of the show—some 300 performers, magnificent costumes, a sprawling set that transforms into a waterfall, LED technology and special effects that seamlessly meld with the human actors onstage—is topped only by the final colossal flourish: the facade of the mountain blasted with light, creating the kind of engorged backdrop only the director of “Hero,” “House of Flying Daggers,” “Curse of the Golden Flower,” and the Beijing Olympics opening ceremonies—aided by China’s tremendous wealth, of course—could conjure.

Cathay Pacific, Dragonair and Century Holidays also offer tour packages to Macau with the Best of Ocean Kingdom Tour, while the Best of Guilin Tour takes visitors to the lovely riverside city in the northeast that has become one of China’s most well-known tourist magnets.

Compared to these two, Zhangjiajie and its variety of mountain lures remain the rarer destination; but thanks to a Hollywood blockbuster that is changing fast. See them now, before those long-silent mountain pillars begin resounding with even more human din.