I am so happy that Pope John Paul II is now a saint. A saint is described as one who has lived a holy and blessed life and is presumed to go straight to heaven upon his death. The Catholic church has other requirements for sainthood aside from living a sacred life, and that is, that one should have performed a miracle or two.

In my humble opinion, I would consider the following message of John Paul II as an additional miracle to his already proclaimed ones—published by Reuters on July 31, 1999: 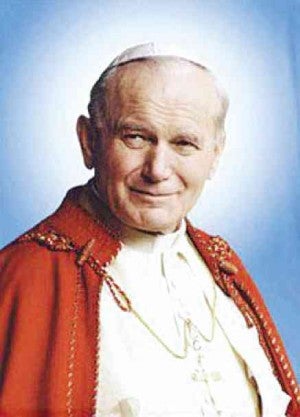 “Forget the flames and the devils with pitchforks. A week after telling the Roman Catholic faithful (that) heaven was not in the clouds, Pope John Paul II said on Wednesday hell was not a physical place either.

“Lest sinners think they can get off lightly, though, the Pontiff said hell was for real and, rather than being inflicted by God, it was something sinners brought on themselves.

“‘Hell is not a punishment imposed eternally by God, but the condition resulting from attitudes and actions which people adopt in this life,’ he said.

“‘More than a physical place, hell is the state of those who freely and definitely separate themselves from God, the source of all life and joy,’ the Pontiff said in a weekly audience. ‘So, eternal damnation is not God’s work but is actually our own doing.’

“The Pontiff’s end-of-millennium guidelines on hell came a week after he told pilgrims (that) heaven was not ‘a physical place in the clouds but a living and personal relationship of union with the Holy Trinity,’ and that a foretaste could be had here on earth.

“‘If we are able to enjoy properly the good things that the Lord showers upon us every day of our earthly lives, then we have begun to experience the joy which will be completely ours in the next life,’ he told pilgrims last week.”

Many people have denied the story’s veracity, claiming that Reuters had misunderstood the communiqué. Well, as fate would have it, my friend Fr. Carlos Ronquillo of the Redemptorist Formation, Baclaran Church, was there to hear it firsthand from John Paul II himself.

I salute Pope Francis for canonizing St. John Paul II and for bringing to the world a new liberal papacy. I predict one day that he would proclaim my study on the Christ as the truth that will set us free from all fears, limitations and unworthiness.

US President Barack Obama and P-Noy toasted each other at the Palace, as a state dinner of Filipino fare prepared by the chef of Reto Klauser’s Shangri-La Makati was served.

In town to welcome Obama that day is my good friend Loida Nicolas-Lewis, who has been a supporter of every Democrat president since she married Reginald F. Lewis, a Harvard classmate, author of “Why Should White Guys Have All the Fun?” and a self-made multibillionaire.

Her love story can be told only by Loida herself. There is one anecdote, however, that I would like to share, to give you an idea of the nature of their relationship. In one of the many dinners we have had when she comes to the Philippines to attend to matters relating to Lewis University in Sorsogon, I asked her how she managed to keep her marriage happy for 24 years.

Her answer not only deserves to be quoted, but to be followed by many women whose husbands are habitual philanderers. “On my wedding day,” said Loida, “I lovingly told Reginald: ‘I do not ask you to promise fidelity, but all I ask of you is to come home every evening and I will never ask you what you did during the day.”

Loida wasn’t here only to welcome Obama, but also to promote “Noli Me Tangere, the Opera,” with music by Felipe de Leon and libretto by sculptor Guillermo Tolentino, both National Artists, which will have a September run for 21 days at Resorts World Manila (RWM).

She is spearheading this project with JS Productions Inc., with Jerry Sibal, president, creating the fabulous costumes and sets through digital effects to depict the different scenes.

At the recent press launch, Loida related how she felt when she first saw “Noli Me Tangere” in Chicago: “I was so much in awe of the presentation, I promised myself I was going to bring ‘Noli Me Tangere’ to New York, and I did—to rave reviews from the New York Times. With that kind of encouragement, there was no stopping me. I said to myself, I will bring you to the world so everyone can marvel about the exemplary talents of the Filipinos. Imagine two national artists coming together to produce music and lyrics for our premier national hero’s immortal ‘Noli Me Tangere!’”

At the cocktail introduction prepared by RWM president Kingson Sian at the third floor of the Vestibule, Newport Performing Arts Theater, we were treated to excerpts from the opera that not only gave us goose bumps but also brought us to tears, especially the heartrending song of Basilio sung by a 15-year-old soprano, Kirby Asunto, who also played the role in the Chicago and New York performances.

In my early thespian years, I had the honor of playing the role of the shameless Padre Damaso, which I garnered simply because I looked the part. Modesty aside, I was cited best actor for that performance in my UP Prep high school days. With deepest gratitude to Claro M. Recto’s Rizal Law in my early teens, I was already aware of how the Spanish tyrants abused the natives, and the social cancer that was spreading through a system of governance that consumed all that was upright, moral and decent in a society. Add to that the hypocritical, rapacious ways of the church that did not bring God to the people but instead tried to take away their godliness.

To all those who are in a position to assist, let us help make the 21 days of “Noli Me Tangere” a success like no other. No opera of this caliber ever enjoyed a successful 21-day run. Let us be the first in the world. We can do it. The Filipino can. 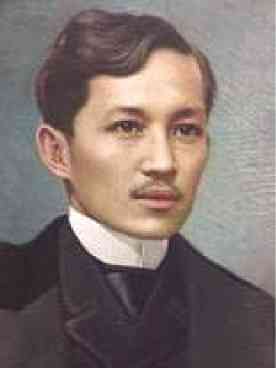 “Noli Me Tangere” was first published in Berlin, Germany, in 1887. One hundred years later, the opera version was performed with a full orchestra at the CCP for the first time.

It was the book that ignited the Philippine revolution. By the way, a bullet from that revolt still lies buried in one of the main posts of Don Felipe de la Fuente’s home in San Rafael, Bulacan. He was one of Jose Rizal’s best friends, and he just happens to be my great-grandfather. Our national hero would often visit from Laguna on weekends, and it was in the church beside Lolo Felipe’s house where Rizal picked up the tragic story of Crispin and Basilio.

During one of our De la Fuente reunions, we dropped by the church and the chaplain showed us the spot where Crispin’s blood was spilled, courtesy of the guardia civil.

It seems that my connection with the national hero would not end there, because later, my mother’s first cousin, Siony Lopez-Bantug, would become his grandniece. And, to my surprise, suddenly, Gemma Cruz-Araneta and I had an aunt in common.

Let me segue to another revelation having to do with Rizal. Gemma recently introduced her book “Rizal’s True Love.” Most everyone, when asked who Rizal’s true love was, would answer Josephine Bracken or Crisostomo Ibarra’s Maria Clara. But they are all mistaken.

His one and only true love was Mother Filipinas, for whom he gave up his life. All you have to do is read his “Last Farewell” to understand how deep and profound his love was for the country. In Spanish, “Mi Ultimo Adios” is not just a love poem. It is a song of symphonic proportions that touches every fiber of one’s sensibility and vulnerability.

After reading “Rizal’s True Love,” I have become certain of one thing. Gemma’s true love is the great Jose Rizal, who set us free from the social cancer that was the tyrannical Spanish governance and the Damaso-esque abuses of the church. Touch me not!

“I love Life! I now move beyond all limitations and allow myself to express freely and creatively.”