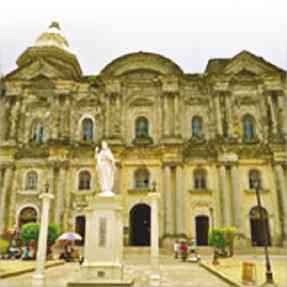 The Sigma Delta Phi Alumnae Association’s (SDPAA) Cavite and Batangas Heritage Tour is the best bet for immersion in culture and history while shopping for local finds and sumptuous treats.

The tour on May 17 starts with a visit to the General Emilio Aguinaldo Shrine in Kawit, Cavite.

This is the house of the first Philippine President and where the Philippine flag was first unfurled during the proclamation of the Republic of the Philippines signifying freedom from Spanish rule.

From there, the tour proceeds to Taal, an enchanting colonial period village nestled on a hill overlooking Balayan Bay. This town boasts of numerous well-preserved Antillan and art-deco period stone houses, old churches and historical landmarks associated with key events during the Philippine Revolution.

It is also known as Southern Tagalog’s embroidery capital and home of the popular Batangas balisong or fan knife, and the panocha, a sweet local delicacy.

The Taal walking tour will cover the following popular and famous landmarks: the Taal Basilica (San Martin de Tours) first built in 1575 and considered as the oldest and largest church in East Asia; the Villavicencio Ancestral House and Escuela Pia, a centuries-old Spanish colonial edifice that is now considered an architectural legacy in the plaza complex.

There will be additional stops at the Galleria Taal that hosts an exhibit of rare photographs of events from 1870 to 1980s and a collection of rare vintage cameras; and the Marcela Agoncillo Shrine, the ancestral home of Marcela Agoncillo, a distinguished Taaleña matron who helped sew the first Philippine flag.

The Taal Public Market is a must for piña fabric and barong embroidery, fan knives and delicacies like derecado longganisa and panocha.

Registration is until May 9. Fee is P1,700 inclusive of transportation costs, lunch and merienda, and entrance fees.

The tour buses will leave Shell Station Magallanes at 7:30 a.m .and will be back in Manila by 6 p.m.