Tenor Arthur Espiritu on Sir Simon Rattle: ‘One of the most amazing conductors of our time’ | Lifestyle.INQ ❮ ❯ 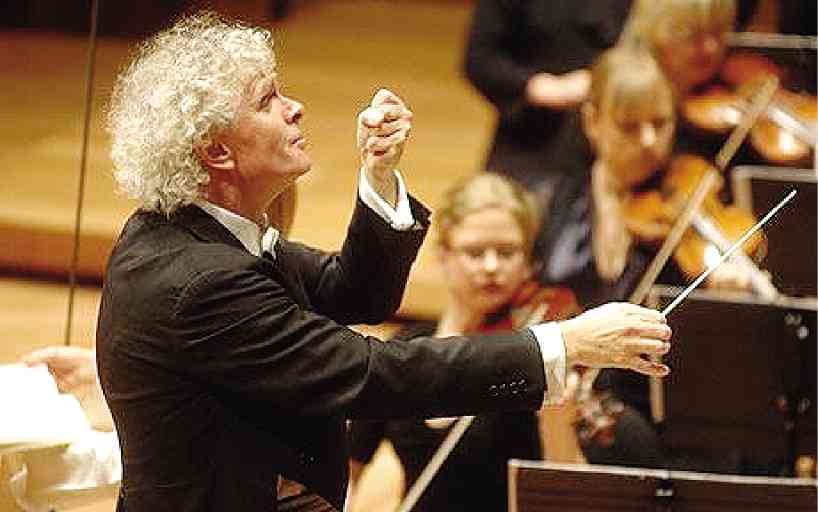 Tenor Arthur Espiritu on Sir Simon Rattle: ‘One of the most amazing conductors of our time’

By singing the role of the Lamp Lighter in Puccini’s “Manon Lescaut” at the Baden-Baden Festspielhaus accompanied by the Berlin Philharmonic Orchestra (BPO), Filipino tenor Arthur Espiritu virtually made his debut under the eminent conductor Sir Simon Rattle.

The 50 years of the BPO is associated with three illustrious conductors, namely, Herbert von Karajan, Claudio Abbado and Rattle.

Filipino soprano Evelyn Mandac and tenor Otoniel Gonzaga were lucky to have worked with Karajan in past Salzburg festival events, while Cecile Licad was one of the favorite soloists of legendary conductor and former BPO 1 music director Abbado.

This year, Filipino tenor Espiritu was lucky to sing in four performances of the Puccini opera (three in Baden-Baden and one in the Digital Concert Hall in Berlin) with the BPO under the baton of Rattle.

Espiritu is the first Filipino to have worked with the famous British conductor who debuted with BPO in 1987 in a performance of G. Mahler’s “Symphony No. 6.”

In 1999, Rattle was appointed successor to Abbado as the orchestra’s principal conductor.

Espiritu recounted his Berlin Philharmonic experience with Rattle in the podium: “Sir Simon is definitely one of the most amazing conductors of our time. I have not heard an orchestra so well-tempered and filled with emotions. There are no letdowns. With some orchestras, you would hear certain flaws and certain oversights like a lack of color phrasing…

“I can honestly tell you that I have never been as musically excited. Sir Simon bends tempis, his crescendos are real crescendos, and he has a knack for making this already amazing orchestra sound like no other.”

“By far, I hold Sir Simon Rattle with the highest respect,” added Espiritu. “He is truly an approachable man, gracious and just wonderful as a person,”

The concerts in the Digital Concert Hall in Berlin are broadcast worldwide and allow classical music fans from all over the world to enjoy the Berliner Philharmoniker in the comfort of their own living rooms.

The BPO brochure says that since the first broadcast in January 2009, the Berliner Philharmoniker has sold over 20,000 tickets, including 3,500 subscriptions for the current season. Two-thirds of viewers are from overseas, mostly from Japan and the United States.

Espiritu also has high praise for the acoustics of the Digital Concert Hall in Berlin. “It is just simply amazing. You can get heard everywhere. Indeed, it is a state-of-the-art concert hall,” he noted.

In the last two months, Espiritu was in Germany for assorted engagements, starting with the role of the love-sick Ernesto in a well-received production of Donizetti’s “Don Pasquale at the Oper Leipzig.”

In between rehearsals and performances of “Manon Lescaut” in Baden-Baden, Espiritu sang the role of Count Almaviva in Wiesbaden, which he said did well.

“I had to work within two weeks to get it back in my memory, and then rehearse the staging for only four days. And oh, there was a skit to memorize in between scenes, so I had to memorize that,” he recalled.

“What’s amazing about it is that Sir Simon Rattle agreed to let me go to do this production. He understands that this is what I do for a living and he was kind enough to let me out of rehearsals for a week because there is a conflict. So, again, it’s just an amazing experience,” said Espiritu.

Still, the tenor said his German engagement was like a mini-vacation for him in Baden-Baden.

“There was a lot to enjoy, like the beautiful hiking trails, amazing landscapes and, overall, a relaxed atmosphere. Working with director Richard Eyre was great. He is not very strict,” he said.

After Germany, Espiritu will be back in Switzerland to debut as Fernando from Donizetti’s “La Favorita” at the St. Gallen Festspiele. Rehearsals will start next week.

But on the day before the St. Gallen rehearsals, he will sing his last performance of Oper Liepzig’s “Don Pasquale.”

On July 11, 2014, Espiritu will team up anew with the Manila Symphony Orchestra conducted by Maestro Darrell Ang at the Tektite Tower Auditorium Ortigas in a mostly Mozart program.