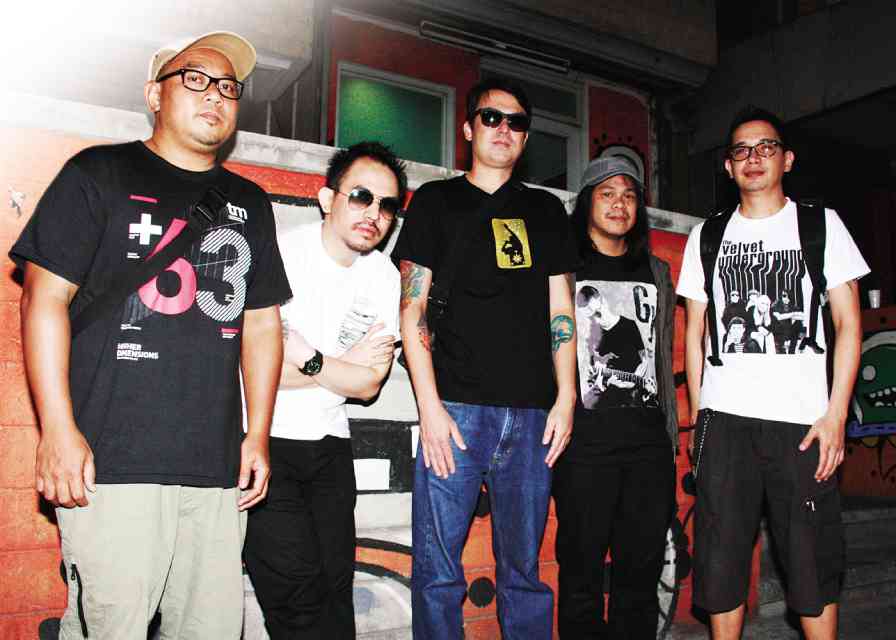 TEETH: Mike Dizon, Dok Sergio, Glenn Jacinto, Jerome Velasco and Peding Narvaja. The band will have a one-night only reunion concert on May 15 at Metro tent, Pasig City.

I come from an era when digital downloads weren’t the easy way to access music and vinyl wasn’t the cool new-old thing to get into. Back then, you could still buy cassette tapes and CDs were the more expensive option. Rock radio stations were still very much alive and there was so much more than Top 40 hits playing extensively on the airwaves.

It was the ’90s, a time when rock music held a prominent place in a still lucrative industry, a decade when phenomenal rock bands like Teeth were born.

Teeth was formed in 1993 with Glenn Jacinto (vocals), Jerome Velasco (guitar), Peding Narvaja (bass) and Mike Dizon (drums) as the original lineup. They were playing at a party when one of the owners of Club Dredd approached them and asked them to audition, which eventually led to a series of gigs at the esteemed venue.  Narvaja migrated to the United States in 1997 and was replaced by Dok Sergio.

The band’s self-titled debut album was released in 1995 and its carrier single, “Laklak,” flew off the charts instantly. By the time the second single, “Prinsesa,” gained radio airplay, they were already certified rockstars.

“Laklak” is easily one of the most recognizable Pinoy rock songs ever written. Every conyo rocker, punk wannabe and PUV driver probably knows and head-bangs to this song when no one’s looking, and most likely, your conservative aunt is familiar with it, too, but disapproves of its lyrics.

It was one of two Teeth songs honored at the NU Rock Awards. As for “Prinsesa,” three remakes of this single have been recorded and released, the most recent one sung by an insanely famous, young matinee idol.

Jacinto recalls a humorous incident that happened while he was touring in Canada with Dong Abay and The Youth. Right after his set, a teenage girl approaches him and says, “Sir, thanks for playing my favorite Daniel Padilla song!” The girl’s uncle corrects her immediately by saying, “No, no, he’s the original singer!”

Just when they had crossed over to mainstream success, Jacinto was diagnosed with cancer in 1996. But it was not yet the end for Teeth, as Jacinto recovered the year after, prompting them to resume recording and eventually launch “Time Machine.”

The band’s sophomore effort was not as sensational as the first but it showcased an evolution in the band’s songwriting and spawned quite a few hits.  It also proved that the band was too good to be a one-hit, or rather one-album, wonder.

“I Was a Teenage Tree,” the band’s third release, exhibited a more mature, fully developed aesthetic that could cater to more intent listeners and a less rowdy audience. It made way for “Shooting Star,” another winner of Song of the Year at the NU Rock Awards.

After three substantial albums, it was pack-up time for the band. Jacinto recalls that his last gig was sometime in 2001. It was the same evening he told his band mates that he would be migrating to the United States, and most likely for good.

Jacinto left and Teeth became a stubborn memory that would resurface from your subconscious whenever you’d get to hear their hits. The only follow-up release thereafter was “Dogs Can Fly,” a best-of album released in 2003.

It has been 13 years since Teeth’s frontman called it quits to pursue a life elsewhere. Every so often, someone would inquire about or request a Teeth show with him in it, claims Jacinto, but it never took shape.

Jacinto is now based in Los Angeles and is only here on vacation. Dizon has become one of the most admired drummers in the music scene and has since co-founded Sandwich and Pedicab. Sergio and Velasco are now with Pupil, and have ventured into music production as well. Three of the band’s members are now proud parents raising kids of their own.

The Pinoy music landscape has evolved as well. These days, you have different bands playing different kinds of music under different sub-genres.  In the ’90s, there were only balladeers, divas, a couple of rap artists and mostly alternative rock bands, and yet each of these bands had a distinct sound, allowing them to stand out in an ocean of riffs, bass lines and pulsating drum beats.

Some would even go as far as saying that the ’90s was the Philippines’ ‘golden age’ of alternative rock.

Sergio attributes the success of ’90s bands to the plethora of influences that they had then that was not accessible to the masses at the time.

“I think that it’s mainly the influences we that had. At that time, the grunge scene was like, ang dami naming paghuhugutan, ang daming magagaling na grunge bands. Hindi pa nga uso yung Internet; we could play their songs and no one would know about it.”

Dizon, on the other hand, has an entirely different view.

His advice for kids who aspire to be successful in the field:

“Mag-aral sila. School is one thing. Aral kayo [ng] music. There’s so much to learn. Even now, we are still learning. The kids now are fortunate; they have Youtube and all these things. Minsan, nate-take for granted ng mga kids ’to. Education is out there on the Internet; before, we didn’t have this. It’s gonna pay off. You gotta up the ante now.”

Teeth struck it hot despite its relatively short-lived yet prolific stay in the music industry. It makes one wonder how these guys feel about their first reunion concert after so many years.

Sergio continues: “We’ve been preparing a lot. Gusto namin ito talaga ’yung most beautiful Teeth experience for fans and for everyone.”

All five members will be playing at the band’s reunion concert at Metrotent on May 15.  Narvaja will be playing bass for Teeth for the first time in years and Sergio will alternatively be caressing two more strings than usual.

Teeth’s reunion concert will be an evening of nostalgia and a celebration for those who have waited so long to see the band perform live again. It is a chance for fans to consume a live repertoire of Teeth’s songs and an opportunity for the younger generation to get to know who started it all, before the pa-cute remakes and drunken videoke renditions.

Is there a chance they’ll be back together again?

Jacinto pauses for a moment and answers, “In the long term, I cannot answer that.”