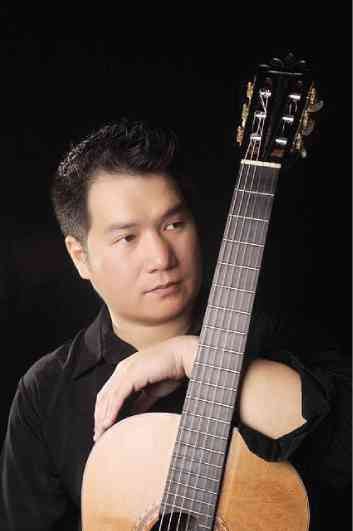 Prize-winning classical guitarist Ramoncito Carpio says it would be an honor sharing the stage with the eminent Paraguay-born Berta Rojas who will make her Philippine debut at the Meralco Theater on Thursday, May 15 at 8 p.m.

“Berta Rojas is one of the guitarists that I admire most because of her way of connecting to the audience every time she performs,” said Carpio. “She has this wonderful aura, on and off stage that draws you to her. She is one the most inspiring person that I have known.”

Rojas has been described by Washington Post as “guitarist extraordinaire” and is noted for her “heart-touching musical artistry.”

“Joining competitions pushed me to be the best that I can be,” he said. “It made me more aware of discipline as a way of improving my craft. It triggered in me a more effective way to practice, and to pay more attention to detail.”

Competitions do not define anyone as an artist, Carpio added. “I know a guitarist who never won competitions but is very talented. Not winning a competition does not mean that you are not a good guitarist. Competition results are just the judges’ opinion and do not reflect how the world sees you as an artist. However, I have to admit that winning competitions is also a good way to establish one’s career.”

His most memorable competition stint was with the Taiwan guitar festival and competition in 2012, the biggest festival he has attended.

“A lot of well-known guitarists from all over the world were invited in the festival,” he said. “During the weeklong festival, we were able to take lessons with different guest artists. I was a bit discouraged after each lesson because most of the teachers did not like the way I play in the way I interpreted some pieces. Since they were also judging the competition, I already accepted that I don’t have a chance of winning. I just played the way I wanted, and got the second prize.”

The classical guitarist likes to think the state of guitar appreciation in the country has improved compared to its following five to six years ago.

“In 2010, the first Philippine International Guitar Festival took place which is the biggest guitar activity we had in years. With the efforts of guitar aficionados, the guitar scene in the Philippines has greatly improved becoming more of a community. The social media has helped a lot as well. We may think that the situation is better in other countries but the problems we see here—like lack of audience and paying market—is basically the same in other countries, not just in guitar but classical music in general.”

Carpio will  proceed to   Kemji Resort in Virac, Catanduanes after his May 15 Manila engagement.