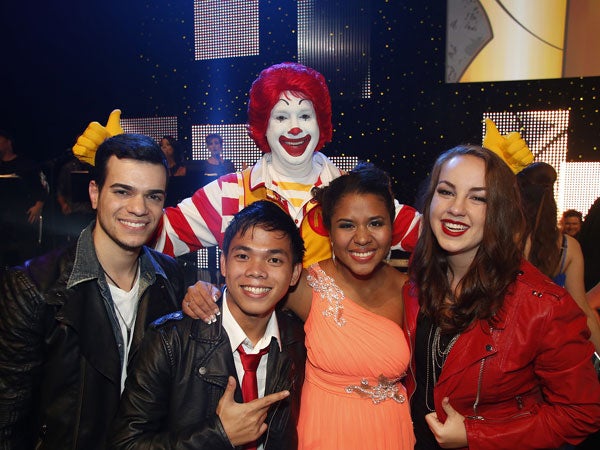 From holding cooking wares and mops at McDonald’s CDO Divisoria branch, 20-year-old Rocky Rosabal never imagined his humble job as a crew member would lead him to sing before thousands of people in an international singing competition.

With “Faithfully” by the band Journey as his winning piece, Rosabal placed first runner-up in Voice of McDonald’s Season 5 Finals, a global singing competition exclusively for over 1.8 million McDonald’s crew and managers, during McDonald’s Worldwide Convention in Orlando, Florida, last May 1.

“Before, I performed at acoustic bars in CDO but most of the time, there were no customers. No one usually watched me,” Rosabal told reporters Friday in his homecoming celebration at the Greenbelt McDonald’s inMakati City.

“(But) with 15,000 people watching me that night, ibang iba yung feeling,” he recalled.

Outshining about 500 McDonald’s employees in the Philippines, the CDO crooner made it to the finals participated in by competitors from more than 63 countries. The grand finals were judged by award-winning songwriter David Foster,  prominent entertainment attorney Ken Hertz, and recording artist Skylar Grey.

For the fifth season, the grand winner was Lucila Ospitia, a Colombian, while Ashlae Nelms from Illinois, USA, and Patrick Rei from Switzerland were second and third runners-up, respectively.

Rosabal, who has been a McDonald’s crew member for two years, was also hailed as “Fan Favorite” in a public online voting contest with a cash prize of US $5,000.

“The judges told me that whenever I sing, my stage presence was very telling. Para daw silang pumapasok sa kanta,” the Mindanao-based singer said.

How has the Voice of McDonald’s changed his former self? Rosabal said joining the worldwide competition helped him overcome his shyness and stage fright.

“Before, I could not even open my eyes when I performed in front of so many people,” he quipped.

But after besting thousands of competitors, Rosabal gained confidence.

“Don’t stop believing… it will all pay off (in the future),” he said.

Asked where his cash prize would go, Rosabal said he will save the money to finish his remaining year in pursuing a Bachelor of Arts and Sciences degree at Capitol University in CDO.

In a statement, McDonald’s Philippines CEO and President Kenneth Yang said, “A large part of McDonald’s success is attributed to our people. Our crew members and managers work tirelessly to provide the best service to millions of Filipinos, thus we are dedicated in investing heavily on their training and offering them opportunities to help them grow as individuals.”

“The entire McDonald’s Philippines system congratulates Rocky for his success in the competition and once again showing the world how hardworking, driven and talented our local crew is,” he added.