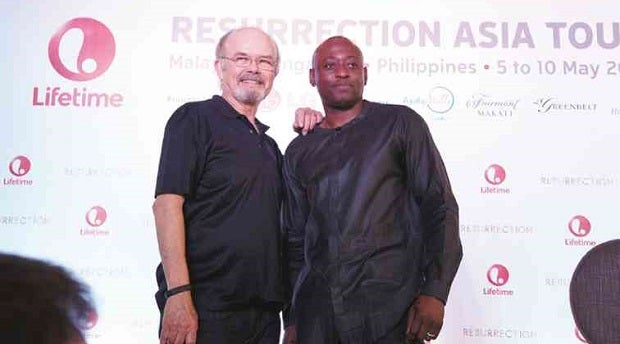 You can’t not know Kurtwood Smith. You may not remember him by name, but his stern features are ever-present in numerous TV shows and movies.

Folks who watched the original “RoboCop” know him as the deplorable villain Clarence Boddicker. Fans of a younger Robert Sean Leonard in “Dead Poets Society” will recognize Smith as the unyielding father who would not let his son be an actor. He has also played different variations of federal agents, doctors and businessmen.

But for those who grew up watching “That ’70s Show,” you don’t know him as Kurtwood Smith, but rather as Red Forman, the hard-nosed, strict dad who wants nothing more than to plant his foot in the collective asses of his son Eric Forman and his friends.

Smith is back on TV again, this time playing a gentle, grieving dad in “Resurrection,” ABC’s hot new series airing here on Lifetime Channel Asia. The show has gotten positive reviews and gained a huge following of viewers that it reportedly edged out “The Walking Dead” ratings-wise.

The series is based on a book by Jason Mott titled “The Returned.” In the show, Smith plays grieving dad Henry Langston, whose 8-year-old son Jacob died in a drowning accident. Jacob is found in China 32 years later, alive and the same age at the time of his death.

He is returned to the Langstons by immigration agent Marty Bellamy, played by Omar Epps. The mystery unfolds, as more and more dead residents of Arcadia, Missouri, are found resurrected and returned to the joy—and confusion—of their grieving families.

The show was given an initial season run of eight episodes. When Smith and costar Epps visited Manila last week for the last leg of their promotional Asian tour for Lifetime Channel Asia, they still had no idea if the show was going to be renewed.

But fans who have gotten hooked on the show will be glad to know that “Resurrection” has already been picked up for a second season.

The actor is the complete opposite of his well-loved alter ego Red Forman. Now in his 70s, Smith is soft-spoken and friendly, with a ready smile and impeccable Old-World manners.

During his interview with

Inquirer Super, we inadvertently moved his crumpled tissue on the table, but which he removed from our hands while apologizing profusely. Then, as a waiter arrived with a soda, Smith said, “Thank you, Gerald,” smiling at the server.

Earlier at the press conference, Smith and Epps were said to be eager to try Jollibee.

We asked Smith if it was his first time in Asia. “I’ve been to Japan before, and I’ve also been to Thailand a couple of times, different parts… Bangkok, Chiang Mai, places like that for work, and also Bali—I was there for three weeks. But it’s my first time for any of these trips—Kuala Lumpur, Singapore, here (Manila), this is all first time,” said Smith.

His Twitter username, @tahitismith, seems to allude to water images. So we asked him if he was a beach person. He said, “When I was a little boy, there was a television show called ‘China Smith,’ and I always thought of it as a great name. It was about this guy who was a private detective in China; he had a white suit and a white hat, it was great. Having just been to Tahiti, I just kind of used the two things. I’m not that much of a beach guy. When I’d go to the beach, it’d be to resorts and stuff because I used to scuba dive. I like scuba diving but not really big on laying around in the sand.”

Yes, Smith is on Twitter, and we couldn’t help but ask if joining the microblogging site was his own volition or if it was something forced upon him.

He laughed before replying, “I did not understand the Twitter thing; I had done it some time ago, because my personal assistant at the time said, ‘Oh you have to do this.’ And my wife, she used to do it a lot, so I said, ‘OK.’ I signed up and totally forgot about it. And then when we were doing the show, people said, ‘You have to start twittering, tweeting, whatever.’ And so I said, ‘Oh-kaaaay.’”

He explained his reluctance to tweet: “I would never know what to do because it’s like, to be honest with you, Twitter is like holding up signs all the time, just like when you come up with some smart idea, and you hold up a sign about it, you know? Anyway, it’s become important whether I find it silly or not, so it’s something I have to do.”

He also confirmed that though he gets to be called Red on a regular basis, he’s cool with it. “I get recognized a lot from that. It’s never bad. It’s not like Brad Pitt or something that you can’t go out in public. People always say compliments, it’s always very nice,” he said, again with a smile.

Has anyone ever asked him to call them “dumbasses”? He said, “People ask me to call them a dumbass all the time! All the time. Strangers come up to me at airports and go, ‘Hey, call me a dumbass!’ It’s so silly to me that they would wanna be called a dumbass. ”

As someone who’s played a lot of dads on TV and in films, his new role as Henry Langston is probably the most similar to him as a real-life father. His inspiration for Red Forman’s curt manner was his stepdad. “In some ways I would be closer to Henry. But Henry has gone through some pretty rough times that I haven’t, fortunately (knocks on wood). It’s kind of hard to say I’d be like him. But personality-wise, I think we’re much more similar than some of the other characters I’ve played. As I mentioned, Red Forman was kind of based on my stepdad, but that’s in the sense with how he deals with kids, calling them dumbasses, telling them what he’s going to do with his foot, all that kind of stuff… That’s the way he would behave at times, but he wasn’t really like that, but then Red isn’t, either.”

He paused for a bit before explaining what made Red so memorable. “The thing that makes him work is the fact that even though he’s always giving these kids a bad time, you know he loves these kids, all of them. He was always the neighborhood dad as well as the dad of Eric.”

A show like “Resurrection” can leave one contemplating about the loss of a loved one, and Smith has thought about who he’d want to see coming back to life if given the chance. “My biological father was killed in World War II; he was a pilot. He had never seen me and I had never seen him. So I think it would be quite something to meet and spend some time with him. The difference, of course, is he would be 24, and I would be 70,” he said with a laugh. “It would be an unusual situation,” he added.

He was Red Forman for eight long years, and now he’s back on TV playing a character on a show that could go on for quite some time. He enjoys playing someone long-term but emphasizes the importance of a great working environment. “I think that question pertains entirely to individual cases because it depends who you’re working with, what you’re doing, the kind of scripts that you’re getting,” he said. “I know people who have been on TV for a long time, and they’re always complaining about the terrible scripts they have to deal with. But for me it was always really good material, and the people I was working with were always fun. We had a great time for eight years on that show, I hope we have the same here; they’re wonderful as well in a different way.”

In a previous interview he did for TV Guide, Smith mentioned how some of the jokes on “That ’70s Show” were changed by the writers at the last minute, so watching its reruns can actually be a new experience for him.

Has he ever made himself laugh?

“Sometimes. Not in the sense that ‘I’m so funny,’ but more like, ‘Oh, what a funny line.’ It’s fresh to me, therefore, yes, I do find it funny. Normally, I’m not big at laughing at myself,” Smith said, laughing again.

“Resurrection” airs every Monday at 10 p.m. on the Lifetime Channel Asia.