Cities on the edge, cities of the future | Inquirer Lifestyle ❮ ❯ 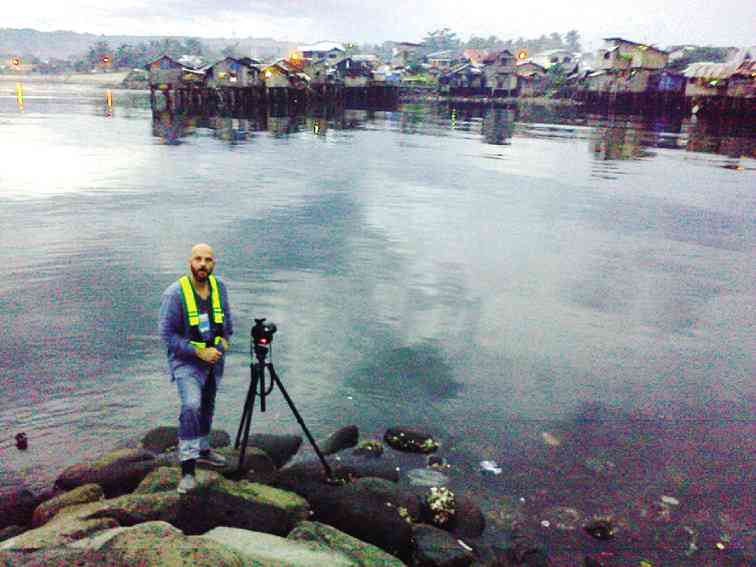 SCOTTI in Macajalar Bay to take photographs of a Badjao village.

Cities on the edge, cities of the future

Sometime ago, the Italian photojournalist Alessandro Scotti went to Tajikistan and, in the whirl of things, befriended the reigning Miss Tajikistan.

He was struck by her beauty as well as her facility for the English language, and promptly hired her as his interpreter. And then he took her with him to a dangerous assignment.

They wove through the winding mountain roads and entered a residential compound. They were ushered through a maze of doors and guards. There, in an inner sanctum, was a drug lord and his trusted lieutenants. He had agreed to a photographic encounter with Scotti, provided that certain conditions were met—principally, the nondisclosure of identity.

The beauty queen busied herself doing translations during the interview. But at some point, she stopped and pointed to a corner of the room. There, in a luxurious cushion, a man appeared to be in a fit of convulsion. His body twitched spasmodically, with a suspicious froth spilling out of his mouth.

It turned out he was a relative of the drug lord, and he was having a drug overdose.

The drug lord and his cabal were of two minds: to call for medical help or take him to the hospital and thereby get the attention of the authorities, or to merely keep the peace. In the ensuing argument, guns appeared from nowhere—some family members insisted on calling for an ambulance.

In this gripping life-or-death scenario, Scotti pulled Miss Tajikistan from the scene—she was coddling the victim and whispering reassuring things to him—and the two quietly navigated their way through doorways back to their car and out of the compound. Somebody had called the authorities and sirens were wailing towards the drug lord’s lair.

Scotti’s photographs of this incident were acclaimed as a high moment of journalism, and he went on to win yet another award.

A few days ago, a new suite of Scotti’s photographs were unveiled at the week-long international gathering of 42,000 people from 142 countries during the seventh session of UN Habitat’s biennial World Urban Forum in Colombia.

Scotti’s new work was called “Edge Cities.” The photographs were organized in a series of stop-motion videos running on large-screen monitors at Plaza Mayor at the heart of the city of Medellin.

Nothing can be edgier than the city which, not too long ago, was feared as the stronghold of powerful drug cartels; but it was named last year by no less than the Wall Street Journal as “The Most Innovative City in the World.”

Shedding off its former image as a violent center of the cocaine trade, Medellin has successfully positioned itself as a pleasant city you can explore on foot or on a bicycle, or even through the state-of-the-art Metro system of commuter trains, city buses and cable cars.

This dramatic, because unbelievably quick, makeover of what is one of the most notorious Latin American cities in recent memory into a mesmerizing and very happening tourist destination captures Scotti’s quiet but urgent point in “Edge Cities”: Let us think about the cities we live in and the changes we need to make to ensure a better urban future for everyone.

“Edge Cities” is a suite of 15-minute videos of Scotti’s photographs of the nine cities around the world chosen by UN Habitat as “the emerging cities of tomorrow”—one of which is Cagayan de Oro in the Philippines.

These are today’s secondary cities whose geographic location, political importance, and remarkable growth (from the economy to their population) propel them to strategic roles in the foreseeable future.

“The aim of the project is that of coupling technical instruments used by the leading UN agency in urban issues with an authorial, systematic visual analysis of the urban experience,” the exhibit notes say.

Launched in 2009, “Edge Cities” “is to date the most global (geographically varied) photographic investigation campaign on urban landscape of intermediate cities ever endeavored by a public institution.”

As Christopher Rollo, head of UN Habitat-Philippines, pointed out, “These are not your usual touristic photographs. Scotti has the courage and the daring to explore the interstices of development to bring to our attention the human drama in the context of change and challenges. He offers us wake-uppers.”

In Nampula, the third largest city in Mozambique, Scotti captures a woman, her hair wrapped in a colorful cloth, flinging a plastic basin of filthy laundry water out of her high-rise balcony into a sea of rooftops in the neighborhood.

The technical virtuousity of this shot—the playful opacity of the water filtering the outdoors view of the vast sky and the claustrophobic density of the neighborhood—helps articulate the photographer’s critique of the tension of private and public spaces in the urban context.

In Johor Bahru on the straits of Johor that separate Malaysia and Singapore, Scotti tramps through marshland to get a portrait of the wilderness punctuated, at the far end, by an upscale high-rise development that would certainly affect what, for now, is the no-man’s-land backwoods. Interestingly, the structure hinted at in the distance is proud of its cultural consonance with the dominant religion.

In Tetouan in Northern Morocco, Scotti revels in the multicultural fervor of the downtown traffic of people.

In Uberlandia, in the State of Minas Gerais of Brazil, Scotti hops on a helicopter to take a bird’s-eye view of the spatial arrangements of public and private spaces, revealing intricate layers of spatial relationships.

In Malmo, part of Oresund Region south of Sweden, Scotti basks in the liveability of the human settlements despite the alienating onslaught of snow.

In Santa Marta in the northern department of Magdalena in Colombia, Scotti feasts on an array of colorful housing units at the beachfront—a triumph of urban planning in what was once the feared backlots of violence.

In Hunchun, in the far eastern Jilin province of Northeast China, Scotti impresses on us the sprawl of the newly built city bereft of people, as if the government has not yet decreed who among its citizens would be uprooted from their rural lives to live in this impeccably engineered social experiment. And then, in the wink of an eye, we are given a shot of people in formal wear standing in black-and-white seriousness around a wedding car festooned with flowers arranged to spell L-O-V-E.

In Onitsha, on the eastern bank of Niger River in the Anambra State of Nigeria, there are many exposures of armed men in various contexts. And then Scotti finds a woman sitting by her lonesome in dilapidated surroundings identified by a sorry-looking signage as “International Salon.” Outside, the market is a riot of heartbreaking scenes. But Scotti’s touch of irony reminds us that this is a public intellectual project: amid all the squalor and poverty—for instance, malnourished-looking children queuing up for drinking water in the stunning heat of midday—Scotti shows us a towering collection of empty Coke bottles.

Having prepped us thus, Scotti then gives us a glimpse of how things truly are: school-age children attend a class in an open-air shed shaded by a flimsy layer of corrugated tin while the female teacher heroically wields her chalk as she scribbles the lesson on the wall of an unfinished hollow-block fence. Here is the education index: public walls as blackboards.

In “Edge Cities,” Scotti drains his photographs of color, and then restores them according to his editorial purpose, serving us a series of photographs in split-second exposures and then stopping them in singular moments of epiphany, sometimes in full color, sometimes merely hinting at color, but always on a bed of numbing atmospheric music by Guiseppe Ielasi, and then teasing us through layers of brusque, brutal encounters to other revelations about the complexity of our common humanity.

His assertion of his authorship of the photographs make us realize that he does not merely document. He is an artist telling us his story. And his story is important because he is telling us, or rather showing us, an unsparing, in-your-face history of tomorrow.