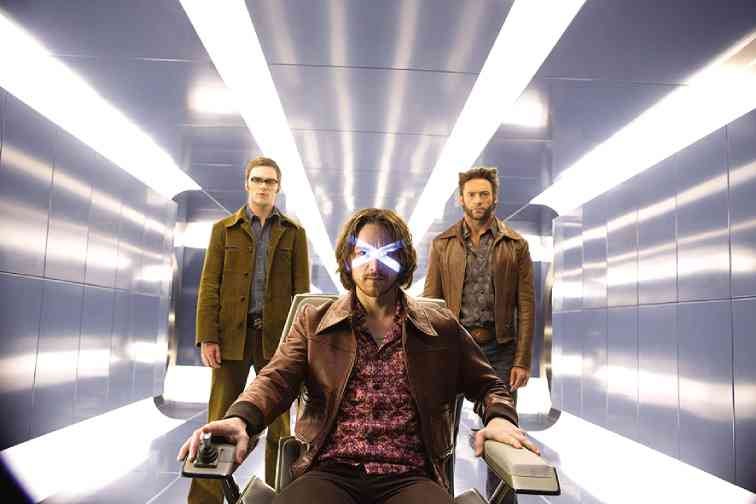 In the latest X-Men franchise “X-Men: Days of Future Past,” director Bryan Singer brings to the silver screen one of the most iconic stories in the comic book canon, setting the movie in the early 1970s when the world was undergoing tremendous change and turmoil.

In the movie, Magneto (Michael Fassbender) has been incarcerated for 10 years. During that time, Raven (Jennifer Lawrence) has been investigating the disappearances and deaths of certain mutants.

(In the previous film, “X-Men: First Class,” Raven, who herself is a mutant, was once a promising student of Professor Xavier before joining forces with Magneto. She takes on the identity of the shape-shifter Mystique and turns her back on humans.)

She seeks revenge against the person responsible for the genocide, so she time-travels back to Vietnam during the war and experiences its horror.

Soon, Raven comes to a hard decision that will determine where her true loyalty lies: between the all-too-good Professor Xavier (James McAvoy), who wants an absolutely peaceful coexistence, and Magneto, who doesn’t trust that humanity will ever allow that to happen.

“The X-Men story particularly is about war and its aftermath,” Singer said. “The movie opens up with the tragic results of a world war in the future, and so to go back to the end of the Vietnam War is really powerful both visually and thematically. It sets the tone of a world that is now sick of war, having seen the unnecessary loss due to a very long conflict.”

This takes off from “X-Men: First Class,” which reunites Lawrence, McAvoy, Fassbender and Nicholas Hoult, and, from the original trilogy, Hugh Jackman (who plays Wolverine/Logan), Patrick Stewart, Ian McKellen, and Halle Berry. All films were directed by Singer.

While producing 2011’s “X-Men: First Class,” Simon Kinberg began conceptualizing the storyline for the next “X-Men” feature with filmmaker Matthew Vaughn. They kept gravitating toward a story that juxtaposed two generations of X-Men.

They were inspired by the original “Days of Future Past” comic book written by Chris Claremont, who appears in a cameo role in the film.

“I think it makes perfect sense to have the past be set in the early ’70s when the world was undergoing tremendous change and turmoil,” said Claremont. “It certainly made chronological sense after ‘First Class,’ which was set in the ’60s.”

For Claremont, the most important element of storytelling is to take readers by surprise. He feels “Days of Future Past” is a fantastic story to bring to the screen.

“It’s one of the most iconic stories in the canon,” said Claremont. “That, combined with Bryan Singer’s vision and a cast of breathtaking variety and depth, is very cool.”

Time travel is a key component of both the comic book and the new film, though Singer said “X-Men: Days of Future Past” has  an unconventional take on it.

“The difference is that we’re not sending someone back in time, physically,” Singer said. “Instead, we’re sending a character’s consciousness into his younger self.”

While Singer was exploring the logic and physics of time travel, Kinberg was studying time-travel literature and movies while working on the script.

“What is unique about ‘Days of Future Past’ are the intercuts and interactions between past and future,” Kinberg said. “One of the challenges of the project was not only keeping the logic intact but having the emotion feel continuous. The continuity of a young character and an older version of the same character created a new set of criteria. Keeping the emotional logical, not just the rational logical, was as challenging as the physics and psychology of time travel.”

Wolverine’s mutant abilities make him the only member of the X-Men capable of time-travel.

“Going back that far in time would rip apart the mind of anyone else,” Singer said. “There’s only one person who has the regenerative capabilities to survive the experience, and that’s Wolverine. Since he doesn’t age, when Wolverine’s mind travels back to his younger self, Hugh [Jackman] was able to play both versions of the character. So that was a great opportunity for me and for Hugh.”

One character firmly situated on the dark side is Dr. Bolivar Trask, played by Peter Dinklage. Trask is the inventor of the enormous robotic weapons, the Sentinels. His aim is to unite the human race by eliminating its evolutionary rivals, the mutants.

In fleshing out the character, Singer said they created Trask for “emotionally logical reasons,” a character who wants to hunt down and exterminate mutants. For Singer, Trask had to be more than a stock villain that was seeking to destroy people for being different.

“X-Men: Days of Future Past” 3D will open in cinemas on May 21. It is from 20th Century Fox and distributed by Warner Bros.