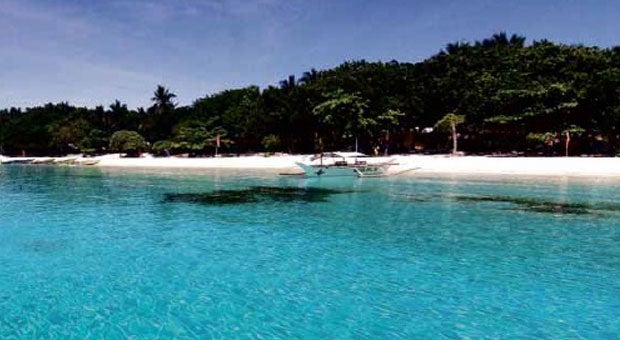 PINK SAND, BLUE WATERS The quiet environment in Matnog, Sorsogon, invites travelers to frolic on the island’s pinkish-white beach or take a dip in the placid, blue waters so clear that trick the eyes with the illusion of boats levitating. MARK ALVIC ESPLANA/INQUIRER SOUTHERN LUZON

MATNOG, Sorsogon—Lovers of adventure and cheap thrills will find a paradise waiting for them, after initially overcoming the challenges posed by Matnog’s tricky water currents.

Surrounded by placid inland seas, the islands of Tikling and Subic off the coast of Sorsogon’s mainland town of Matnog invite travelers to frolic on pinkish-white sand, or take a dip in waters colored in different shades of blue, indicating a vibrant and healthy marine ecosystem.

This quiet tourist spot is also a diver’s haven, with vast clusters of coral reefs lurking under an aquamarine sea that is part of a fish and coral sanctuary and a more than 500-hectare marine culture area maintained by the Bureau of Fisheries and Aquatic Resources (BFAR).

Nonie Enolva, Fisheries Regional Emergency Stranding Responding Team leader in the Bicol region, said the light peach color of the beaches comes from the red organ pipe corals (Tubipora musica) that are carried by the waves to the shores of the islands.

In 2009, the BFAR was at the forefront of a campaign to replace blast fishing with fish farming among local fishermen in the waters between Tikling, Subic and the pebble islet of Monbon. Gil Ramos, BFAR Sorsogon field office chief, said the BFAR allotted P150,000 for the rehabilitation of the area and for the campaign that saved Matnog’s marine ecosystem from further damage caused by dynamite blasts.

The BFAR thus set the pace for introducing the concept of ecotourism to Matnog, and called it the aquadventure experience, to provide alternative income for the locals in the jump-off points to and from Subic: the small port in Barangay (village) Camachile beside the main Matnog port and Barangay Calintaan on Subic Island.

The two beaches are separated by a hill, which tourists love to climb to capture panoramic photos of the island. Fresh fish like snappers and groupers grilled on top of dead corals washed ashore are sold by enterprising residents to visitors who may want to lunch there.

A 10-minute boat ride from Subic Laki will take you to the Calintaan sea caves, a cluster of small caverns carved by the sea on rock faces surrounded by clusters of corals, home to hosts of fish. The area, like Subic Laki and Subic Liit, is a popular site for snorkeling, scuba diving and swimming

Ariel Garcera, 37, a member of Boatmen and Operators Organization of Matnog (BOOM), regularly takes tourists to the caves and the way to a small pebble beach tucked at the end of the largest cave there. The beach, illuminated by a bit of sunshine pouring through an opening on the cave’s ceiling, can only be reached by swimming through a tunnel.

The beach is a favorite of foreigners who leave tiny towers of pebbles as proof of their visit, according to Garcera.

Some five minutes away by boat from the caves is the islet of Monbon surrounded by yet more coral reef clusters hiding in the deep clear waters.

It is home to an ancient lighthouse of the same name. Locals no longer remember the year the lighthouse was built. Today, it serves as a landmark for boatmen bringing visitors who wish to snorkel in the deep.

Named after a type of native bird, the island of Tikling is 10 minutes away from Subic but is in a more pristine state as it draws fewer visitors to its shores. The sand is finer and pinker than that of Subic as it was relatively undisturbed until Matnog opened the area to tourists recently.

Sea grass flourishing under clear water is abundant here, as well as schools of anchovies and other small fish that swim alongside with tourists.

Just a 10-minute boat ride from Tikling and Subic is Juag Lagoon, a 5,762-square-meter privately operated open-sea aquarium of more than 20 fish species, starfishes, giant clams and lobsters that has been under the care of Alex and Evangeline Geneblazo since 2000.

Alex, a fisherman, allows tourists to swim and snorkel for free, as long as they do not pollute the environment with waste and chemicals (like skincare products). The couple said they started raising milkfish and seaweeds for food until they began collecting other live commercial and aquarium fish species that they buy from other fishermen.

The lagoon is home to four kinds of lobsters that used to be caught in the waters of Matnog by fishermen using illegal methods. The tiger lobster, which sells for P1,800 per kilo, thrives in his lagoon along with the spiky, red and flat variety. They can grow to as heavy as 5 to 6 kilograms. Milkfish, snapper (maya-maya) and lapu-lapu also grow to as long as nearly 2 meters in the lagoon.

The couple only accepts donations from visitors for the maintenance of the lagoon.

Day tours for Matnog Aquadventure are available at P1,600. For an overnight tour, the fee is P2,000 via BOOM and/or Matnog Councilor Christopher Hadap, who supervises the operation of BOOM on behalf of the municipal government. The members of BOOM use 74 tourist boats provided by the municipality.

The package includes boat rental, small cottage rental and tour guide fee, but there are separate fees for food and lodging.

Tents can be rented at Vito Beach Resort for P200 a night. Big groups may also rent Vito’s P700 cottage made of rattan and bamboo, with electric fans and lights. Smaller groups can rent the open cottages for P300.

For those who want air-conditioned comfort, cottages that can accommodate up to 12 people are available at P1,700 (overnight) at Holy Trinity Beach Resort. Overnight guests are advised to bring their own blankets.

With Naga City in Camarines Sur province as the starting point, a 95-km van ride takes you to Daraga, Albay province, for P180. From there, you can board another van for P170 for the 121-km ride to Matnog town. One can also come from Legazpi City, Albay, by taking a 15-minute road trip to Daraga via taxi (P100), tricycle (P60) or jeepney (P8) and on to Matnog.

In Matnog, BOOM operators and Councilor Hadap can be found at the Barangay Camachile jump-off point, the gateway to Subic and its other attractions.