Benguet: Where climbing peaks is an act of worship | Inquirer Lifestyle ❮ ❯ 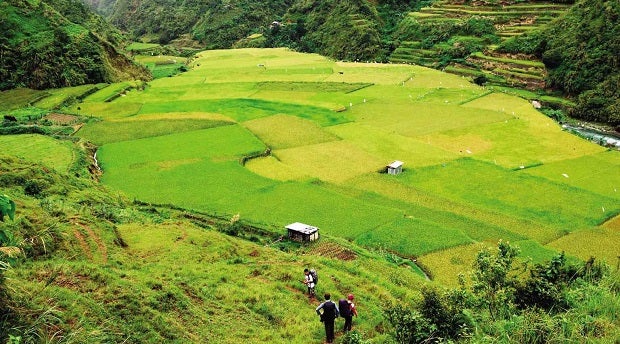 CHANGING COLORS The rice terraces of Kibungan town in Benguet province usually start to turn yellow as harvest time nears. Farther up the mountains, however, the hue is a constant green. Approaching the peaks and the gigantic rocks in the clouds makes one feel insignificant against nature. Climbers say it’s a humbling experience to realize the power of nature. SONNY CRUZ/INQUIRER CAMERA CLUB

Benguet: Where climbing peaks is an act of worship

BENGUET, Philippines—Not many may have heard of Mt. Tagpew and Mt. Oten, but that works just fine for outdoor enthusiast Rainiel Lee.

Except for an occasional post or two in social networking sites, these two peaks have not quite made it to local guidebooks—yet.

But its relative obscurity, in fact, is what makes this destination appealing to Lee.

“I prefer not-so-commercial destinations,” said the freelance videographer and photographer. “Call it a personal bias, because this is part of my personality.”

Together with a close friend from Kibungan town and a local guide, Lee would climb Mt. Tagpew and other nearby summits from time to time.

Mt. Tagpew lies on the border of Tacadang village in Kibungan and another village in neighboring Bakun town. The towns’ alpine terrain has awed trekkers looking for thrills, challenge, adventure and a spiritual experience.

Mountaineers are advised to make an early start from the Poblacion, Kibungan’s town center, since it takes at least seven to nine hours (depending on one’s agility and endurance) going up to Mt. Tagpew. For this reason, out-of-town climbers may have to stay overnight at the Poblacion, a four-hour bus drive along a 67-kilometer mountain road from Baguio City.

Despite the long travel and the difficult climb, mountaineers vouch for the ultimate reward: an exclusively personal experience after reaching Mt. Tagpew, some 2,100 meters above sea level. The experience has elicited meditative insights and reflections from Lee.

“The first time I climbed Mt. Tagpew, I felt intimidated as I approached the peak and saw gigantic rocks cloaked by clouds,” Lee said. “I felt so insignificant and I realized that nature will always win against humans.”

The first time Lee and his colleagues climbed Mt. Tagpew in the summer of 2009, they had to leave the Poblacion at 6 a.m. They passed foothills and foot trails along ravines and their climb, mostly uphill, was interrupted only when they had to refill their jugs with water from springs and brooks, or when they paused to cook lunch along the way.

Along their journey, they were treated to splendid views of the picturesque rice terraces of Tanap and Palina villages’ Mayon-like Mt. Kilkili, actually a dead volcano, surrounded by more than century-old rice terraces. These are among Kibungan’s pretty-as-a-picture scenic spots.

One bonus that comes with climbing Mt. Oten, which is 1,875 masl in Kibungan’s Tacadang village, is picking wild blue berries, which ripen during the summer. Last year, Gal-ad Maximo, Lee’s colleague and coworker, said they were surprised when they came across burned parts of the summit, including patches where the wild berries, called “ayusip” by locals, grew abundantly.

Although they missed the ayusip, Maximo, also a freelance videographer and photographer, and her colleagues said the climb was something they would like to experience again and again, given the opportunity.

Oten and Tagpew are part of the mountain ranges of Benguet overlooking the provinces of La Union, west of Kibungan, and Ilocos Sur in the northwest.

For Maximo and Lee, hurdling the difficult climb in both summits is like winning the first prize.

“I find it more satisfying climbing Kibungan’s mountains because of the difficulty going there,” said Maximo. “Once you have climbed the mountains of Kibungan, you can climb any mountain anywhere.”

One route to both Tagpew and Oten is an almost 90-degree-angle pathway carved on a rock. An accidental slip would mean falling off a ravine more than 100 meters below. But this has been the main road of Tacadang villagers for the longest time simply because there is no other way.

Fortunately, no villager has been reported to have fallen off the steep pathway. Still, this is what many look for—the thrill of having survived a death-defying challenge.

“Mt. Pulag, with its cool, fresh breeze, is like a walk in the park,” said Maximo. “Kibungan’s summits are more of an obstacle course.” The country’s second highest peak, Mt. Pulag, straddles part of Kabayan and Buguias towns in Benguet and Tinok town in Ifugao.

During the early phase of the climb, finding the nearest “tapaw” or shade to protect one from the scorching summer heat and the steep paths are “part of the main challenges” in scaling Kibungan’s mountains, Maximo said. “Once you slip and fall off the cliff, there’s a slim chance your body can be recovered.”

For Lee, climbing Kibungan’s mountains brings out the child in him, and a sense of wonderment.

“The mountains are a challenge for someone like me who has a fear of heights,” he said. “The rocky terrain sort of gives me this sense of danger and reminds me of my imaginary adventures as a child.”

In the end, Maximo and Lee admit that climbing mountains is like embarking on a spiritual journey.

“Going there is like an act of worship for us,” Maximo said. “God is somewhere there in the mountains where man is at the mercy of nature.”

According to Lee, he “walks these mountains, away from most people, to nourish my being and deepen my faith in the greater forces that work around us.”

Both added that reaching a mountain top can help make one have a better perspective of life.

“Being up there means you can look down and see a wider spectrum of living,” said Maximo. “The meaning of life should be there somewhere, or maybe not. There is a sense of time shifting to the past in the mountains where man can still interact with nature in a symbiotic relationship.”

Climbing mountains also has a humbling effect because the experience enables one to realize that “man is arrogant, [but] nature is [more] powerful,” she said.