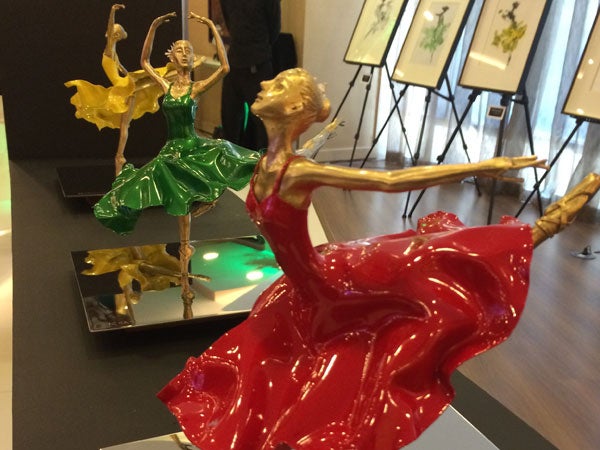 MANILA, Philippines—Avida Land Corp. and the 1989 Batch of Maryknoll (now Miriam) College High School joined hands to mount “Modern Inspiration,” an art exhibit featuring the works of Ferdinand Cacnio, held from 1 pm to 7 pm on May 24, Saturday, at the Avida Showroom in Glorietta, Ayala Center, Makati.

Cacnio is a visual artist known for his intricate works inspired by dance. “Modern Inspiration” is a limited edition exhibit of sculptures by Cacnio, an older brother to another prominent brass sculptor named Michael.

Cacnio has had a 20-year career in graphic design as creative director of Atelier Cacnio, which he also owns.

In 2005, Cacnio shifted gears by coming up with a solo sculpture exhibit called “The Dancer” and immediately bagged an award in the AAP (Art Association of the Philippines) Art Competition that same year. He has since amassed an impressive resume that includes 10 solo art exhibits, group shows and art auctions.

As an artist striving to inspire people through his works, Cacnio’s “Modern Inspiration” exhibit is aptly titled as it is an inspired paean to dance and the rhythm, discipline, and robust soul that goes with this branch of the performing arts.

For Maryknoll Batch 1989, Cacnio created a series of limited edition ballerina sculptures entitled “Turning Point, Change with Grace.” These ballerinas are in distinct poses and don tutus in colors of orange, blue, white, green, yellow and red. The colors represent the values espoused by the Maryknoll sisters.

Carla Corona-Castillo, head of the Maryknoll High School Batch 1989 Homecoming committee shares, “When we were brainstorming for a big project which could define us, our batchmates Laura Penaranda-Guevara and Seset Guiao-Lopez suggested a work of art which is lasting and valuable. When Laura and Seset showed us a photo of Ferdie Cacnio’s work, that was it.

“We knew we had found what we wanted. The ballerina in the picture was beautiful, graceful, very feminine yet showed inner strength and determination. When we saw the actual sculptures, we were in awe because they were even more exquisite than in the photo.”

Carla emphasizes, “The ballerina sculpture is a fitting symbol to the turning point in the history of our school that changed name from Maryknoll to Miriam after the Maryknoll sisters turned over the running of the school to lay people.”

Proceeds from the sales of the sculptures will fund the advocacy projects of Miriam College.