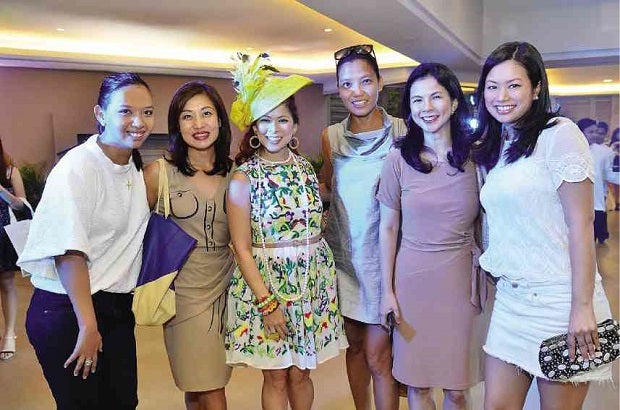 Next month, my hubby Dennis and I will have been married for 20 years. As the saying goes, time flies when you’re having fun. But the corollary to that is that time does fly by too fast.

In the blink of an eye, it seems, two decades have flown by, filled with wonderful adventures, countless outfits and happy memories. We have been blessed to have celebrated many delightful highlights and milestones, and are truly grateful.

My long-time designer-genius friend, Rajo Laurel, has been creating numerous outfits to match my outrageous style. We are now busy working on a wedding anniversary gown, inspired by “Game of Thrones” but with an exciting surprise. His creative juices are being squeezed to make sure it will be a standout gown!

His shop at 6013 Villena corner Mañalac St., Poblacion, Makati City, has been like an extension of my clothes closet for many years. His new retail address is called Rajo! at  2/F, Power Plant Mall, Rockwell Makati.

This summer, House of Laurel explores Palawan. Inspired by the island and its undersea flora and fauna, Rajo combines a dichotomy of pastel hues and oceanic prints, the urban and the tropical, a study on lightness brought to life through texture.

One of Rajo’s stunning creations was recently complimented by international style icon Paris Hilton when she came back to inaugurate the Paris Beach Club of the Azure Urban Resort Residences in Parañaque City. Manila brimmed with excitement when the premier property developer Century Properties Group held an outdoor party at the Paris Beach Club after the ribbon-cutting ceremonies.

Century Properties’ John Victor “Jigger” Antonio pulled out all the stops to make Azure a residential community unlike any the country has ever seen. A beach party was the best way to showcase and celebrate this beach-inspired development.

A DJ booth mounted before the lagoon pool of Azure had everyone on their feet. But nothing could prove to electrify a party crowd more than the sight of Paris Hilton—international style icon, businesswoman and, most recently, DJ—who was ready to jump in and join the fun!

Seen among the crowd of happy revelers were the Antonio family—Ambassador Joey and Hilda, Jigger and May, Marco and Jackie, and Carlo and Cat, along with their children. Vehicle sponsor BMW Philippines also shuttled Paris in style to the Azure property for the party.

Thanks to Hilda, I had my BFF photo with Paris herself as well as my friends Digzy Umali and Den Casipit of Salon Privat. We were ecstatic to party with the modern-day pop princess at Azure.

Beach life in the city

Azure residents were likewise there to enjoy the event, whose décor by talented Pido Villanueva included mermaids, jellyfish and sea creatures. The party highlight was the magnificent fireworks display that lit up the Azure night sky.

The Paris Beach Club and Azure were created to give residents a consummate beach-life experience. This is a fitting celebration for all its residents, who may previously have only dreamed of beachside living. Now there’s a new saying: Life’s a beach—especially at Azure.

Just a few weeks after, Century Properties pulled off another fabulous event when it gathered Manila’s crème de la crème for its Century City Mall’s grand launch, marking the official opening of the five-story boutique mall on Kalayaan Avenue, Makati.

Indeed, the mall is a showcase of Century Properties’ passion and creativity as a developer. The mall is part of the 3.4-hectare Century City rising on the site of the former International School. The vibrant, chic and modern mall aims to deliver a greatly differentiated customer experience.

Century City Mall GM Graham Coates said it is already called the “mall of modern Makati” and will be an exciting complement to the other retail centers in the city. The well-designed layout and exciting mix of merchants make the new retail space a delightful mall to shop in.

Right in the midst of the mall is a TWG Tea Salon; guests were served refreshingly cool signature teas. Free-flowing cocktails from Grey Goose, Bacardi and Bombay Sapphire followed suit.

I especially enjoyed TWG, as it offers an incomparable selection of over 40 varieties of teabags, the largest collection from a single tea company in the world. Rooted in its commitment to quality and attention to detail, TWG Teas are just the perfect cup each and every time.

Century Properties is truly creating world-class, high-profile residential properties in the country. All its developments are memorable including the Essensa East Forbes towers that started it all. Today, the group is focused on pushing the design envelope further, with Trump Tower, the Milano Residences, the newly turned over Gramercy Residences and Knightsbridge Residences, and of course, Azure Urban Resort Residences.

Thanks to Century Properties, all real estate developers have had to improve on their own products, which, of course, ultimately benefits homeowners.