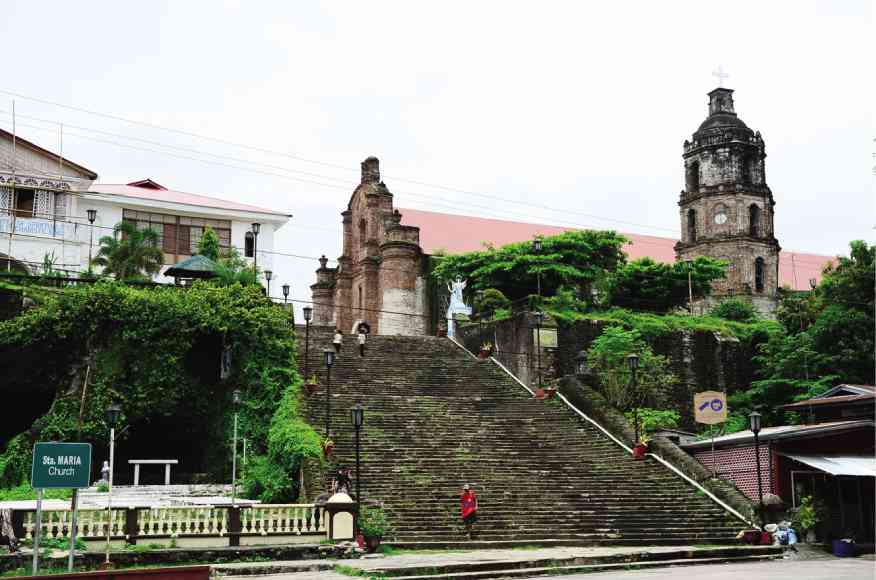 OUR Lady of the Assumption Church

From Ilocos to Iloilo, heritage churches for one’s spiritual journey

For the faithful Catholic, a pilgrimage can be considered a deeper encounter with God. With it comes the opportunity to express deep intentions such as forgiveness for sins, physical and spiritual healing, or simply thanksgiving.

And while a pilgrimage to Israel or Rome would be ideal, Filipinos also need to realize that the Philippines has been blessed with heritage churches  filled with stories of struggles that have defined this Christian nation, just waiting to be appreciated.

Consider Ilocos with its iconic churches that include the San Agustin Parish Church and  Our Lady of the Assumption Church.

One of the four Spanish-era Baroque churches in the Philippines enshrined on the Unesco World Heritage List, Our Lady of the Assumption in Santa Maria, Ilocos Sur, sits on a hill, requiring one to walk up an 85-step stairway to reach it.

Local folklore tells the story of how the Virgin Mary would disappear from Barangay Bulala and reappear on a guava tree standing on the ground where the church would eventually be built.

Similarly imposing is San Agustin Parish Church in Paoay, Ilocos Norte,  another Baroque church  distinguished by its earthquake-proof features, such as  low and wide orientation and  thick side and back buttresses.

To its side is the bell tower that was also the observation post for Katipunan soldiers of the 1898 Philippine Revolution. It would prove useful once more for Filipino guerrillas battling the Japanese in World War II.

An Augustinian friar, Fr. Antonio Estavillo, led the construction of the church in 1694; it was finished in 1710. Unesco added the church to its list of World Heritage Sites in 1993.

Over in Magsingal is another church built by the Augustinians, the San Guillermo Ermitaño Church. Reinforced with relatively thinner side buttresses, this church was declared a National Cultural Treasure by the National Museum of the Philippines in 2001.

Inside, a three-layer Baroque style altar features saints each housed in a niche.

But these churches are just some of the more famous ones. So long as you’re in Ilocos, try going to  San Andres Apostol Church in Bacarra and  Santa Monica Church in Sarrat.

Just an hour’s drive away is Tayun town in Abra province where  Santa Catalina de Alejandria Church is. It has palayok art motifs inside and is also a National Cultural Treasure.

Meanwhile, in Iloilo, there is a church that should see an increase in visits by devotees.  Jaro Cathedral, which was declared the National Shrine of Our Lady of the Candles by the Catholic Bishops’ Conference of the Philippines in 2012, now owns the distinction of having the only statue in the Philippines canonically crowned personally by a saint.

Pope John Paul II—declared a saint this year along with Pope John XXIII— crowned the icon during his visit to Iloilo on Feb. 21, 1981.

On orders of Bishop Mariano Cuartero, the first cathedral was built in 1874 before the January 1948 earthquake reduced it to rubble.

Another interesting feature of the church is that the columns inside are adorned with all-male saints, complementing the all-female saints inside  St. Anne Church in Molo.

Another church with unique features is   San Joaquin Church, whose Baroque façade immortalizes Spain’s victory against the Moors in the Battle of Tetouan in 1861.

So, how did this come about? Apparently, the Spanish priest who had a hand in the construction of the church, the Augustinian friar Fr. Thomas Santaren, had a father who was part of that battle. He had stone carvers create a bas relief in celebration of that victory.

San Joaquin Church is by far the only one of its kind and is listed as a National Cultural Treasure.

Then there is  Sta. Monica Parish Church in Pan-ay, Capiz, which is about two hours away from Iloilo.

Originally built in 1698, this Baroque-style church has gone through disasters and restoration. Its biggest attraction is its 10.4-ton bell, the largest of its kind in Asia.

Made by the town dentist, Don Juan Reina, the bell was cast from 70 sacks of coins donated by  locals. The bell’s inscription reads: “Soy la voz de Dios que Ilevarey ensalzare desde el principio hasta el fin de este pueblo de Panay para que los fieles de Jesus vengan e esta casa de Dion a recibit las gracias celestials. (I am God’s voice which shall echo praise from one end of the town of Pan-ay to the other, so that Christ’s faithful followers may enter this house of God to receive heavenly graces.)”

And it can clearly do just that, as locals say the bell’s ring can be heard within a radius of as far as eight kilometers. The bell, which is 70 meters long and 25 meters wide, can be reached by going up the five-story belfry’s narrow flight of stairs.

These are but some of the churches that the Filipino faithful can go to not just during Holy Week but all year round. As part of the National Heritage Month every May, Filipino Heritage Festival, Inc. (www.heritagefestival.ph) organizes a heritage pilgrimage tour that also includes lectures on local culture and the arts.

The National Heritage Month came to be after the signing of Proclamation No. 439 on August 11, 2003 “in recognition of the need to create among the people a consciousness, respect, and pride for the legacies of Filipino cultural history and love of country.”

Spearheading the celebration is the National Commission for Culture and the Arts.