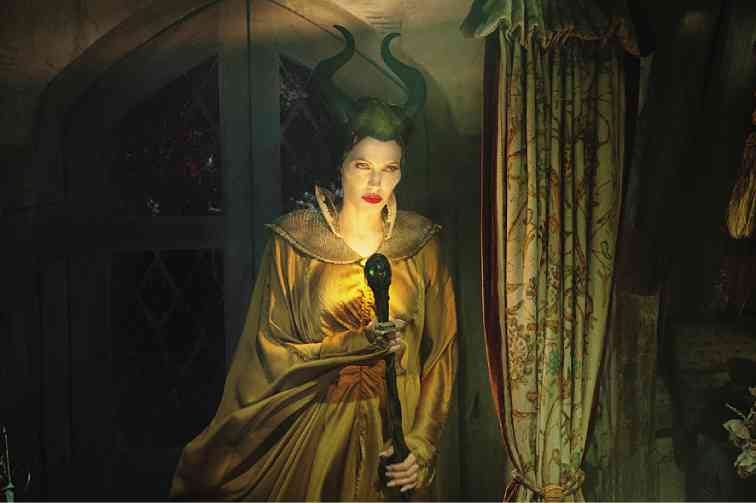 This year marks the 55th anniversary of the character who put a spell on young Sleeping Beauty in the animated feature released by Disney in 1959.

Since her introduction, Maleficent has been Disney’s all-time most popular villain. Now she returns in the studio’s live-action version of the classic story—and there’s a lot about her we never knew.

“I loved Maleficent when I was a little girl,” says Angelina Jolie, who plays the title role. “She was my favorite Disney character. I was afraid of her and I loved her.”

This duality intrigued producer Joe Roth as well. “This movie is about a character we’ve only known as hard-hearted, and our story answers the question ‘Why?’ I’d like audiences to feel like they’ve entered a world they’ve never seen before with ‘Maleficent,’ and I hope they come away feeling like no one is beyond redemption.”

“Maleficent” explores the untold story of Disney’s most iconic villain from the classic “Sleeping Beauty” and the elements of her betrayal that ultimately turn her pure heart into stone.

Driven by revenge and a fierce desire to protect the moors over which she presides, Maleficent places a curse upon the human king’s newborn infant Aurora. As the child grows, Aurora is caught in the middle of the seething conflict between the forest kingdom she has grown to love and the human kingdom that holds her legacy.

Maleficent realizes that Aurora may hold the key to peace in the land, and is forced to take drastic actions that will change both worlds forever.

The film is directed by two-time Oscar-winning production designer Robert Stromberg (“Avatar,” “Alice in Wonderland”), in his directorial debut.

The screenplay is by Linda Woolverton (“The Lion King,” “Beauty and the Beast”). Executive producers are Jolie, Don Hahn, Palak Patel, Matt Smith and Sarah Bradshaw.

The character was a Disney creation  introduced in the 1959 animated feature “Sleeping Beauty.” But the story of the princess who falls under a spell of eternal sleep has been told since the beginning of fairy-tale time.

The story of Sleeping Beauty evolved, under different titles, over approximately 400 years (1,000 if we count some overlapping elements from Medieval times). The early written origins can be traced from the French novel “Perceforest” (author unknown) written in 1527, to a tale by Italian storyteller Giambattista Basile (1636) called “Sun, Moon & Talia,” from a collection titled “The Tale of Tales,” generally accepted as the first collection of fairy tales ever printed.

In 1697, a version of the story “The Beauty Asleep in the Woods” was published by Charles Perrault in his book “The Tales of Mother Goose.” The Brothers Grimm borrowed heavily from this version in writing their   1812 story of a beautiful princess awakened from a spell-induced slumber, “Little Briar Rose.”

The origins of Maleficent as a female personification of evil are less clear. Basile’s story casts a Queen as the jealous, vengeful villainess, but she was married to the King and not an independent outsider who inflicted a curse on the royal family. The villainess was changed to a wicked fairy by Perrault, whose version was closest to Disney’s.

Perrault also introduced the element of a handsome Prince whose kiss could break the spell.

So it fell upon 20th-century writers and animators and actress Eleanor Audley to invent Maleficent for Disney’s classic “Sleeping Beauty.” The film took 10 years to make and cost $6 million. It was the most expensive movie the studio had produced at that time.

Maleficent remains both the favorite and most feared character in Disney’s gallery of infamy. Now she returns in a live-action version of the classic story.

Opening across the Philippines on May 28, “Maleficent” is distributed by Walt Disney Studios Motion Pictures International through Columbia Pictures.