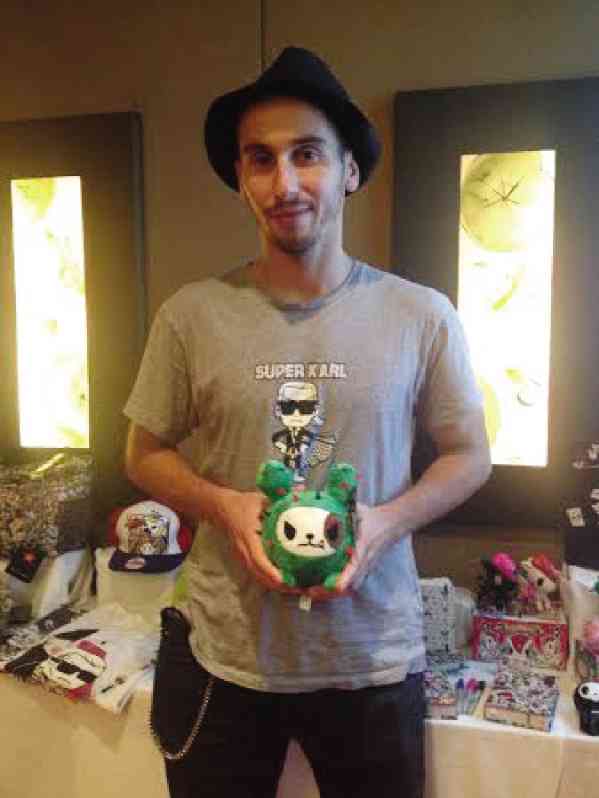 Meet the artist behind Tokidoki–and he’s not Japanese

To his legion of fans, Simone Legno is no less than a rock star. They tattoo his artworks all over their bodies, and entire families line up overnight for his meet-and-greets.

“Sometimes I’m embarrassed because they start to cry,” said the Italian creator of Tokidoki, who has a strong following among girls aged 16 up, and even a lot of young men.

For someone hugely successful and with a cult following, Legno, 36, is refreshingly humble. He grins shyly when asked about how crazy his fans can get.

This is the same man who made Karl Lagerfeld into a Tokidoki character, and who has collaborated with celebrities like Black Eyed Peas, and such formidable companies as LeSportsac, Smashbox Cosmetics, Canon, Levi’s, Guggenheim Museum, X-Box, Hello Kitty, Barbie, Skull Candy.

It’s a massive feat for a guy who created the now globally popular Tokidoki initially as a diary-website right out of design school in 2001, from his bedroom in his parents’ house in Rome.

Block (the shop will be there until June 15).

He had fond stories about his Filipino fans in the US, and even created a Tokidoki T-shirt for the benefit of victims of Typhoon “Yolanda.” It was his second visit here.

Growing up in the ’80s in Rome, Legno was quite fascinated with Japanese culture: Japanese TV shows and animation, cherry blossoms, chopsticks, speed trains, samurai.

“It really shaped me and influenced my childhood sketches,” he said. When he moved to Milan, he learned Japanese in night school, and traveled to the country for the first time at age 19.

“I’ve been there 32 times. I keep count,” he said, grinning like that young boy of the ’80s still enamored with the land of kawaii. Tokidoki literally means “sometimes” in Japanese.

It was around 2003 when an already successful American entrepreneur, Pooneh Mohajer, and partner Ivan Arnold began scouting for a new venture. (Mohajer was the cofounder of Hard Candy cosmetics, which was sold to LVMH in 1999, and is now owned by another company.)

She and Arnold stumbled on Legno’s website. At the time, it was getting 17,000 hits a day and was popular for its interactive games. He was doing work in advertising media, with clients such as Saatchi Saatchi, Leo Burnett, even John Galliano.

“We proceeded to stalk him,” Mohajer said with a laugh. They convinced Legno to move to Los Angeles in October 2003. In 2005, Tokidoki the brand was born.

“It has been a great journey. He’s extremely prolific and talented,” adds the Tokidoki chief operating officer.

“I was scared,” said the artist. “But I had to trust my guts. If you want to do something, you can’t do it all by yourself. Just like the Roman empire, it lasted centuries, but with partners.”

Tokidoki is a design company that’s into licensing classic products—T-shirts, shoes, collectibles and the like. But it’s now also involved in what Legno calls “experimental” projects, like the stamps for the post office of Singapore, and the slot machines of Sands Resorts and Casinos in Macau, Singapore and Las Vegas.

Such new challenges Legno finds “humbling.” “When we were doing the collaboration with Onitsuka Tiger, they would ask me where to put the stitching in shoes and things like that, and those are details that I’m not exactly an expert in.”

Ditto with his work with beauty retail giant Sephora, which netted $20 million in sales.

One of his most notable works is that with Lagerfeld’s brand.

“With Karl Lagerfeld, it was a shower of pride, an honor to do a live character,” he said. While he enjoys creating for a younger audience, he finds the high-end partnerships “more stimulating, for sure.”

To this day, Legno continues to create and add new characters to Tokidoki. He doesn’t just sign off on designs of an artistic team.

“Other brands, they just give a style guide and that’s it,” he said. “I create something new every season.”

“There’s also one thing about Tokidoki that other brands don’t have,” noted Marilu Corpus, CEO of Click! “Simone is an artist. As an artist, he has fans, so he has to please his fans. The fans are there because of his art, not because of the merchandise. He speaks to students and inspires them. When he does an exhibit in a mall, it’s for the primary delight of his fans. He’s multifaceted. There’s the art side, and for the marketing aspect, there’s the Karl Lagerfeld, which gives it value.”

Japan “took a bit of time” to accept Legno’s work, he said. Though he acknowledged that people characterize his work as “so Japanese,” the artist said that there’s also the American street-art influence to it.

His biggest fan base is in Hawaii, where the LeSportsac x Tokidoki was widely promoted. (He’s working on another one with the company.)

Counterfeits are understandably a major problem for brands like Tokidoki, but there’s one form of copying that both Legno and Mohajer don’t mind: hardcore fans who tattoo Tokidoki characters all over their bodies.

“I love those people!” Mohajer said, laughing. “We give them license to tattoo on their bodies.” The artist himself considers these fans “like brand ambassadors.”

Legno dreams of seeing his characters on an Asian airline, “since I’m always on planes.” When a tie-up doesn’t seem cool or too similar with another brand, he says no.

“I’m also a Roman guy, so I’d love to work with Fendi. High-end is now touching pop culture and vice versa,” he said. “We’re going to the next step. Others have been around 40 years. We’re only nine years old.”