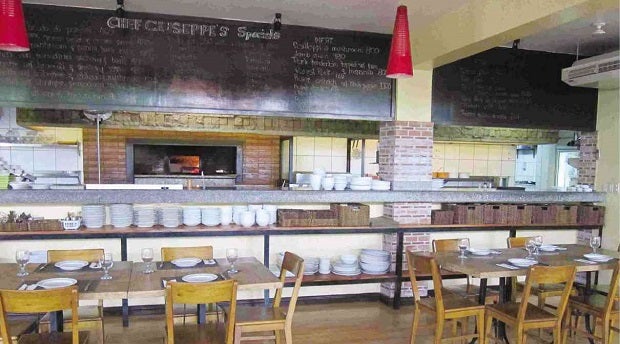 GIUSEPPE PIZZERIA AND SICILIAN ROAST One of the first crowd-drawers on Paseo Saturnino, its wood fire ovens bring out the best pizzas. PHOTO COURTESY OF JULIE VERGARA

One street, many eats

It takes roughly an hour to get to Cebu (not counting the long waits at the airport, in case you go through unexpected delays in air travel nowadays). In any case, it’s an ideal destination for a city girl wishing to have a brief escape.

The Labor Day weekend had me and a friend heading down to the Queen City of the South, for an overnight stay in the city of Lahug before proceeding north to Bantayan Island.

Although I’m no stranger to Cebu, it had been some time since I visited, and I was looking forward to what was new to discover.

A quick booking on agoda.com offered a great deal at The Henry Hotel, a quirky new establishment on Paseo Saturnino, at the entrance of the gated community of Maria Luisa Subdivision.

Having settled into the hotel, after suffering from near heatstroke at the taxi queues in the airport, I decided to take a look around my surroundings.

One side of Maria Luisa Road was still residential, while the other (where my hotel was located) had restaurants, cafés and wellness centers.

I had lunch on my mind so friends took me to Tymad Bistro (tymadbistro.com), which has already garnered favorable food reviews on various food blogs. If you’re in the mood for crepes, galettes (savory or sweet) or baked wonders, such as the often sold-out croissants, and coffee, prepare to spend hours shooting the proverbial breeze in this roadside café.

If you don’t like your hotel’s food, stock up on Tymad’s pastry offerings for a buttery breakfast or brunch.

The rest of the day was spent doing a quick tour of the city. Since my companion was a first-timer to Cebu, the heat proved to be a challenge and we stayed only in certain areas for a limited period.

Suffice to say, the highlight of the sightseeing was a magnificent view of the sunset from Tops on Busay Hill, although, after that, things were pretty much “downhill” since there wasn’t much else to do—unless you wanted to take a gazillion selfies from every angle of this outlook deck.

Heading back to Paseo Saturnino, we noticed Antica Osteria close to the entrance of our hotel. Intrigued, we found ourselves transported to what I would say is “wine heaven” as we were greeted by walls of all kinds of wines, which took our attention away from the tables and the dining customers. This was, for me, serendipitous. With an island-hopping trip set the next day, what better way to prepare than to stock up on wine?

We left with several Italian vineyards nicely bottled up and ready to be uncorked at our convenience. I did make a mental note that if we had more time, it would be a good idea to try Paseo’s food in the future. At present, the restaurant has no website, just various blog posts on dining and wining experiences.

I couldn’t find much else on this place although I made two assumptions—that the Italian man giving us his recommendations was one of the owners and, two, that the wine finds alone would make this cozy little restaurant a place that most would be happy to revisit, myself included.

As we set off early the next day for Bantayan, I remembered an old favorite, Giuseppe Pizzeria and Sicilian Roast (ristorante.wix.com/giuseppe), which is said to be responsible for the recent commercial developments on Maria Luisa Road.

Known for its wood fire-baked pizzas, Giuseppe’s has grown into a regular gastronomic pit stop for tourists and locals who rave about the authenticity of the dishes prepared by owner-chef Giuseppe Genco. It was a shame that I didn’t have time for a quick bite, and besides, it was way too early to carb out (especially before getting on a boat).

But I made provisions for snacks, purchasing local brand Pili & Pino granola in three different variants, as we were about to embark on a four-hour road trip before hitting the water.

There were other establishments that called me out as we pulled out of the hotel’s driveway—Moshi Moshi (Japanese) and Little Saigon, Big Bangkok (I presume a blend of Vietnamese and Thai food), not to mention the spas and delis that were spread out in this little strip.

If you have plans to stay in Lahug, and if your schedule is manic or you’re feeling a little lazy, billeting yourself close to or in the vicinity of Paseo Saturnino would lead from one world culture to another in just a few steps.