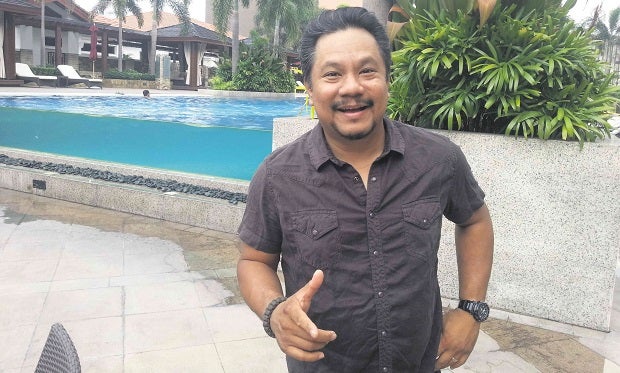 Rex Navarrete says being a comedian is part of Philippine culture, a “tradition and an honorable career to have.”

Born in Manila but already a US immigrant at age 3, Navarrete is back for two shows starting Saturday night at Bar 360 of Resorts World Manila and on June 4 at Strumm’s Makati.

In this interview he talks about intricacies of his job and why it’s important to have a life offstage.

You’ve been quite busy lately.

Yes, I had the chance to perform in London and New Zealand for the first time last year. And I returned to Australia. I tour regularly in the United States and Canada. My wife understands my being on the road a lot. My kids love to travel. I’ve always loved traveling, too. I got lucky enough to have a career which requires traveling.

Do you attract a mixed audience, or is it mostly Filipino immigrants?

It’s a mixed audience. In Dubai, I was worried about what kind of audience would show up… But it was no different than playing in Manila or Cebu.

But your humor is very Pinoy.

It’s the Pinoy expat kind of humor. It’s nice to know that Pinoy humor is pretty intact, wherever we go. It’s a smart sense of humor, really, at all levels… When I first started writing, it was about being Pinoy in America, being raised in an immigrant household… I obviously don’t do the more popular version of stand-up like the Vice Ganda style. It’s good for his audience… But it’s nice that my audience can also come to my show, and still laugh as hard.

You became a comedian because of encouragement from your college professor, right?

I realized I could make him laugh, and he could make me laugh, so it became a sport between us. We could outwit each other, very free-form, like what was going on in the moment… He picked on my ability to improvise. Then I started getting interested in writing for comedy, doing sketches. He encouraged me to get on stage and do 10 minutes. The first time ever was in 1989. I gave it a shot. It was terrifying. Stand-up is still hard. It’s not for the fainthearted.

They say that the first few minutes onstage are crucial.

Who told you that? That’s a lie. The whole set is crucial. It’s never easy, it’s one gigantic ramp. It’s a climb. There are some sweet spots, but it’s like climbing, it’s never-ending, the terror of captivating an audience through humor and stories, and making people laugh.

Who were your role models when you were starting?

Eddie Murphy. He’s the first guy I studied for writing, character, delivery, listening to the crowd, don’t talk over the crowd, let them have their moments because they need to laugh, let them finish laughing, then continue. I also discovered George Carlin and Richard Pryor … and then Chris Rock. Everyone’s writing has influenced me…

What about Pinoy comedians?

I grew up watching Dolphy, Chiquito, Tito, Vic and Joey, and later, the Apo Hiking Society. Noel Trinidad’s wife is my ninang, she’s really close to my mom’s side of the family. I remember summers when I got to watch the tapings of “Champoy.” So I also knew Subas Herrero, Gary Lising, the whole crew… Humor is part of our culture, our tradition… to be comedians. It’s a very honorable career to be in, especially during the Marcos era.

How do you prepare for a show?

I get enough sleep and save my voice. Not too much caffeine. Just enough.

If you take too much, your tempo is affected. I actually don’t drink coffee anymore, just an energy drink. One thing about comedy is timing. The technical aspect of it is timing. I just focus, no distractions. And I stay healthy. It’s a long-term career. You don’t want to burn out too soon.

What do you find difficult about stand-up comedy?

I think it’s one of the most difficult art forms because you’re incorporating several disciplines in real time. You’re the writer, producer, actor, director, sound guy … you’re editing on the fly, because sometimes your material is not working for your audience tonight, you’re tailoring it as you go. A lot of wheels are spinning. It demands your multitasking skills to work all at the same time. It’s still hair-raising, but when it works it pays off.

Does it pay well?

It can. You just have to spend wisely. But when it does pay, it pays surprisingly well. I’ve been able to support a family by telling jokes. What a privilege.

Is it true that comedians are serious people in private?

I think the best comedians are the serious types. I admire the ones who don’t have to be funny all the time. They’d be talking about serious stuff, then it shows in their material, it becomes hilarious. My buddies who now live in Los Angeles, I’m still friends with them because they don’t have to tell me jokes. They know I’m funny, I know they’re funny. We can just be buddies, talk about our kids, stuff that bothers us, or the new tool at Home Depot that we want to buy.

What do you do between shows?

I enjoy life. I have a normal life offstage. But I still take care of the business side, bookings, the writing, making sure I update my repertoire, but you got to have a life. I get worried about my comic buddies who have no lives. What are you gonna write about? Your life is going to clubs watching other comics, that’s not a life. ’Cause you got to write about life. You gotta have hobbies, interests, read up, watch the news.

I love being with my two kids. I love bringing them to school and picking them up, making their meals, doing projects at home like every dad does, I’m their maintenance guy. Doing everyday tasks. I’m 45 now, I gotta pace myself. I want to keep doing comedy at least for another 25 years, get my kids to college, then I can relax.

Rex Navarrete’s shows Saturday night at Bar 360 in Resorts World Manila and on June 4 at Strumm’s Makati will have Mike Unson as opening act. Call 8919999 or log on to ticketworld.com.ph