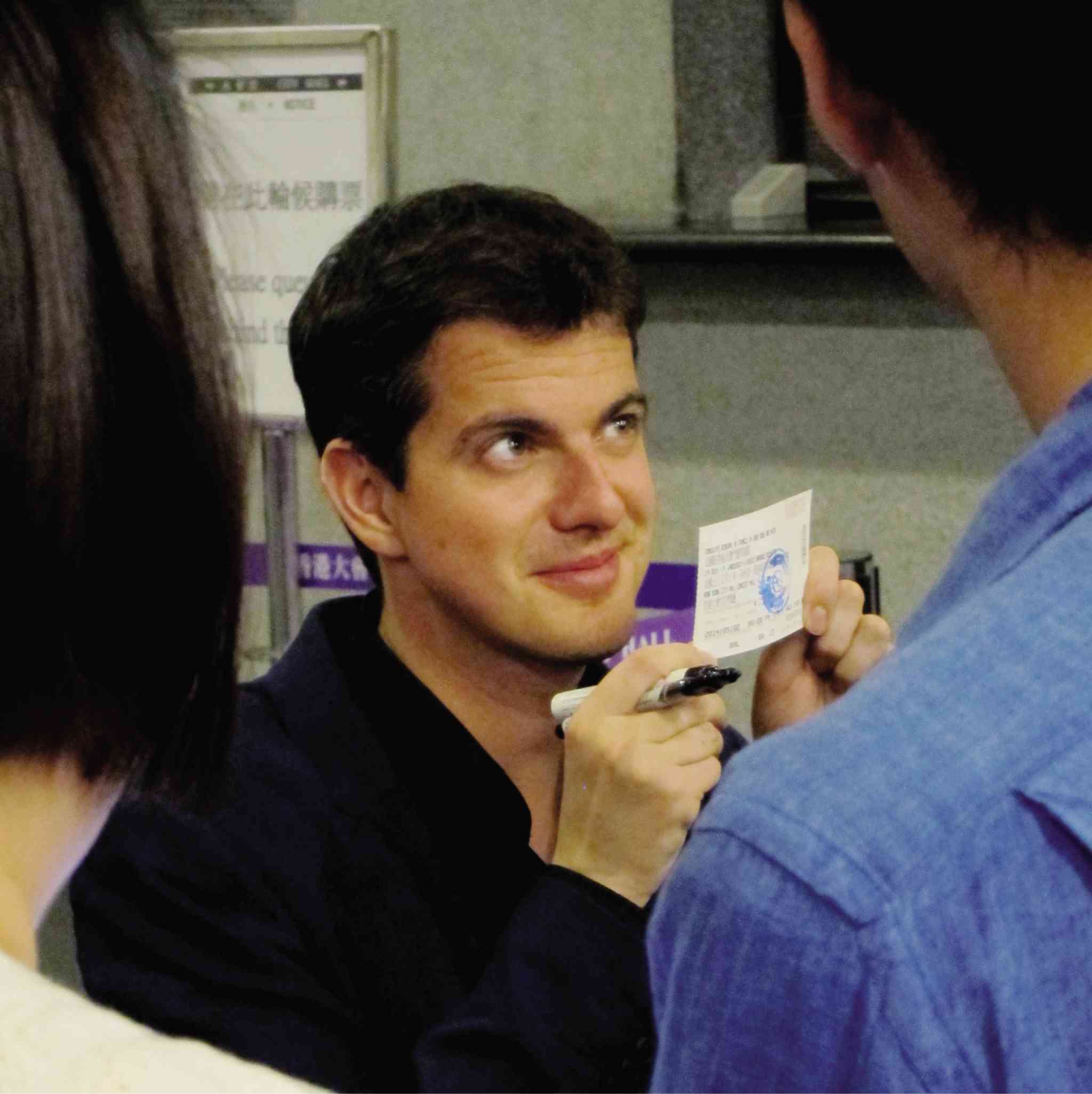 THE FRENCHMAN interacts with fans at the autograph-signing in HK City Hall. FRAN KATIGBAK

One review even dubbed him the Handelian Harry Connick Jr. (referring to the Baroque catalogue Jaroussky draws from), whose “presence is as smooth as silk.”

But he’s most known for his remarkable (acutely bizarre in grown males) talent of singing high octaves in a female voice.

“The world of the countertenor is a weird, high-pitched place, where the possibilities of the male voice are pushed to Bee Gees extremities,” wrote The Guardian’s classical-music expert Tom Service. (That’s comparable to Adam Levine, JT, Mika or “Glee” star Chris Colfer hitting sky-high notes.)

What makes the countertenorial voice (falsetto or head voice) peculiar is the polarity between the girlish-choirboy sound and the adult male endowed with it.

The range (similar to a contralto’s, soprano’s or mezzo-soprano’s) is suited to the Baroque repertoire popularized by the castrati. These were 16th-18th-century males with incredible singing power, their lungs of steel and the pureness of their upper register rendered by the physiological effects of castration before puberty.

In a New York Times article, author Fernanda Eberstadt said: “The countertenor is a 20th-century phenomenon, the approximation of an art that has luckily been lost to us.”

Jaroussky is a superstar among his contemporaries, one who attracts a loyal, transcontinental audience from a diverse demographic.

In fact, his recent opera-music concert “Philippe Jaroussky & Venice Baroque Orchestra—Handel vs Porpora” had sold-out tickets. Staged for the 2014 edition of Le French May cultural showcase in Hong Kong, the event held at the 1,434-capacity HK City Hall packed in a crowd of expats, locals, music students, professionals and fans from other Asian cities, with nearly all age brackets represented.

Jaroussky, who began his music career as an instrumentalist (violin, piano) and went into vocal training only in his late teens, has made Baroque music approachable and less intimidating.

Google “Lascia Ch’io Pianga” or “Vedro con Mio Diletto,” by Handel and Vivaldi, respectively, and primary results include Jaroussky’s interpretations captured on video and posted by fans on YouTube.

With a little help from social media, his recordings and concert tours help introduce the young generation to the music of Vivaldi, Antonio Caldara, Monteverdi, Handel and Nicola Porpora.

In 2002, just a few years after his debut as vocalist, Jaroussky formed L’Ensemble Artaserse, which performs with him in European tours.

At the Hong Kong concert, Jaroussky renewed the contest between Handel and Porpora, singing four arias from each master. Handel and Porpora wrote for rival celebrity castrati, Carestini and Farinelli, respectively. The composers also led opera troupes backed by members of feuding factions.

In February, before their Asian tour, Jaroussky and the Venice Baroque Orchestra performed the Handel-Porpora program at Metropolitan Museum of Art in New York.

The New York Times review by James Oestreich declared: “There are countertenors, and then there is Mr. Jaroussky… there is scarcely a sense of anything artificial in the vocal production. He sings with an ease and fluidity that you would think could come only from a natural voice. And that is before you lay on his keen intelligence and his tremendous artistry.”

The French vocalist was just as spellbinding at his Hong Kong performance, opening the program with vocal pyrotechnics in Porpora’s “Mira in Cielo” (from the opera “Arianna e Teseo”).

His radiant voice as well as elegant phrasing cast a spell in Handel’s “Mi Lusinga il Dolce” (from the opera “Alcina”), and conveyed heartbreak and despair in “Scherza Infida” (from “Ariodante”).

In Porpora’s “Alto Giove” (from the opera “Polifemo”), the French singer made a strong impression right from the first suspended note, and demonstrated his coloratura technique.

The program ended with two encore pieces. The first, “Lascia Ch’io Pianga,” was featured in the Oscar-nominated film “Farinelli” (1994); and YouTube videos of Jaroussky performing the song in previous shows have had over 3 million views.

We would be lucky should Jaroussky include the Philippines on his next Asian tour. The first edition, during the first half of the year, went to cities in Taiwan, China, Japan and Korea.

For now, we just have to be content with memories of his Hong Kong concert, and thankful that his fans supply social media with Jaroussky-related content we could use for our DIY lessons on music appreciation.

Get Le French May program guide and event schedules at www.frenchmay.com/en/.