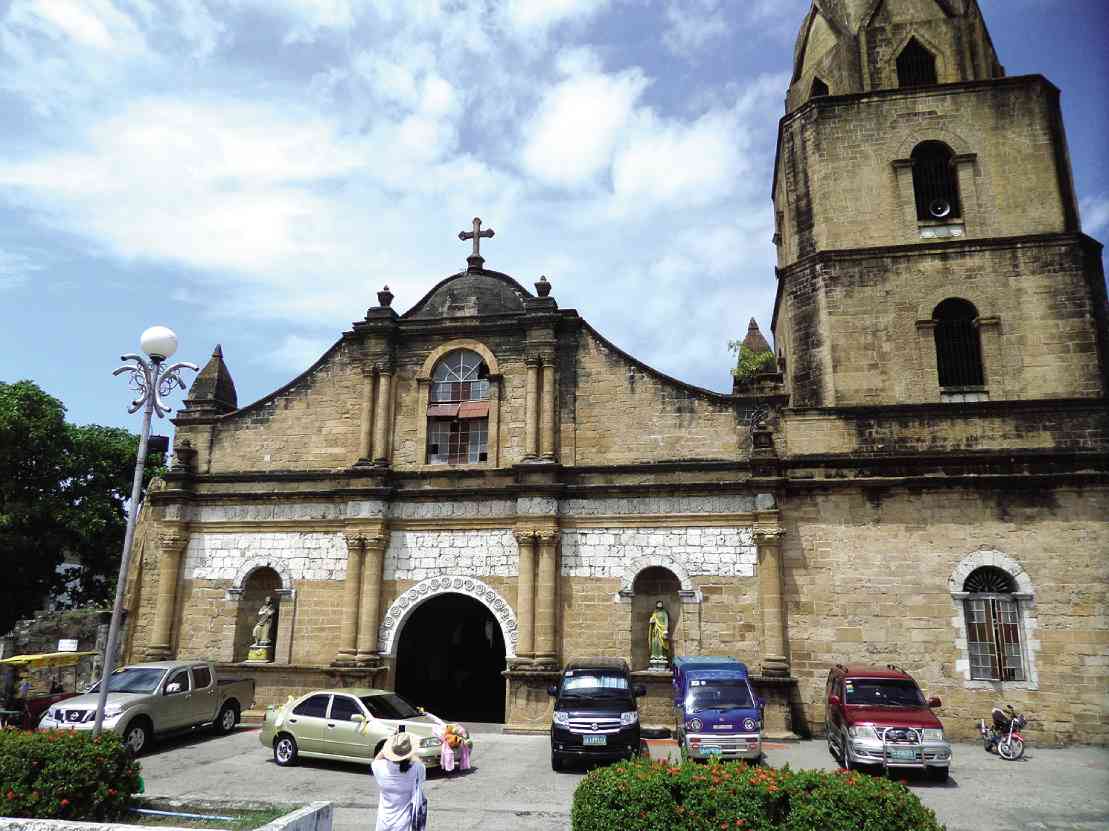 GUIMBAL Church has a less ornate facade compared to Iloilo’s other churches.

Time to go to Iloilo and Guimaras

With its many attractions, ordinary tourists will need more than a long weekend in Iloilo. There are centuries-old churches to visit, native delicacies to savor and shopping to do.

The fashionista will find local designers as creative and innovative as the better-known Metro Manila based couturiers, making the most of locally woven fabrics. A visit to Jaki Peñalosa’s boutique at Robinsons Place Iloilo, for instance, will reveal how far a local designer has taken the hablon, a traditional weave exclusive to Iloilo, blending it with the other Panay island “native,” the piña, silk, cotton and even polyester.

And, of course, there is the island province of Guimaras to explore as well. Known primarily for some of the sweetest mangoes in the country and even the world, it has its own beaches, delicacies and religious destinations to make a side trip a must for Iloilo visitors.

An apparently little-known fact is that Guimaras’ cashew nuts are better than those in other places. They do not leave an after-taste like the others.

But staying longer in one place creates a whole new problem—financial. How can you pay for comfortable lodging and still have money to explore or eat out to try all the native delicacies as much and as often as you want?

The Go Hotels chain of Robinsons Land Corporation offers a value-for-money option—not just for tourists but also for businessmen who may need to make several and extended trips to Iloilo, which is becoming a commercial and financial hub for the island of Panay and even for the whole Western Visayas.

Go Hotels’ “no frills accommodation,” as Adrian Ong, assistant manager of gohotels.ph puts it, is ideal for people who want a comfortable base as they explore Iloilo and Guimaras, as well as for business travelers on a budget.

The hotel also offers one of the most basic “necessities” people these days look for: WiFi connection. And it comes free at Go Hotels. Each room has its own safety deposit box, too.

Go Hotels Iloilo has 167 rooms, making it the largest provincial branch and second overall so far, and a hundred-seat function room, which Ong says is the biggest in the chain right now, a nod to the city’s growing importance in the region’s business arena.

Built as part of the Robinsons Place complex, the hotel “is at the center of the city’s commercial district,” says Robinsons Hotels Business Unit general manager Liz Gregorio.

The city’s award-winning public market is within walking distance and the popular La Paz Public Market is a short ride away. Deco’s and Ted’s at the market serve the well-known La Paz batchoy in its original recipe.

Public transportation to take visitors to other popular destinations, like the province’s historic churches, are also readily accessible from the hotel.

Go Hotels introduced recently an innovation for people looking for a unique and special gift for their dearest and closest. Ong says people can give Robinsons Gift Checks (RGCs) as presents, which recipients can use to pay for a stay in any of the Go Hotels throughout the Philippines.

“This is a convenient way to pay for one’s stay at Go Hotels,” says Ong. The RGC will be accepted at any branch in the country and it “can be used by Go Hotels guests who prefer to book in advance, as well as walk-in hotel clients. Guests can even use the checks to pay for their breakfast sets, toiletries, and even shuttle services to and from the hotels,” he says.

“The RGCs have no expiry dates and, like travelers’ checks, can be canceled when lost,” says Ong. “These are multipurpose and a handy way for frequent travelers to enjoy a safe, affordable and novel way of enjoying a vacation.”

He says the RGCs may even be used to pay for banquets guests may have to arrange in the hotels.

Reservations may be made through www.gohotels.com.ph.  Other details may also be obtained by visiting the website.