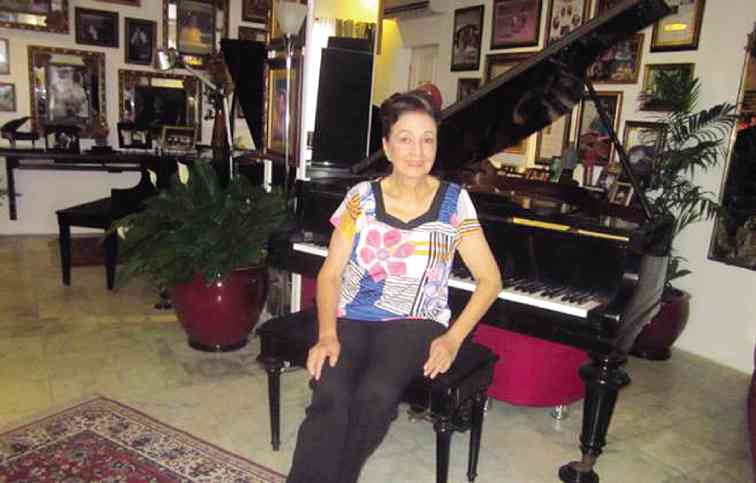 IN LOVE with performing for general public AMADIS MA. GUERRERO

Celebrated pianist Ingrid Sala Santamaria is commemorating 52 years of concertizing with a special concert on June 12, Independence Day, in—would you believe—“somewhere in the heart” of Tondo, Manila.

“I fell in love with performing for the general public,” says this aristocratic, Spanish-speaking mestiza from Cebu. “That’s why I chose Tondo.”

But there’s a caveat. The hush-hush concert is strictly invitational, with special arrangements for those who don’t have cars. And it will be held in an ancestral home of an anonymous friend.

More public will be a follow-up  concert at Ayala Museum, Makati City, July 20, with the Manila Symphony Orchestra under the baton of Arturo Molina.

In both events, two CDs by the maestra will be launched, each with the MSO and each containing three piano concertos by the masters: Tchaikovsky, Chopin, Rachmaninoff, Grieg, Liszt and Schumann.

The pianist’s 50th year of concertizing was actually held in Cebu City two years ago, but Ingrid considers the forthcoming Manila concerts part of her golden anniversary.

In honor of the occasion, she invited this writer and pianist Jonathan Arevalo Coo, her good friend and protégé, to a guided tour of her well-appointed memorabilia house in an upscale subdivision in Sta. Rosa, Laguna.

There are photos of Ingrid as a one-year-old baby in 1941, with her late husband, businessman José Santamaria, her four children and 16 grandchildren. There is a premiere-recital photo with her mother, piano teacher Pilar Blanco Sala. Ingrid here is 10 years old.

A big video screen shows the pianist performing her concertos with the MSO.

Each wall is accompanied by documented reviews, articles, press releases, posters and programs in both hardbound book as well as soft-cover. This is capped by a large coffee-table book which is “a work in progress,” documenting as it does the progress of the pianist’s long career.

A rare photo  shows Ingrid taking a bow at the old Rizal Theater with Dame Margot Fonteyn—no less—behind her. This was in 1962, the first visit of Fonteyn to the Philippines, and Ingrid was piano soloist of the Quezon City Philharmonic Orchestra conducted by Dudley Simpson of Britain. Fonteyn’s dancing partner, a Briton, is beside Ingrid.

The highlight of the ’70s was Ingrid playing the “Yellow River Concerto” in honor of the visiting Chinese Vice Premiere Li Hsien Nien, with the Cultural Center of the Philippines Orchestra conducted by Luis Valencia. This was at the Philippine International Convention Center.

One solo photo during the ’80s stands for her many performances as soloist here and abroad. It was the cover of a Lifestyle Asia magazine.

The ’90s were devoted to developing the Cebu Youth Symphony Orchestra, while the first decade of the 21st century was special because of the tandem concerts with Reynaldo Reyes, at one time totaling 40 concerts in one season.

The Golden Pianist Anniversary Concert was held in the ballroom of the Marco Polo Plaza Hotel in Cebu in 2012, with Joy Cristobal of The Lyric Piano Co. transporting a brand-new Shigero grand piano from Manila for the occasion.

Not content with her laurels, Ingrid even now is “dreaming” of more concerts after July, and more CDs with another six piano concertos. Awesome.