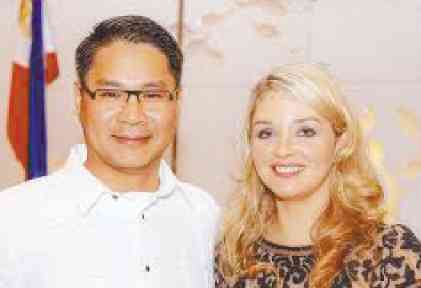 The Ambassador of Canada Neil Reeder and his lovely wife Irene hosted a reception at the Santa Maria ballroom of the Radisson Blu Hotel with a double purpose.

First, it was to honor Robert and Anna Lee, on Robert’s retiring as Canada’s honorary consul in Cebu after 15 years. He and Anna have been lauded for their dedication and self-abnegation.

With them on this occasion were their daughters Aileen Lee and Ranee Lee who live in Canada and came home just for the occasion. Robert and Anna will eventually retire in Toronto to be closer to them and the grandchildren.

Second, the reception was to introduce Canada’s honorary consul designate in Cebu, Katherine Goshulak Rivera. She was with her husband, Roy Rivera, whose family is very prominent in General Santos City (Cotabato). They are tuna fishing magnates.

Present were her parents, Ron and Lynn Goshulak, who traveled all the way from Saskatoon, Saakatchewan. Roy’s equally proud parents, Rodrigo and Dolly Rivera, attended with their daughter Debbie and her husband Deonie Riveral.

The next diplomatic event in Cebu will be on June 20 when the Ambassador of France Gilles Garachon and his wife Isabelle host a formal dinner in honor of Michel Lhuillier, honorary consul of France in the Visayas, at 7 p.m., at La Maison Rose.

The occasion is to celebrate the conferment on Consul Lhuillier of the title “Chevalier dans l’Ordre de la Legion de Honneur.” Founded by the Emperor Napoleon, it is the highest order of chivalry granted by the Republic of France.

Aside from being France’s honorary consul, Michel is president of Alliance Française de Cebu which he staunchly supports in all its endeavors. It has its headquarters at La Maison Rose, which also houses a fine French restaurant.

Numerous students study there to learn French and obtain jobs in Canada, especially in Quebec. The professors are French, and Alliance Française de Cebu facilitates the qualifying exams from the French Government.

These will be busy days for Alliance. On June 19-20 is the 19th French Film Festival to be held at Cinema 1 of Ayala Center Cebu. For retrospective films, with subtitles in English, will be screened. Admission is free.

On June 21, Alliance Française de Cebu presents Fête de la Musique on its seventh year in a row. There will be simultaneous events in three different venues featuring various bands and musical groups playing all manner of music. Two DJs are coming expressly from France—DJ Jon Attends and DJ Mat.

World Music Day on June 21 blasts off in Cebu at The Terraces of Ayala Center at 4 p.m. Then at 5 p.m., at La Maison Rose at 371 Gorordo Avenue beside the Mormon Temple; and finally at 6 p.m., at The Walk. Admission is free to all three.

A wine-tasting party at Bibendum Wine Shop in Banilad is always a lively affair as it gathers a happy crowd chosen by Kaye Sala and Cybill Gayatin of A-List. The latest was hosted by Bibendum Wine Merchants owner Margie Richards Taylor and her son Hans Eulenhofer.

Dubbed a “blind tasting” experience, it featured Californian and Washington Valley wines, five of them in unlabeled bottles laid out at a special table. You tasted one gulp from each and identified two white wines—Sauvignon Blanc and Chardonnay; and three reds—Shiraz, Merlot, and Cabernet Sauvignon.

It was as much fun being a contestant as watching. Whoever scored perfect would get the coveted prize, a thermovan. That is a portable cooler which keeps wine perfectly chilled. In this case it came filled with three bottles of Premiere Bulle and two champagne flutes.

In celebration (advanced) of the declaration of Philippine Independence by Gen. Emilio Aguinaldo 116 years ago, on June 4 the Marco Polo Plaza Hotel hosted a special dinner in its Manila room.

General manager Hans Hauri commissioned the hotel’s consultant on Filipino food, Jessica Avila, to come up with an eclectic menu reminiscent of the era. She complied and dubbed it “Comida de la Independencia.”

Special guest was Roman Ripoll, sales and marketing manager of Tabaqueria de Filipinas, maker of La Flor de Filipinas cigars. He brought an expert tobacco leaf roller to demonstrate what many thought is a lost art.

The special dishes introduced that evening and more have featured in the lunch and dinner buffets of the hotel’s Café Marco, on up to June 19.

The next culinary journey at the Marco Polo is the eighth edition of “Sabores de España” which opens on July 10, with Gema Luisa Pido as consultant for the Spanish dishes which year in year out attract the largest number of patrons to Café Marco.