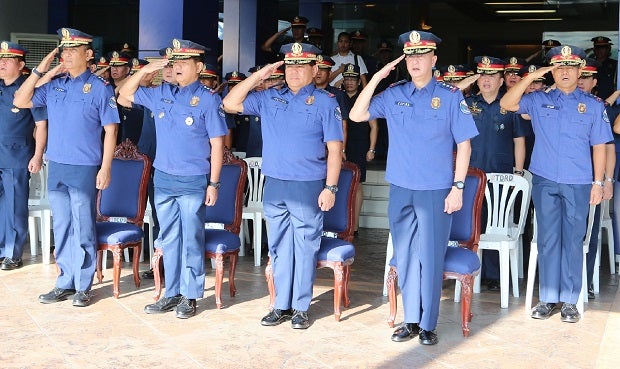 MANILA, Philippines—Before it was khaki, then dark blue. Reportedly starting this year, cops will be donning light blue uniforms.

Recently, Director General Alan Purisima, Philippine National Police (PNP) chief and the rest of the command group started the field testing of the proposed police uniforms during a flag-raising ceremony in Camp Crame.

But wearing of the uniforms would not be cascaded down to lower police units until the PNP gets the approval of the National Police Commission (Napolcom) and the Department of Interior and Local Government (DILG).

Unlike the standard PNP dark blue uniform, the new design strips off the shoulder loop and the pinned name plate, which is now embroidered on the uniform.

According to Chief Superintendent Reuben Theodore Sindac, PNP Public Information Office chief, the new set of uniforms would serve as the office attire of policemen nationwide.

A separate patrol uniform will also be designed for cops who are on the field.

“It should be functional and durable to allow policemen perform their jobs comfortably. It should also command respect and it must be something that you can be proud of,” Sindac said.

But the police assured that it will not shell out additional cost for the production of new uniforms.

“Every three years, each policeman has a replacement clothing allowance of P14,000 to buy new clothes,” the police official explained.

Sindac said the field testing of new uniforms will continue but the PNP hopes that by the end of the year, the changes will be applied to the entire police force.

To avoid imitations of the new police uniform, he said the uniforms will have a distinct security feature that will be “hard to copy.”

“We can also do supply audit and field inspection on weekends to determine the compliance (of suppliers),” he added.