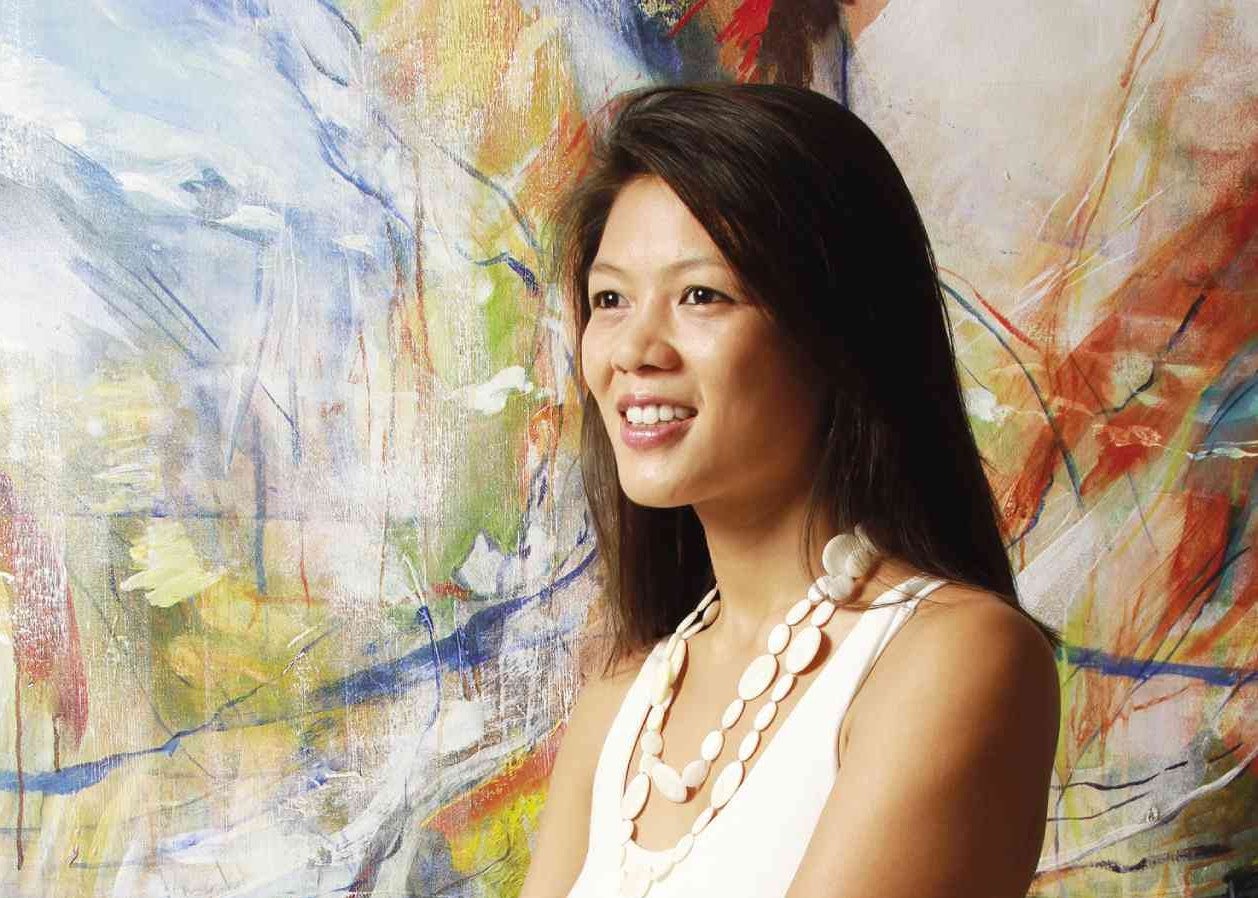 BENITEZ: “I have found a way that allows us to take charge but at the same time surrender to something greater .” PHOTOS BY NELSON MATAWARAN

Dapples of white over a rampage of reds, oranges and yellows characterize the canvases of US-based Filipino artist Jana Benitez. On second look, ambiguous figures surface, as though trying to break loose from the heavy veil of warm colors.

Benitez’s new works illustrate her metaphysical journey. “What am I trying to make in an abstract work? That is exactly what I am letting go of—the will to say that I want to create this theme or use these colors, etc. I’m letting go and allowing something greater than I am to express itself. I’ve began to practice having a dialogue with that Greater Intelligence.”

This harnessing of energy is reflected in the title of her 17th solo exhibit, “Life Force,” which opens on July 14 at the Ayala Museum. Benitez refers to the life force as “the weft that weaves all things.” She adds that this creative source is available to everyone if allowed to flow freely, instead of being blocked with emotional baggage and fears.

At the tender age of 12, Benitez revealed her prodigious talent that impressed family and friends. In 1998, the adolescent debuted at the Ayala Museum. She made news back then on account of her pedigree. Her father, Jose Conrado “Joly” Benitez, developed social programs during the Marcos era and was president of the family-owned Philippine Women’s University. Her mother, the former Joanne de Asis, is an influential investment banker in New York.

The artist, now 28, recalls, “People saw my work and said, ‘Why not have an exhibit?’ It was like asking a kid, ’Do you want a birthday party?’ I just went for it. I was painting mostly faces that were full of emotion [though] childlike and raw.” She said her work today still invokes that same childlike wonder and simplicity imbued with depth.

Benitez acknowledges the privileges guaranteed by her family name, but she has always sought for something deeper.

“I have been selling artwork since I was 12. In those early years, I gave all proceeds to charity. I didn’t know what else to do with it. It was overwhelming for me,” she said.

“During my first eight years of shows through my teens, the only way I knew how to be authentic as a youth who was searching, was to rebel against the reality I was born into. I went to immerse myself in different realities. But I’ve since learned to embrace my fortune, what has been given to me.”

After high school, Benitez went backpacking across Europe. She camped in a teepee outside Mexico, sought enlightenment at a Daoist temple on a mountain in Wudang, China, and communed with nature in New Zealand. Instead of retrieving the Park Avenue lifestyle, she has been residing in Brooklyn, where she continues to produce her artwork.

“All those different modes, particularly [time spent with] Nature, reminded me to break out of my mold,” she said. “Everything that I’ve studied and experienced just feed into my art.”

Benitez has done shows for galleries in New York, Berlin, Singapore, and Manila. Pieces were not acquired owing to friendly connections alone. Billionaire Enrique Razon, one of her avid collectors, prominently displays her works at the Solaire Casino Hotel. Likewise, her paintings add life to the boardrooms of SGV Foundation and Transnational Diversified Group.

Evidently, the artist attacks the canvas with restless energy. Her brushworks are extremely varied—from lashes to sweeps, lacelike patterns to rough strokes, overlaps to open spaces. Although the strokes seem to rave and rant, the images are fully understood when the viewer looks at them with focus.

The works evoke Benitez’s creative process and collectively serve, somewhat, as a private journal. Figures are initially obscured by masses of colors and lines that explode in different directions. These seem to symbolize Benitez’s coming to terms with her destiny by freeing herself from social conventions, creative blockage and emotional hang-ups, instead of confronting them like many other artists do.

Solemnly regarding a painting of two vague androgynous faces covered with furious strokes and piles of fiery colors contrasted with black, Benitez remarks, “It’s amazing what comes out of these paintings. My practice is focused on getting out of the way. I’m not willfully creating anything in particular. I’m just as surprised as anyone might be, looking at them. Where did these faces come from? Who are they? What do they mean? I spend hours having that inner monologue.”

She explained that in painting, she set aside her ego and her rational mind, giving into her creative energy.

“My work in the past would go into that unknown territory—finding something, bringing it back, making it pretty, telling a story, making a figure, a face and making it understandable to me and to the viewer. Now, it’s not about making paintings; it’s about making something else. I wanted to make sense of that—I kept going with that feeling. The paintings have this feverish passion that keeps rolling like the waves of the ocean. There is the constant shattering, surrendering and giving up all ambitions, desires and preconceived notions.”

“That is what my work helps me do, what each piece is about,” she added. “I’ve come to realize that the spiritual practice of letting the life force, intuition and passion—things greater than us, really—come through us, is actually rooted in us.”

Benitez likened colors to emotions; and the use of intense shades and clashing strokes, to awakening people.

“It’s easy to numb ourselves with entertainment, spend time with cheap distractions, then go into denial,” she said.

“Most people tend to shy away from the depth and breath of feeling. We are open to emotions that we enjoy, like happiness and love. But we avoid loss, abandonment, fear, panic and anxiety. Painting allows me to really plunge into the heart of everyday life. The prospect of new experiences and emotions stimulates me. The intensity comes from getting right there and wrestling with the difficult stuff. Fear is excitement. Painting helps me face it.”