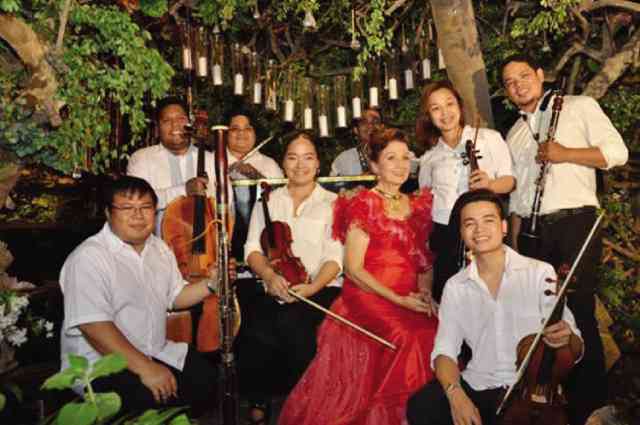 INGRID Sala Santamaria with ensemble of players in Tondo

The CD series was launched recently in Tondo, Manila, and in Cebu City. There will be another launch on June 25, with a performance with the Manila Symphony Orchestra under conductor Arturo Molina.

During the Tondo launch, Jeffrey Solares, MSO manager,  said the CD recording was done last February and March at the Cadd Auditorium of  Faith Academy in Cainta, Rizal,  known for its superb acoustics. Holland Buela was the recording engineer.

The result is, as Solares said, “a benchmark in Philippine music history.”

Performance followed in another chamber of the Tondo house that was dedicated to  Santamaria.

On an upright piano, Santamaria dished out refreshing strains of Rachmaninoff’s  Second Concerto and the first movement of Tchaikovsky’s Concerto No. 1, arranged by Solares for an ensemble of eight musicians. 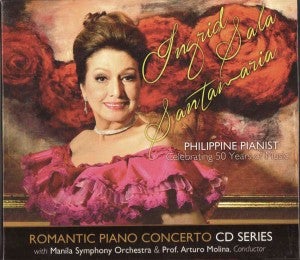 The venue was lush and  made al fresco by a tree towering  in the middle. Fresh flowers abound, and, at the end of the concert, butterflies were let loose to flutter on the tree’s branches.

Initially released on a limited edition, the CD series is available at select stores of the Lyric Piano and Organ Corporation, said Joy Cristobal, Lyric president.

Filipino baritone Jerome Sibulo, who is pursuing a doctorate in Musical Arts, Vocal Performance, at Indiana University’s Jacobs School of Music, performed in “Hoosier Connections,” a showcase of contemporary opera.

Presented by Intimate Opera of Indianapolis last June 7 and 8 at the IndyFringe Theater, the showcase had Sibulo singing the roles of Charon in Scott Perkins’ “Charon” and Joe in Bill Kloppenburg’s “Fear Not the Robot.” Both were Midwest premieres.

Of the Perkins opera, critic Chantal Incandela of Nuvo News wrote that “Sibulo sang the title character with conviction and intensity fitting the story, about the ferryman in the underworld, ushering people on to his boat.”

Another critic, Jay Harvey, former columnist of Indianopolis Star, wrote in Jay Harvey Upstage: “More searching in its implications was Scott Perkins’  ‘Charon,’ presented in its two-piano-arrangement premiere in this production. A character study of the legendary ferryman to the underworld, the work in this performance benefited hugely from the committed portrayal of the title character by bass-baritone Jerome Sibulo.”

Critic Tom Alvarez of Examiner.com wrote: “’Charon’ was the most compelling opera in the program. It is by local composer Scott Perkins, and is based on the story of the ferryman of Hades, in Greek mythology, who carries souls of the newly deceased across the river Styx. But in this adaptation there is a twist. Humans have all died, due to circumstances associated with a modern world that is falling apart, so Charon has no more passengers to deliver. Bass Jerome Sibulo turned in a dynamic performance as Charon.”

Before his Indiana performances, Jerome was last heard as a soloist in Lucio San Pedro’s oratorio, “The Redeemer,” at  Tanghalang Pasigueño in Pasig City last December.  He performed with the combined choirs of Coro Pasigueño and Faith Gospel Singers, conducted by this writer.