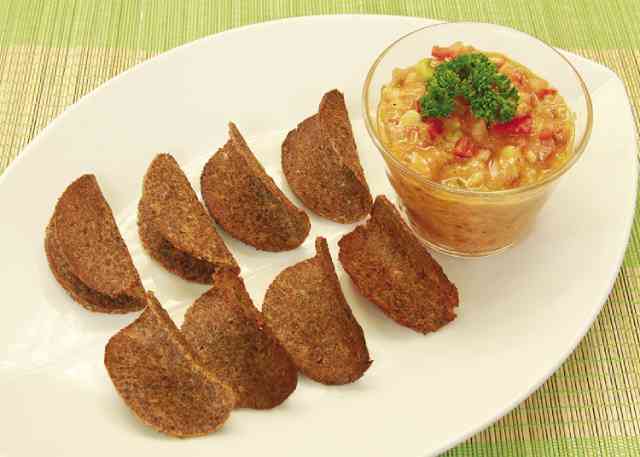 TACOS made from flaxseed. NELSON MATAWARAN

Eating healthier is a lifestyle choice

Moving from a house in Forbes Park to a condo in Mandaluyong also meant a lifestyle change for entrepreneur Sylvia Cancio.

At La Manille School of Esthetics and Wellness in Makati City, Cancio used to keep food delivery fliers. “I’ve had fresh food all my life. I would just go home for lunch since school and work were close by. Now that I live in Mandaluyong, I got into a lifestyle of ordering food and thinking of what to eat.”

But most food deliveries are made for convenience and tend to be low in nutrition. Cancio’s orders were cooked in trans fats, vegetable oils with hydrogen to prolong shelf life and improve the flavor.

She got worried because trans fats tend to raise bad cholesterol levels.

To regain her healthy eating habits, she converted the stockroom in the Cancio compound on Chino Roces Avenue into a vegan restaurant, the Live Kitchen.

Then there’s the vegetable roll with a crepe, made from vegetables, miso and soy. The air-dried eggless crepe is enriched with flaxseed which contains essential fatty acids, antioxidants and fiber.

So she started offering familiar dishes but without chicken, pork and seafood. The mung bean soup and eggplant with miso are modest ways to initiate people into a meatless meal.

“I wanted the food to be simple. I used to teach cooking and baking. I know a lot of recipes for meat, fish, cakes and desserts.  So I changed the menu from raw food to vegan. When people eat here, they are happy,” says Cancio.

Other popular items are the vegetable curry with coconut cream and the vegetarian paella cooked with vegetable broth, saffron, assorted vegetables and roasted cauliflower for a smoky flavor.

Cancio’s homemade Pinoy desserts get two thumbs up. Coconut reina blanca is a creamy pudding made of coconut milk and agar-agar. People also like the halo-halo with almond milk and thickened with chia seeds for slight nuttiness.

Cancio’s foray into the healthy lifestyle began in New York where she owns a healthcare business. She once tore her knee and couldn’t walk. Most of the doctors opted for surgery.

One day, she came across an Argentine instructor who taught the Gyrokinesis method. Emphasizing continuous, flowing and circular movements, the exercises are designed to maximize the body’s movement capacity. After several months of training, she was healed and even took up the teacher training course.

In the course of her Gyrokinesis and Gyrotonic (with a machine for resistance) conditioning, she came across Quintessence, a popular raw food restaurant across the workout studio. Cancio spotted celebrities such as Julia Roberts and the cast of “Sex and the City.”

She then took up raw food cooking classes with the restaurant owner. According to raw food enthusiasts, cooking depletes food’s nutritional content and heat ruins its natural enzymes, which facilitate digestion. A “living food” diet boosts energy levels and prevents or cures diseases.

Cancio recalls that for her final exam, she had to get a recipe from a cookbook and mimic its taste using natural ingredients. “I had to interpret satay. I discovered the chicken mushroom which you chop into cubes like meat and put peanut sauce,” she says.

After living on a raw food diet, Cancio experienced the difference. “In the past, I ate a lot of sugar. When I went to raw food cooking class, I felt so high. Every time I cooked something, I felt alert. When you eat something as close to the ground, you get all the nutrients and enzymes that go directly into the bloodstream. You feel energized,” she says.

Cancio came home in 2011 to establish La Manille School of Esthetics and Wellness to teach aestheticians, salon and spa owners international standards for beauty treatments. She also opened a raw food restaurant in front of ABS-CBN, thinking she could tap the celebrity market the way Quintessence did in New York. The business lasted only a few months.

She tried advocacy again, though the Live Kitchen is more of an extension of her household. “Your body still looks for cooked food,” she says.

She still shuttles to the States for her healthcare business. “My life is about health. I’ve got the Live Kitchen for food, La Manille for beauty, BrainHQ for the mind and gyrotonics. They’re all coming together.”