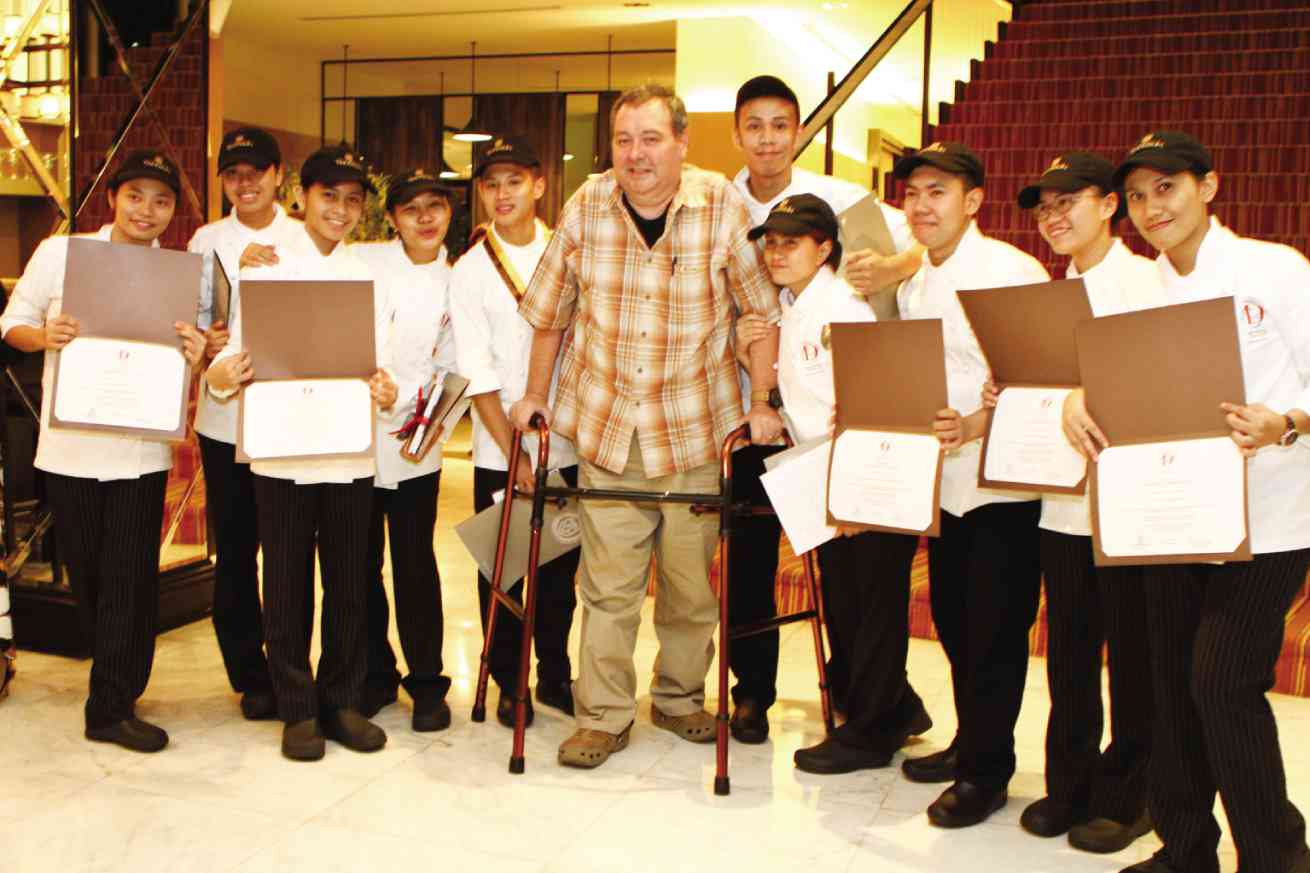 CHEF Jean-Pierre Migné, one of the mentors of the Ducasse Institute Philippines scholarship program, with the graduates

Sometimes dreams do come true. Even the wildest ones.

“Gusto ko lang makapag-aral  (I just want to study),” said a scholar of Tuloy Foundation—an organization that sends street children to school with a special curriculum designed to rehabilitate them through a systemic approach for growth and development.

Last year Enderun Colleges partnered with Tuloy to give 10 kids scholarships at Ducasse Institute Philippines, with the opportunity to be trained by chefs who work with Alain Ducasse himself.

The dream of “just studying” was realized with not an ordinary diploma but a Ducasse Education Certificate in Culinary Arts. The kids are now equipped with excellent kitchen skills at par with some of the best cooks in the world.

These skills were tested at the kids’ recent “graduation dinner.” The quiet sophistication of Ducasse techniques were evident in the dishes. What looked like an ordinary shrimp salad was a Seafood Veracruz that Bel Castro, assistant dean at Enderun who has had some Ducasse training herself, was audibly awestruck.

“Look at this,” she said, lifting a lettuce leaf that had been cut in the shape of a clover. “They had to cut it in this same shape for all 40 plates!”

The consomme was as good as what you would find in a five-star hotel. The Moroccan Spiced Beef Tenderloin was seasoned well and oh so tender. And the Menton Lemon Tart, Bel attested, was as fine as you would find in any other Ducasse restaurant.

All these were cooked by the graduates, who are between 18 and 21 years old. They had no prior training in the kitchen. They learned everything within less than a year: eight months under chef JP Migne at Tuloy Foundation; and three months under chef Cheong Yan See (fondly called Chef See), Enderun Colleges culinary head, at Ducasse Institute Philippines.

In such a short time, through the generosity of people who provide the money—studying at Enderun can be very expensive—the scholars leave not only with their dreams fulfilled, but also gain lifelong friends, wisdom from mentors, and knowledge and skills that can never be taken away from them.

But the journey does not end there. The kids will be entering the real world with internships at highly respected restaurants. They have been accepted at Vask, Chateau 1771 and the yet-to-open Soprano; and four of them will be deployed to Dubai to work at no less than the Four Seasons Hotel!

The four Ducasse Institute interns won’t have to worry about Filipino food cravings when they get to Dubai because Tapa King is now in the United Arab Emirates—with a branch in Karama, Dubai, because of the growing population of Filipinos in that city, which is said to be nearly a million.

Tapa King also plans to open branches in other countries. It’s a royal Pinoy conquest of the world: one Tapa King at a time!

Speaking of “kings,” I would like to give a shout-out to the chief of our family, Ephraim Cuadra Salcedo. While I credit my Bulacan roots for my love for flavor, I thank my dad for exposing me to the best restaurants when we were younger. One of my fondest memories was when he pointed out the difference between rare and medium-well steak at the Waldorf Astoria’s Bull and Bear, even as he wore the table napkin like a bib (as he always does). Belated Happy Father’s Day to all the dads out there!