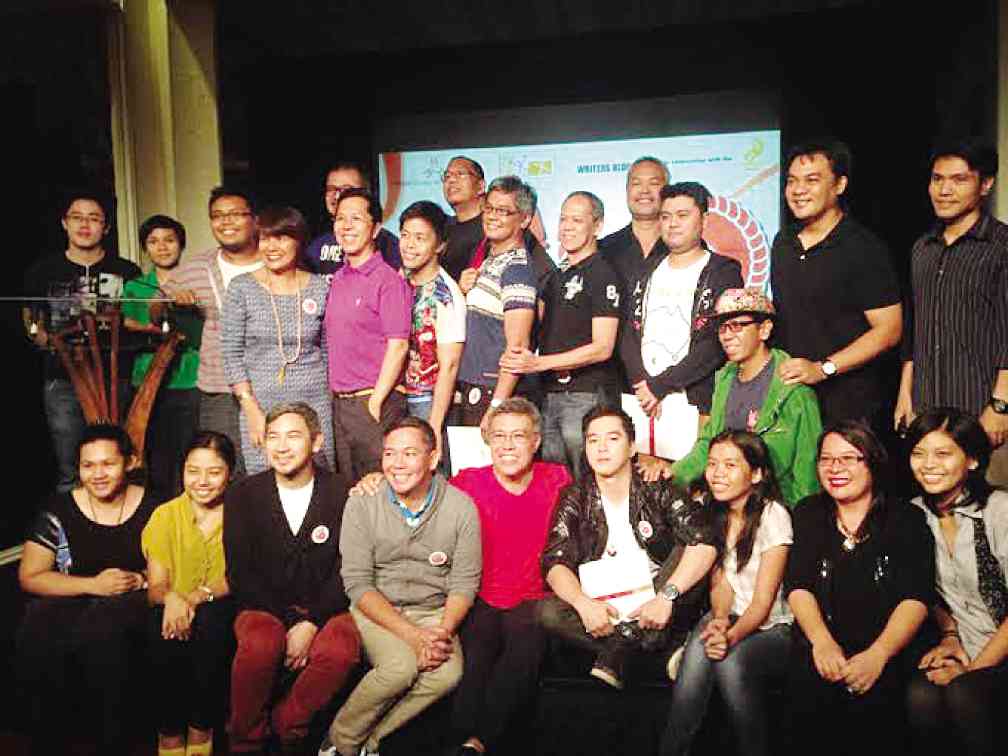 10 years of the Virgin Labfest–why it matters

The first time former Tanghalang Pilipino artistic director Herbie Go and I talked about doing “something that we really, really want to do” was just after a Tokyo-held Asian theater collaboration we both participated in (with director Jose Estrella).

A good friend and a member of that collaboration, Josh Fox of the WOW International Theater in New York, visited us immediately after and gave a theater workshop at the CCP. We took the question Josh posed to the actors in the workshop: “What is it that you really really want to do in theater?” This, I believe, is what spurred Herbie and I to start the annual Virgin Labfest.

The “semi-professional” theater companies I knew pretty much had their seasons lined up a year or so ahead of time. And except for Peta (but not anymore, too!), there was no theater company that had a playwright’s development program that nurtured new works for the stage. All plays were either commissioned, “devised,” rediscovered or imported from abroad to fulfill a planned season thrust or rationale.

Being the head of Writer’s Bloc, a group of playwrights based in Metro Manila, I casually mentioned to Herbie an idea about getting a small venue for staging new plays. Nothing fancy. Bare bones. Focusing on new works: one-act plays.

Herbie immediately responded. June or July seemed a pretty loose schedule for Tanghalang Pilipino, and, as we later realized, for a good number of theater companies as well. Since their calendar years coincided with the school year (for obvious marketing reasons), these were the least hectic months for actors, directors and theater artists—just after the summer workshops and right before the initial offering of their respective seasons.

Here’s where we found our small opportunity. Actors and directors were looking for something new to work on, something that’s not bound by season thrusts and rationales. The Writer’s Bloc playwrights, meanwhile, had a pile of plays that, up until that time, might never be produced and only collect dust in their baul—or, if fortunate enough, in the baul of some literary competition.

Herbie worked fast. I sent him scripts, he threw a good deal out. Our deliberation became a little intense. I was pushing for a festival, and I got the impression all he wanted was a trilogy (for him, that was all that’s worth doing). I told him, these plays don’t have to be classics at one go. It will take time, I clarified. And if we didn’t get a chance to do this again, well at least, we fulfilled Josh Fox’s workshop question: “What do you really, really want to do?”

It was just about getting that creative high going. Anyway, everybody, and I mean everybody, was willing to do it for free! Herbie cleared his throat and, finally, we chalked up eight one-act plays on the list.

Through the messy but high-spirited rehearsal process, actors and directors from various companies got to work with each other on an equally unfamiliar script in an atmosphere that encouraged an exhilarating fearlessness of failure. With an untried, untested material (hence the festival title), theater artists felt they faced an inspiring challenge as they handled these works unaided by conventions they’d grown accustomed to in their respective theater companies’ routines and techniques.

At the same time, writers took the opportunity to continue developing their scripts in rehearsal. The process of scriptwork, where the director and the actors offer their help in realizing the playwright’s vision, became the ideal standard and the raison d’etre of the Virgin Labfest.

Which was why, for example, J. Dennis Teodosio’s “Geegee at Waterina” (VLF Year 1 entry) transformed into a riotous and densely layered 40-page script from a flimsy 8-page sketch, after he and director Roobak Valle interviewed the play’s real-life characters, Walter Dempsey and Justo C. Justo, on their friendship, their memories of the war and their present conditions as poor, struggling senior gay people.

The first Labfest ran for less than a week, and was a sensational, inspiring success both for theater artists (actors, directors and playwrights) and the initial audience that hankered for more. Independently, its film analogue, the Cinemalaya Independent Film Festival, was launched less than a month after.

Excitement about doing a second Virgin Labfest grew. The Cultural Center of the Philippines, and eventually the National Commission for Culture and the Arts, expressed financial and material support, making it possible for the VLF to become an annual event.

And a second begat a third, and a fourth, etc. Through these years, we made changes in the selection process (from invitational to an open call for submission of manuscripts), added staged readings of full-length plays and site-specific short performances of fragments of texts (which we had to tame down because we realized performances in restrooms or elevators can be hazardous!). We held book launches, forums and talks, feedback Q&As and a two-week writing fellowship for young playwrights.

By the fifth year, the Labfest had compiled almost a hundred plays in performance, enough to publish its first volume of plays. On the seventh year, the planning committee of the festival, now getting more organized and systematic, thought of opening a slot for a full-length play production. The objective was to goad playwrights who have had three or more entries in previous Labfests to transcend the one-act “barrier” and go for the full-length work.

On the 10th year, however, we decided to go back to the one-act sets after realizing that the rehearsal time needed for a full-length production is so much more than a one-acter. To date, more than 200 plays have been performed (in full production or staged readings) at the festival.

And through the years, the Virgin Labfest has seen several dramaturgs and directors supervising its events: Dennis Marasigan, Jose Estrella and, most recently, Tuxqs Rutaquio, who has been involved in Labfest since year one.

Unlike other festivals, though, the Labfest did not foster a competitive atmosphere. I have consistently declined to institute awards for best productions. The festival is, after all, not about recognizing talent as much as fulfilling aesthetic visions—apart, of course, from the fact that we have never had any budget for trophies and the like.

And I feel it did the Virgin Labfest community a lot more good to encourage deeper interaction and camaraderie. If there is anything one can call a competition, it’s the chance of being included in the Virgin Labfest Revisited set of plays the following year.

In 10 years, the Labfest has indeed become an oasis for new and original works normally disregarded by theater companies, which cannot afford to risk market failure or sheer unconventionality.

To date, the Labfest annually accepts more than 150 script submissions from newbie and well-known playwrights—all vying for a rendering of their virgin plays. Each year, 12 new works get their full production to a growing audience that has helped establish a tradition.

Likewise, the Virgin Labfest has contributed to the building of a canon for Philippine drama, not only through its productions but its publication (two definitive volumes so far) of some of the best and most important one-act plays that ever came out in the past decade.

Ten years may not be that much, if the vision is to establish the playwright as a major wellspring in developing a vibrant local theater tradition despite dwindling or uncertain financial support. But, bare bones and all, Virgin Labfest has made the kind of indelible mark that earnestly appeals to be replicated in other venues, as it consistently and continually seeks out fresh and original works for Philippine theater.

Rody Vera is the founding artistic director of the Virgin Labfest.