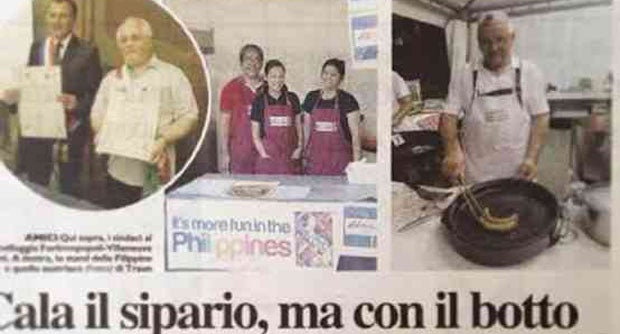 The last week of June saw Philippine cuisine being recognized yet again. The team behind Cibo and Cibo di M, represented by Patricia Locsin, Mariel Bustamante and Anthony Prudencio, served Chicken and Pork Adobo and Sotanghon Guisado to thousands of Italians and foreigners at the recent Artusi Festival in Forlimpopoli, Italy.

Held annually as an homage to Pellegrino Artusi, considered the father of modern Italian cuisine, the festival sets every nook and cranny of the north eastern town in a frenzy as it gets busy with theme tastings, arts and craft exhibitions, and theater performances, for nine days.

Various cities in Italy participate, and a few countries, including Austria, France, Spain and Philippines.

Last year, restaurateur and lifestyle icon Margarita Fores, the founder of Cibo and Grace Park restaurants, received the honorary Marietta Award. She became the  first non-Italian to receive the recognition.

The award recognized Fores’ passion for and contribution to the promotion of Italian cuisine.

This year it was her formidable team that made headlines on the front page of Italy’s newspaper Il Resto del Carlino. The banner lauded the team for serving dishes that were among the most delicious in the fair.

“I chose dishes that had counterparts in the cuisine of Emilia-Romagna,” says Fores in our phone interview. “On the first year we joined, we made Pancit Molo because it’s similar to tortellini. We made the pasta by hand, the way Casa Artusi does it.”

This time, they served Sotanghon Guisado cooked à la minute. At La Cucina Filipina station were a big vat of broth, noodles soaking in water, and other typical pancit ingredients such as shrimp, pork and vegetables. They simply tossed everything in the hot pan whenever someone placed an order.

“We also had adobo because it’s our cornerstone dish. We made sure that we displayed the bottle of coconut vinegar and soy sauce so they knew what was in the dish.”

Just like last year, the team also had Inihaw na Liempo grilled on the spot, upon each order. “It is an open-air fair and people are dragged into the booth by the aroma made by pork kissing the hot grill,” Fores says.

“We used the recipes from the Kulinarya cookbook because it standardizes our cooking. It’s a good representation of the flavors of Philippine cuisine.”

Completing this year’s headline-making menu were Chicken Inasal and Leche Flan, which is similar to the Italians’ crème caramel.

“We’ve got to thank Philippine Airlines, which flew my team to Europe, and San Miguel Beer Corporation, for supporting us,” Fores adds.

We, on the other hand, thank her and her team for reinforcing the position of Philippine cuisine on the global culinary map.