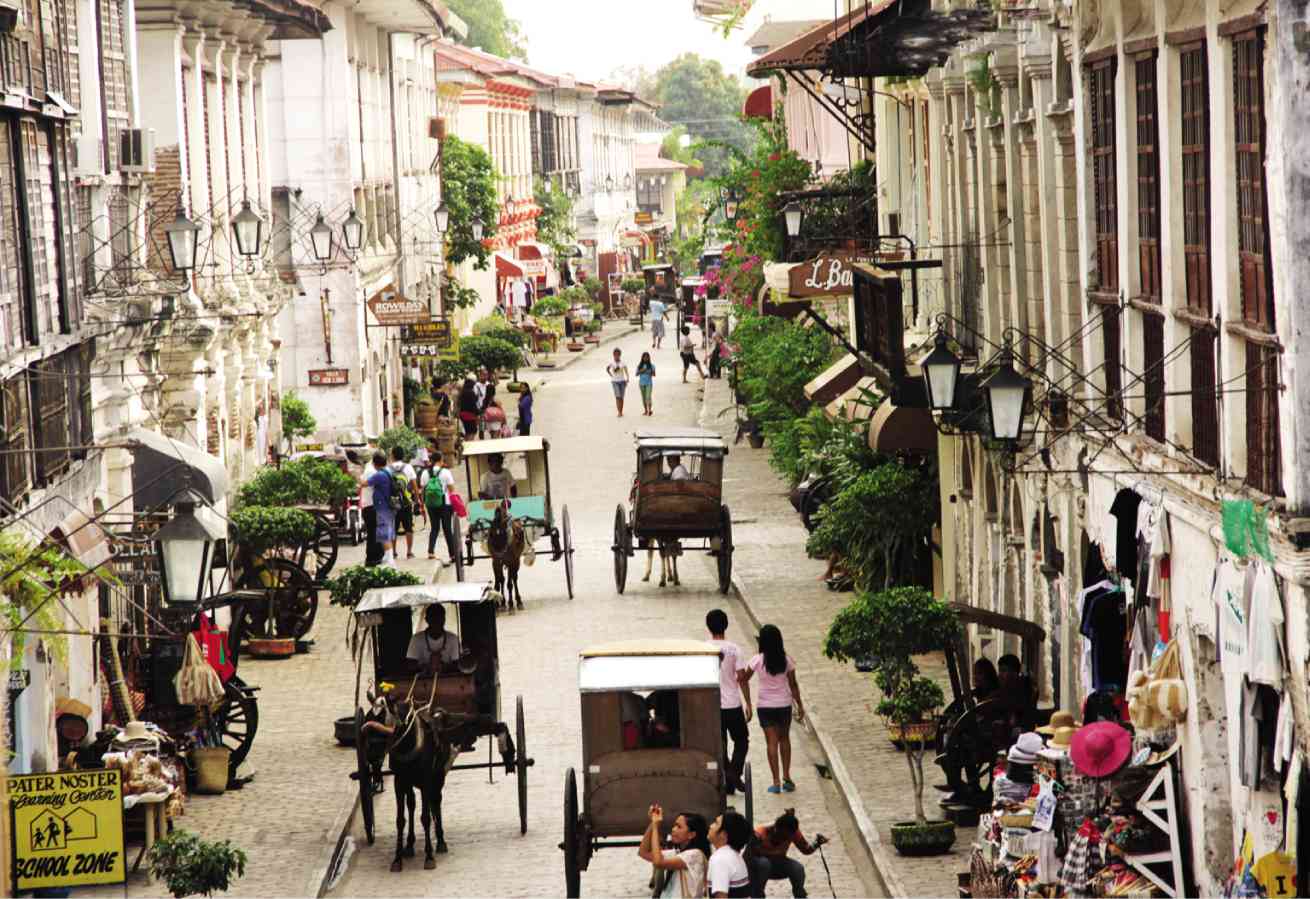 CALLE Crisologo, the nerve center of Vigan’s historic district. Only horse-carriages may traverse the cobblestone street.

Will Vigan make it to Unesco’s New 7 Wonders Cities?

Today the fate of Vigan, capital of Ilocos Sur, will be decided. The list of 28 cities contending for New 7 Wonders Cities will be reduced to 21; then to 14 on Oct. 2; and the top seven cities will be announced Dec. 7.

In 1999, the Historic Town of Vigan was inscribed as a World Heritage Site by the United Nations Educational, Scientific and Cultural Organization.

The inscription reads: “Established in the 16th century, Vigan is the best-preserved example of a planned Spanish colonial town in Asia. Its architecture reflects the coming together of cultural elements from elsewhere in the Philippines, from China and from Europe, resulting in a culture and townscape that have no parallel anywhere in East and Southeast Asia.”

Of the country’s World Heritage Sites, it is the only one that’s a community.

The place, founded by conquistador Juan de Salcedo in 1572, was already elevated to the status of city in the mid-18th century when the seat of the diocese of Nueva Segovia was established here. Named Ciudad Fernandina de Bigan, it declined in the mid-19th century when the Manila-Acapulco galleon trade ended, and reverted into a municipality.

The place was divided between the elite residing in the poblacion and the peasants and artisans inhabiting the eastern bank of Mestizo River. The political turmoil of the 1950s drove many of the elite out of town, and what is referred to as the Mestizo District virtually became a ghost town, the deserted houses caught in a time capsule like prehistoric insects trapped in amber.

These ancestral houses, “tightly strung along narrow streets in a rigid gridiron pattern that radiates from two central plazas,” are an exemplar of Hispanic colonial town planning. Their unique architecture has been attributed to a fusion of native, Chinese, Spanish and Mexican styles especially adapted to a region prone to earthquake and typhoon.

Unesco marvels that the place is “exceptionally intact.” It has provided operational guidelines in protecting the site.

“They monitor if you’ve ever maintained the fabric of what they’re protecting, and do intervention if needed,” says Medina. “We have been inscribed because of two things: protective legislation and community participation.”

The local government has issued specific policies and ordinances to define the boundaries of the protected historic district, specifying the core, the buffer zone, and its outskirts; and to provide general guidelines for the conservation of ancestral houses and historic buildings, while specifying the compatible uses of structures within the protected zone.

The Vigan Conservation Code was enacted prescribing detailed guidelines for restorers and homeowners to follow. New constructions are required to conform to the vernacular architecture and blend with its environs. To construct within the historic district, one has to ask permission from the multisectoral council before getting a building permit.

Two years ago, on the 40th anniversary of the World Heritage Convention, Unesco awarded Vigan the Best Practice in Sustainable Heritage Management, out of 28 entries from 23 countries. It was cited for “good management practice in spite of limited resources, making [its example] adaptable in other countries.” Medina received the award in Kyoto, Japan.

“The reason for citing us,” she says, “is that we’re able to maintain or sustain [heritage preservation] with limited funding. And in all our programs, community participation is imbedded.”

The people’s involvement is especially important, she adds, because more often residents hanker for what they want to see in their neighborhood rather than what’s required.

In building new structures at the city center, there are no real specifications on what’s not allowed—but definitely no gas station, no industrial firms like factories (as those can swiftly reduce to cinders all heritage within spitting distance).

Nothing should be higher than 14.5 meters, the height of the belfry of St. Paul’s Metropolitan Cathedral. And colors are never white, but light green, blue, peach, Mexican colors.

When a fast-food restaurant planned to construct a single-story structure in the place, it was denied a permit.

“Hindi puwede,” says Medina. “Because the only single-story is a camarín [warehouse], and the camarín is outside the city.”

In 2007, with University of Santo Tomas as partner, it conducted a cultural mapping of the city to document its tangible and intangible heritage.

One offshoot of this is the Buridek, the first children’s museum in the North and the third to be established in the country.

Another is a cruise along Mestizo River, with a narration of the river’s relationship with barangay and history, pointing out along the way the villages of traditional industries like jar-making and loom-weaving, and ancient locales such as pagpandayan (for forging of weapons) and pagpartian (for butchering of livestock for the galleon people).

On Calle Crisologo, in the nerve center of the historic district, a four-story ancestral building is being developed for the display and promotion of Vigan products.

Targeted for December is a heritage-conservation complex outside the poblacion. It has two museums, for ancient documents, antique santo and carrozas; an arts-and-crafts center, with training rooms for the construction methodology of the Vigan house and product development of traditional industries like burnay and abel Iloko; a laboratory and depot for conservation materials; and a bed-and-breakfast.

Behind the complex is a three-hectare lot reserved for a rural theme park to showcase Ilocano culture, like Villa Escudero and Nayong Pilipino.

The Vigan masterplan was formulated with the help of the Spanish government. Unesco conducts technical workshops.

Aside from the great enemies of preservation—neglect and the elements—some of these historic structures are also threatened by economic advancement. Most of them are ancestral houses, thus privately owned, so what can conservationists do if their owners decide to demolish these valuable patrimonies to give way to modern developments?

“It is sad,” says Medina. “It is definitely a very difficult situation to be in—choosing between centuries-old heritage and the needs of the present.”

Doesn’t the government, national or local, extend financial support in the preservation of these ancestral houses?

The mayor is quick to reply: “Why spend money for people who can very well afford it?”