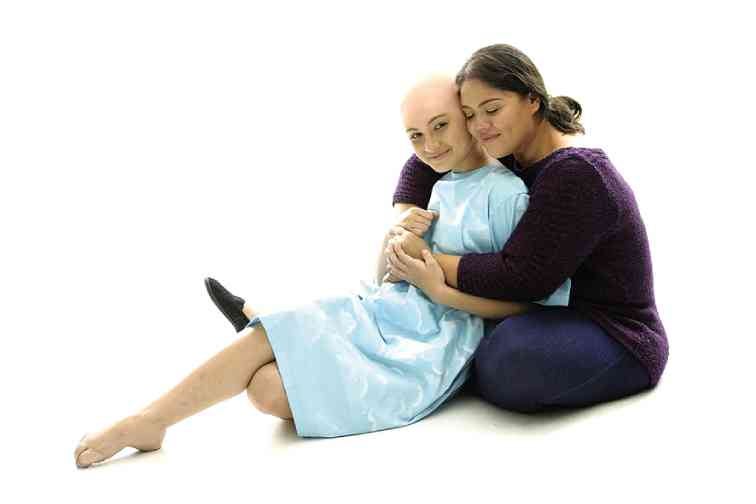 DANI Lyons (played by Rebecca Coates) is embraced by her mother (played by Pamela Imperial at certain performances).

“Why is cancer?”—with a line like this, you know that you’re in for a different kind of show in The Sandbox Collective’s latest offering, “Dani Girl.” How in the world does one create a cancer musical?

The disease is such a heavy topic—especially for patients who go through the pain and treatments, and those who have to endure the suffering of their loved ones.

But after a chat with the show’s director Toff de Venecia, I found my answers. Better yet, I found inspiration in the group of young artists that is bravely bringing our local theater scene to new heights, and in the strength of the amazing people who battle cancer every day.

What to expect from “Dani Girl”:

What made you choose this  project and bring it to Manila?

I have an affinity to loss and insurmountable circumstances, as well as the theater of the absurd, which originated in France after World War II. After the destruction caused by two world wars, artists started questioning their existence. Why rebuild when, in the end, everything would be destroyed? Why live when, in the end, we’re all going to die?

The solution, which the theater of the absurd proposes, is far from suicide or blind faith. Rather, it’s in the acceptance that life is the way it is, but despite that, what can you do to actually live? It’s making the most of the journey rather than the destination.

“Dani Girl” is replete with those themes—life in the face of death, hope amid despair, and the power of a child’s imagination.

Far from sitting back and letting her cancer take over, nine-year-old Danica Lyons goes on a fantastical quest to recover the hair that she had lost to chemo and answer, “Why is cancer?”

What makes the show even more powerful is that it’s told from a child’s point of view, which does away with all the taboos that confound us in society. She tells it as it is, and makes no apologies for it.

It is for this very reason that I decided to bring “Dani Girl” to Manila as the production to launch The Sandbox Collective. It’s a beautiful show with music by Michael Kooman and Christopher Dimond that penetrates your soul.

How does the show balance the gravity of the theme?

“Dani Girl” is definitely not your typical musical, but it’s a story that needs to be told and that people need to watch. It’s theater by new theater-makers for a new theater audience that does not want to be spoon-fed or catered to, but challenged and uplifted.

There are easier ways to choose shows, but in essence, what are we, as artists, adding to the conversation if we simply replicate, or fall back on our age-old devices?

Theater, I believe, is a forum where people should discuss ideas, liberate the conversation outside of the theater’s four walls. “Dani Girl” is one of those shows that will compel audiences to reflect on their existence, about God, family, relationships.

We want to stretch the audience’s imagination. So it’s not staged in a conventional way; there are a lot of absurdist and revolutionary choices we made in telling the story.

But in reimagining this musical for Filipino audiences, we decided there are some things we need to be authentic about because of the sensitivity of the subject matter.

In the past few months, we’ve had conversations with people who have dealt or are dealing with cancer. We had an immersion with the children of Child Haus, a halfway home for indigent children who are in the city to undergo chemotherapy.

We’ve invited cancer survivors and an actual cancer patient to share their story and experiences with the cast.

And basically, extract from our personal understanding, based on movies and literature, bettered by the experience of rehearsing the show every day for the past few months.

What were the biggest challenges in producing “Dani Girl?” And the highs that pulled you through the tough times?

On the production side, there are easier ways to mount a show. Tap a celebrity, or go with a foolproof show that will bring in the peanut gallery on name recall alone.

But I made an informed choice not to go down that path. There are many theater companies out there that are doing this already. Why replicate when you can uplift and transform, or, as a colleague of mine,  JK Anicoche from Sipat Lawin Ensemble, says, transgress?

I am thankful that for every 10 doors that closed on this show, a window opened. For every 10 nonbelievers, there is a believer. They are the ones who get us through. And in those times we felt alone, all it took was a song from the show, or seeing the show at rehearsal in general, for me to believe again.

Just curious, do your lead stars, Rebecca Coates and Luigi Quesada, actually have to shave their hair off?

We’re working with a talented hair and makeup designer, Myrene Santos, for the show. Though the girls playing Dani have expressed their desire to shave their heads, I didn’t want to be fascistic about it.

How do you even begin to convince a society that loves feel-good love stories and comedies to watch a show with such a serious theme? How do you think Manila will receive a show like “Dani Girl,” and what are your hopes for it?

We’ve had test audiences at rehearsals whose reactions have ranged from enlightenment, to catharsis, remembrance, even anger.

The fact that it has inspired discussion and conversation even after the performance means we’ve achieved our goal. I cannot insist enough that the theater is a forum where ideas ought to be discussed. The takeaway for audiences is bound to be different per show. I believe with all my heart that with “Dani Girl,” all it takes is a song.

Can we take children to the show? What is your recommended minimum age for it?

There are some issues tackled in the show that are a bit sensitive—thoughts of death, questioning God’s existence, faith, abandonment, thoughts of suicide, but always with poetry and powerful metaphor since the songs move between Dani’s imagination and the pediatric cancer ward.

According to cancer survivors who have seen the show, these are all very salient and very real thoughts that cross their minds. It is an authenticity that has made the show cross over to the realm of the divine, the kind of holy theater that Peter Brook has advocated, a kind of theater that inspires conversation as opposed to escapism. But with proper parental guidance, it is a show that can be quite illuminating for audiences. I would say PG-13.

Do you think families who have had to cope or are coping with cancer should see the show?

I asked this very question to a mother and son who came to see the rehearsals. The son was battling leukemia. And they said yes, it is a show that they would  urge audiences to watch. For those who have dealt with it, it can be quite cathartic, a form of remembrance because, as with any insurmountable circumstance, it is a mark that you carry the rest of your life.

I lost my sister to a fire that gutted our home almost a decade ago, and that tragedy has become very much a part of me. When I am reminded of my sister, there is a moment of sadness that comes hand-in-hand with joy as a result of the remembrance. It’s weird.

There’s a dandelion motif that recurs in the show, said to be representative of people battling cancer. And there’s a line that goes, “Most people call it a weed. To a flower, it is a thing of incredible danger. But beneath the surface, it contains an intricate beauty. Good and bad, courage and fear, joy and pain. They all are. Trouble is, they sometimes get all mixed up in the same wrapper.” It’s so true.

I have to admit, I’m not the biggest fan of tragedies and dramas. I’ve never appreciated shows that aim to show suffering in all its glory; I get enough of that daily just by reading the news.

However, after absorbing de Venecia comments about “Dani Girl,” I realized that a tragedy doesn’t always have to be tragic. Not every show that touches our soul has to be heartbreaking, and in this case, I believe it will be a heartwarming experience, allowing us a glimpse of what families go through when cancer comes.

May we all be blessed with more understanding that will bring us closer to those who fight cancer, and keep the fire of hope alive within us.

I truly look forward to changing my perspective on life and death as I see it through the hopeful eyes of “Dani Girl” this weekend.