A young virtuoso on the rise | Lifestyle.INQ ❮ ❯ 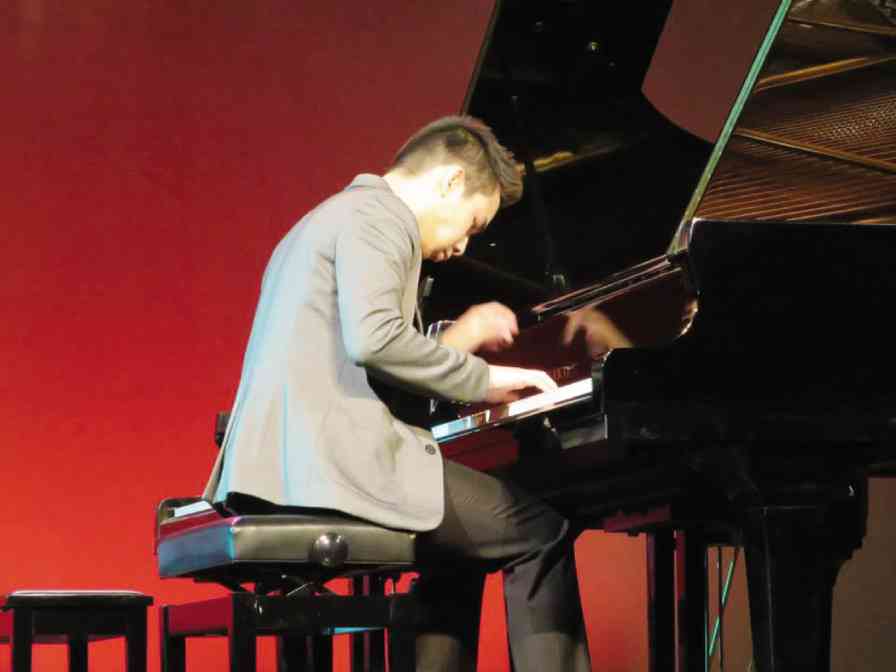 A young virtuoso on the rise

I walked into Lorenzo (Enzo) Medel’s humble home with his concert program stuffed inside my bag. I was going to have it autographed by the winner of several prestigious competitions: the Namcya (National Music Competition for Young Artists), PTGP (Piano Teachers’ Guild of the Philippines) and the UP College of Music and National Steinway Piano Competition.

Enzo’s place was a typical townhouse, blending in with the other townhouses in the area.  But when I entered, a Yamaha piano welcomed me before my “idol” came down the wooden stairs casually dressed in red T-shirt, jeans and slippers.

He warmly shook my hand and thanked me for attending his concert, “A Night of Classical Piano with Lorenzo B. Medel” on May 23.  Held at the Br. Rafael Donato Arts Center in La Salle Greenhills, his concert garnered a standing ovation from the audience (me included) as he continued to amaze all of us with his sheer talent.

I asked how he felt before his performance of four concertos and a few Filipino pieces for 480 people, and he told me about a series of pre-concert rituals: “Usually, my concerts are at night, so in the afternoon, I take a nap to make me relax and have energy. Then, about an hour before the concert, I usually eat. And about 30 minutes before the concert, I pray—which is the last thing I do before I go onstage.”

In his previous performances, he admits to sometimes being hypnotized by his own music.  “It’s just too powerful for me.  Sometimes I am not even myself.  The music just comes out and controls what I do.  There’s a saying that when you’re controlled by the music, it becomes dangerous, but if you’re too much in control, it’s also dangerous,” he says.  However, during his latest concert, he was able to balance both. “That night, I was being controlled by the music but, at the same time, I was aware of it.”

For this incoming sophomore enrolled at the prestigious Eastman School of Music in Rochester, New York, the most difficult thing about studying abroad was that he had to do everything by himself. “I remember, before going back to the Philippines for summer, I had to empty all the stuff in my dorm. It was really difficult because it was my first time doing it.  All that stuff went in boxes and had to be stored in the basement of our dorms.”  Even though he hurt his hands in the process, the experience taught him to become more independent.

One perk, though, was that his school was featured in a Hollywood blockbuster movie.  In the movie “The Amazing Spider-Man 2,” his college appeared in an action scene and, as a bonus, several free premiere tickets being given away. “It was scheduled at 11 p.m., and I had exams the next day, but I still watched,” he says with a laugh.

When asked about his Russian piano professor Natalya Antonova, he describes her as very kind, but at the same time, a very strict perfectionist. “She’s that tough. I am not exaggerating. Most of the time, in a one-hour lesson, she will only focus on one page of sheet music.  You have to really get it, or else, you won’t be able to move forward.”

Before acquiring two scholarships and one grant from the Eastman School of Music, Enzo spent his high school days at La Salle Greenhills. He used to go to school everyday, but all of that changed once he decided to become a career pianist.  “Attending classes and pursuing piano at the same time was tough.  If I forced myself to practice during weekdays, both my piano and academics were affected.”

Fortunately, La Salle offered him a special program that enabled him to pursue piano.  “They home-schooled me.  Same requirements, lessons and exams. I just had to do it all at home.”

In his free time, he used to dabble in magic. The Criss Angel fan admits he couldn’t make things disappear, but could perform card tricks.  Moreover, he loved watching horror movies, playing chess and swimming.

Life as a career pianist

“Before I became a pianist, I thought of classical music as boring,” he admits.  But that was all before he got inspired by a Croatian pianist named Maksim Mrvica, a classical pianist who integrated pop elements in his music.

Enzo was about five when he started pushing notes on his kuya’s keyboard, but after listening to Mrvica’s concert at age eight, he started becoming serious about studying classical music. Two years later, he would be mentored by professor Mauricia Borromeo, a teacher at University of the Philippines-Diliman, College of Music. In a few more years, he  won several awards in various competitions. By the age of 16, he had performed in 12 public solo recitals, with three being full concertos performed alongside the Manila Symphony Orchestra.

“I think it’s my love for music,” he replies when asked why he chose to pursue piano.  “My goal is not to become famous or rich. My goal is to share music, because I really love sharing music with people and making them happy.”

In this musically competitive world, it is easy to compare oneself with other pianists.  But this is not the case for Enzo.  “I don’t really compare myself to other pianists.  I don’t feel that I have to compete with them because that’s not really my mind-set. My mind-set is to get better in music.”

Unlike many Filipino artists who choose to study abroad and stay there, Enzo will come back to the Philippines not just to perform, but also to teach.  “Two of my biggest dreams are to share my talent with Filipinos, and to bring the level of classical music up in the Philippines,” he says.

When asked what his advice would be to aspiring musicians, he answers, “My advice is just to love music.  Never think of competition.  Never compare yourself to others because there will always be a musician who is better than you. If you always compare yourself, you will live a miserable life. Just love music, do your best to get better, play for others and, lastly, share your talents so you can make other people happy.”

That said, I have no doubt this 18-year-old boy will raise the bar for Filipinos in the field of classical music, and continue to give pride to the nation.