Imelda the musical casting in Manila for authenticity | Inquirer Lifestyle 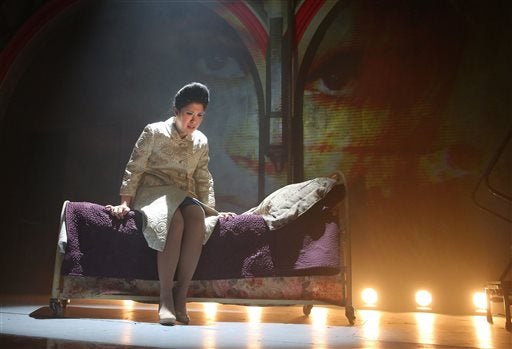 This image released by The O and M Co. shows Ruthie Ann Miles as Imelda Marcos in "Here Lies Love," with concept and lyrics by David Byrne, music by David Byrne and Fatboy Slim, at The Public Theater in New York. Byrne, the Talking Heads frontman went to the Philippines last week to add potential names to the English-based talent pool as he gears up to present the show in London this September. AP

Imelda the musical casting in Manila for authenticity

NEW YORK — David Byrne has gone more than an extra mile to ensure his immersive show “Here Lies Love” about Filipino ex-first lady Imelda Marcos is as authentic as possible as it goes international: He’s just finished casting in Manila.

The Talking Heads frontman went to the Philippines over the July Fourth holiday to add potential names to the Britain-based talent pool as he gears up to open the show in London this September at the Dorfman Theatre.

“We think we might have some important slots filled, but we won’t know which they are until we see the London actors in the next few days,” Byrne wrote Wednesday in an email from the airport in Dubai en route to London.

Byrne’s 90-minute show about Marcos’ rags-to-riches-to-exile journey is also playing at the Public Theater in Manhattan and talks are underway to mount the show in San Francisco, Los Angeles, Seattle and Denver.

Producer Joey Parnes said he and his team are also looking at potential venues in the Australian cities of Sydney and Melbourne and have had interest from Tokyo, Singapore, South America and even Manila.

The project began as a concept album, performed in a handful of live concerts including a 2007 engagement at Carnegie Hall, before it was developed into a full-blown theater piece directed by Alex Timbers with 360-degree staging. Byrne wants to hire as many Filipinos as possible to star in “an episode from their own history.”

The energetic, catchy musical begins with Imelda as a poor girl who gains fame as a beauty pageant winner. Following a whirlwind courtship, she marries up-and-coming politician and soon to be president, Ferdinand Marcos. The lyrics are mostly taken from speeches or interviews from all sides during Marcos’ era and the standing-only audience moves around the space with the 15 actors.

The Marcoses ruled the Philippines from 1965 to 1986 — the last 14 years of that under martial law — before being driven into exile in Hawaii during a 1986 popular revolt, leaving the country’s economy faltering under huge debts. Ferdinand Marcos died in 1989 and Imelda has since returned to her homeland and entered politics.

Byrne, who teamed up with Fatboy Slim on the disco-influenced music, waved away any notion that 85-year-old Imelda Marcos was being wooed to play herself in the London production. He said he hadn’t met her and “we are not interested in involving her in our show.”

He did reveal that one night in Manila he visited some friends — writers, filmmakers, artists and poets — at a bohemian residence he likened to the Chelsea Hotel in Manhattan. “One of Imelda’s nieces was there — amongst the bohemians, which tells you how much Philippine culture differs from our own,” he wrote.