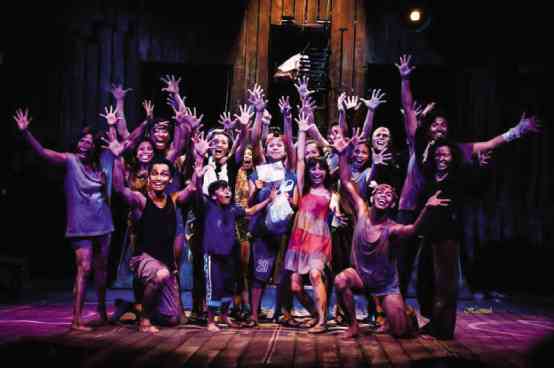 Tanghalang Pilipino’s “Kleptomaniacs,” written by Layeta Bucoy and directed by Tuxqs Rutaquio, is a brilliant experiment, a socially aware original Filipino rap musical. I wish it had worked out better. I was not happy with this play, for reasons that have nothing to do with its novel format and everything to do with storytelling.

The acting is flawless, as I have come to expect from Tanghalang Pilipino. Production design and production values are similarly stellar. I was particularly happy with the stage.

Sound is a problem. When you start a play with a strident fliptop rap, it simply does not do to have the band drown out the rapper. Some of the actors’ mikes are also quite scratchy. The costumes are generally convincing, though perhaps a little too clean for slum dwellers and earthquake victims.

My main problem with this play is with the writing. As a college teacher who specializes in fiction, I can tell you that “Kleptomaniacs” has several glaring formalistic errors.

First of all, it is preachy. I hate that. The goal of a play is to convey an emotion through story; message, while important, is tangential to that. It does not do to approach your message too directly, unless you’re doing epic theater a la Bertolt Brecht. (Indeed, at its best moments, this play reminds me of “The Threepenny Opera.”)

The impetus for this play came from TP artistic director Nanding Josef’s desire to prick the consciences of our elected officials. That’s not a bad thing, but neither is it an excuse to commit the ancient mistake of telling rather than showing. It was fun to see the characters rapping cleverly at each other, but this is a play, not a rap battle. It’s not enough to simply have people in costume debating each other onstage, even if the debate takes place in brilliant fliptop rap.

As a result, the characters are shallow. Politically motivated plays are vulnerable to this; it’s tempting to turn a character into a mouthpiece. The characterization is therefore riddled with gaps.

Where did Tabo’s admirable idealism come from? What awful thing happened to Vicky to turn her into such a cynical shrew? Most importantly, what is the basis for the friendship between Ngongo and Tabo, a relationship that should have been the centerpiece of the play?

It’s nice that Ngongo loudly proclaims his faith in the main character, but where did that come from? The relationship should have been more developed, but it feels like Ngongo is shoved to the sidelines.

People in the audience giggle during his big dramatic death scene. It isn’t convincing. The play never really gains emotional potency until the scene where Tabo’s parents reject him and spit on him.

That brings us to the final problem. “Kleptomaniacs,” such a message-oriented play, delivers a message directly counter to what it hopes to espouse. The emotional message is the exact opposite of the political one—and it is emotion, not politics, that moves audiences.

In “Kleptomaniacs,” every single character is either a victim or a villain, and the vast majority are the latter. The love story between Vicky and Tabo, the single most perfectly executed relationship in the play, is also the most cynical; its whole purpose is to demonstrate that true love is no substitute for good sense.

Tabo’s parents lose our sympathy the moment they hit him and spit on him for not stealing on their behalf, and brilliantly demonstrate that: a) parental love is weaker than greed and despair; and b) there are certain acts of cruelty that a relationship cannot bounce back from even if you later have a complete change of heart.

The other characters are similarly ugly at heart, except of course for the ones who die. The poor people of Tabo’s village complain loudly that the government is not helping them. Yes, they are citizens and are entitled to help, but that’s a two-way street.

None of the characters show the slightest hint of citizenship. They demand help from society when they themselves  have contributed nothing to society. The characters are creatively sterile. They cannot generate love or hope or anything except children they can’t afford and don’t know how to raise.

How on earth are we in the audience supposed to feel sympathy for that—for a people whose main job, it seems, is to betray and kill each other? The corrupt politician, who should have been the source of evil in the play, is reduced to an afterthought.

You see the problem here? The intended message of the play is that the helpless cannot rise up without help from our institutions. The message that it delivers is that people in difficult situations inevitably devour each other and are therefore not worth helping—that we are all kleptomaniacs, deep down. This play is supposed to condemn greed, not human nature.

I want this play to succeed. It has a great premise and impressive presentation. Now I worry that its thematic failings will turn future playwrights off from producing rap musicals.

The failings of “Kleptomaniacs” have nothing to do with rap, and the brilliant actors and crew of Tanghalang Pilipino deserve better than to be turned into mouthpieces for muddled political messages. We have our elected officials for that.