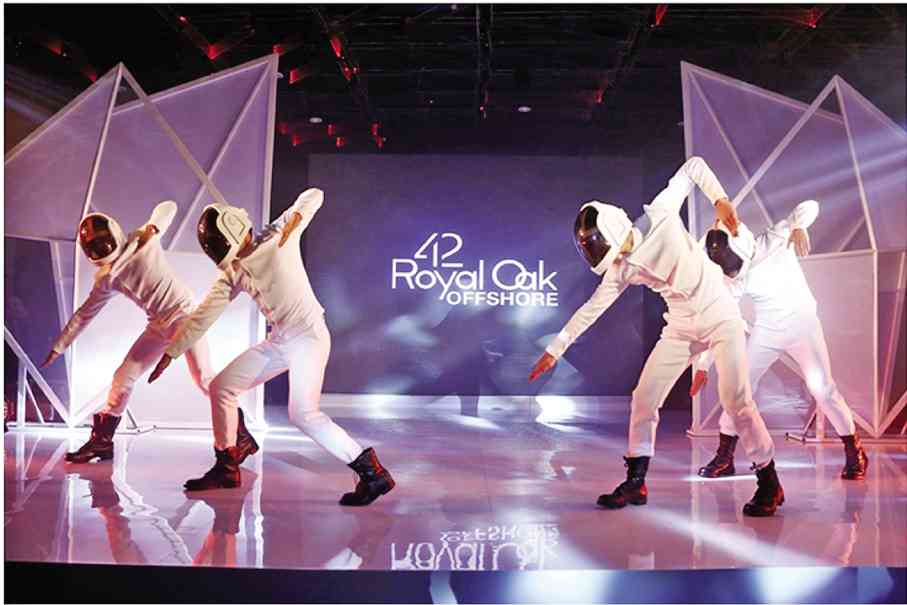 THE 2014 Royal OakOffshore is presented to Audemars Piguet watch-lovers at Hyve Bar.

Charmant Oliviero Bottinelli, managing director of Asia-Pacific for Audemars Piguet, said Manila was a fitting final destination of the month-long launch of the 2014 collection.

Prominent names from big business and high society flocked to Hyve Bar for the presentation of the epic timepieces.

“Just as the Royal Oak collection embodies innovation and a distinct sense of a revolution with the famous motto, ‘To break the rules, you must first master them,’ it highlights Audemars Piguet’s ongoing commitment to technical progress and the family-owned company’s spirit of independence,” said Emerson Yao, managing director of Lucerne, Piguet’s Manila distributor.

His brother, Lucerne president Ivan Yao, said: “The launch brought to the Philippines a peek into 140 years of horological mastery of Audemars Piguet.”

The Swiss brand has declared 2014 the year of the Royal Oak Offshore. “It is a watch that is still as innovative, forward-thinking and rebellious as when it burst onto the traditionally conservative luxury-watch scene in 1993,” Ivan Yao added.

The 2014 Royal Oak is the only brand that can claim to be both a specialist and generalist. As one witty pal of mine said, “It’s such an incredible watch, I still have it, and believe me, it even outlasted my marriage!”

Guests had a cool time at the recent “Piquadro Private Party.”

Piquadro is an Italian luxury brand known for its leather business bags and travel accessories. For the party, its Manila distributor, Brad Gateway Inc. led by CEO Gabriele Boschi, dressed up the Kirov model unit at the Proscenium Showroom in Rockwell, in partnership with Rockwell Land.

DJ Jessica Milner played her thumping house beats through each of the six rooms of the Kirov model, making the viewing of the new Piquadro collection a multi-sensory treat for the invitees, who nibbled on canapés catered by Chef Jessie and sipped the special one-off cocktails concocted by Edsa Beverage.

On display in both the impressive grand master’s bedroom and lavish living room was the Blue Square collection, the trademark line of Piquadro.

In the queen’s room were the Caterina and Deneb lines.

Up for grabs were three gorgeous bags: the Computer messenger from Signo Collection; the women’s computer bag from Caterina; and Computer Portfolio from Altair.

Those who qualified for the raffle posted pictures of their favorite Piquadro pieces online with the hashtag #PiquadroPH.

Being such an ice cream freak, I jumped with joy when Baskin-Robbins finally opened its first store in the Philippines at Central Square in Bonifacio Global City, Taguig.

The brand’s exclusive licensee in the Philippines is IceDream Inc.

Issa Litton hosted the launch for some 200 guests who admired the store’s cool and trendy design. They all dug into Baskin-Robbins’ famous 31 flavors, not to mention its awesome range of custom ice cream cakes, frozen treats, beverages and ice cream sundaes.

“It took us years looking for a partner that has the capability, vision, passion, drive, and who strongly believes in the brand,” said John Varghese, vice president of Dunkin’ Brands, franchisor of Baskin-Robbins. “We are privileged and honored to bring Baskin-Robbins to the Philippines and to partner with IceDream, Inc.”

Aside from Varghese, other Baskin-Robbins international executives present at the launch were Marc DaSilva and Vico Lamar.

The star of the night was Charmaine Villaruel, a devout Baskin-Robbins fan who was said to have pushed to bring the brand to the Philippines.

As a reward, she was given a free supply of Baskin-Robbins ice cream for the rest of the year.

Highlighting the induction is “Back To Broadway,” a concert revue of some of the world’s best-loved musicals.

Proceeds from the concert will support Inner Wheel projects including a female pavilion at National Center for Mental Health, as well as scholarship and feeding programs.