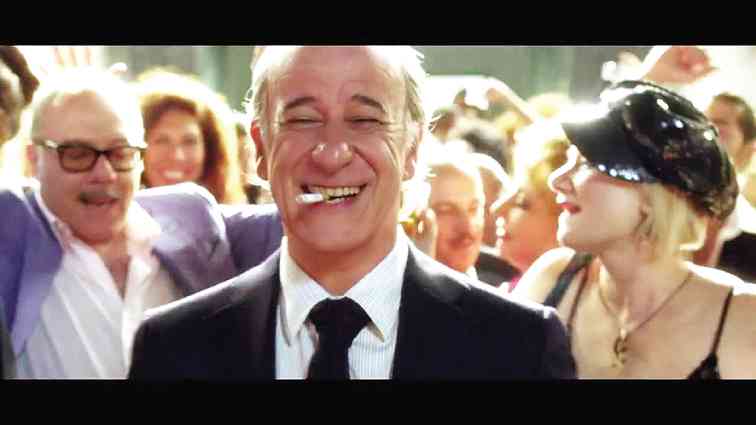 The luxe Roman life, according to Italian filmmaker Paolo Sorrentino’s recent Oscar-winning film “The Great Beauty” (“La Grande Bellezza”), is marked by hedonism, absurd excess and vanity, and obsession with keeping up appearances.

Despite being caught in all that decadence, 65-year-old writer Jep Gambardella (portrayed with exquisite charm, wit and suavity by Toni Servillo) takes viewers in an introspective journey as he goes about partying, hobnobbing with his socialite friends, and strolling around Rome.

The film gives a fantastic tour of the Eternal City with candlelit visits inside palazzos that shelter many treasures, and sweeping views of a landscape laden with ancient, iconic structures. We see their decrepitude, too—and among the city’s wealthy, overindulged inhabitants.

“The Great Beauty” is among the films in Moviemov 4: Italian Cinema Now, the Italian film festival to be held July 23-27 at Shangri-La Plaza in Mandaluyong City.

“Italian comedy is not only something fun or comical; it’s more of the bittersweet kind,” explains Tagliaferri at the recent press conference and film screening.

“Through laughter and cheerful sketches, [Italian movies can] still liberate the main feelings of the heart such as hate, love, passion, sorrow, and [render stories about] family and death.”

The contemporary lineup presents a thematic variety, including relationships and romance in Ferzan Ozpetek’s “Fasten Your Seatbelts” (“Allacciate  le Cincture,” 2013).

Middle-class economics and the pursuit of employment are depicted in Sydney Sibilia’s first full-length feature “I Can Quit Whenever I Want” (“Smetto Quando Voglio”), as well as in “Benur—Un Gladiatore in Affitto,” director Massimo Andrei’s 2013 film adaptation of screenwriter Giovanni Clementi’s stage play.

Moviemov 4 dedicates a retrospective to Ettore Scola, one of the masters of Italian cinema.

To be screened are three of his recently restored work: the 1977 César Awards Best Foreign Film, “We All Loved Each Other So Much” (“C’eravamo Tanto Amati”); “The Pizza Triangle” (“Dramma Della Gelosia,” 1970), which won a Cannes Best Actor award for Marcello Mastroianni, poster boy for European good looks and acting chops in the ’60s; and 1998’s “The Dinner” (“La Cena”).

Also on the film-fest lineup is young actor Andrea Bosca’s directorial debut, “A Tutto Tondo,” about the friendship that develops between a young lawyer and a Filipino family living in Rome. The short film, which shows the festive and colorful world of Filipinos in the Italian capital, is Bosca’s fundraising project for the kids of Smokey Mountain in Tondo, Manila, which he visited last year.