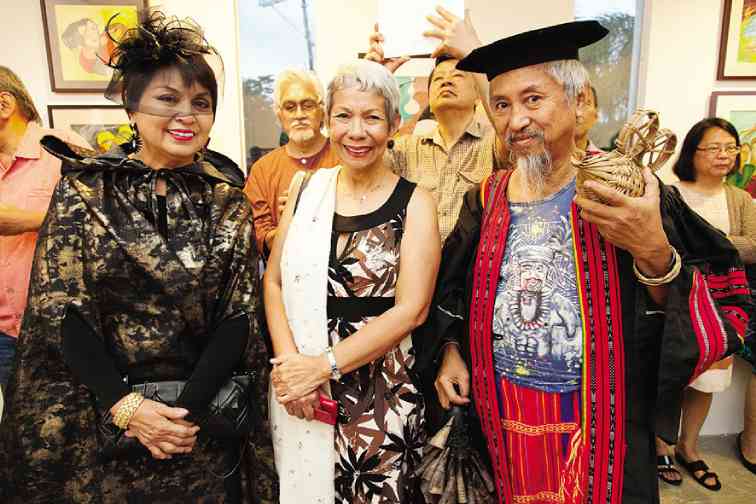 “Unless someone like you cares a whole awful lot, nothing is going to get better. It’s not.” – Dr. Seuss, The Lorax

At the end of the woman’s column during the lead-up to the vernissage of her solo exhibition “Same Difference: Ganon pa din ang diperensya,” she often placed a reminder to come in something you wouldn’t dare wear elsewhere. It truly sounded like an invitation to a costume party.

For some of her diehard fans and loyalists, it presented a conundrum. One couldn’t come as a Western literary figure like Virginia Woolf who must’ve been at her writing peak in 1930 when Gilda Cordero Fernando (GCF) was born. No matter how one wanted to channel Nicole Kidman in “The Hours,” one would be going against the serio-comic sensibility that marked Gilda’s prose.

One’s escort couldn’t come as Mark Twain, either. Too American, although he could pass for the satirist if he left his moustache untrimmed all the way to July 10.

The challenge was how to put a so-Pinoy element. That was the crux of the quandary. If one had been paying close attention to what she had been writing since the ‘70s or earlier, the pride in being Filipino shouldn’t be far behind.

What to wear became Rolly Fernandez’s mini-problem; he threatened he wouldn’t budge from his home-office-home routine in Baguio if he were made to look ridiculous in another part of the country. He remains protective of his respectability (sabay ilag ng wife). He didn’t want to look too far-out, no matter that GCF was behind that long-running magazine series called “The Far-out Catalogue.” Nor was he going to allow the idea of “wild” to even touch his dress code for the evening.

His wife of 30 years suggested: “Why not wear your usual polo shirt or collared T-shirt, then top it with an Amerikano? The Silverlens airconditioning is quite chilly. Instead of wearing pants, wear shorts. Come as Bentot in ‘Tang Tarang Tang.’ Put on your Yankee baseball cap, ayos!”

His eyes twinkled as though he were acknowledging ’twas a capital idea. He promptly returned to the copy he was editing. He figured he’d only pack the shorts on his trip down from Baguio, then get out of his slacks in the toilet and climb into ’em shorts before the guests streamed in. But then he heard that Vergel Santos and his wife Chit Roces also balked at the idea of wearing anything out of character.

And so the evening went with Mr. Fernandez and Mr. Santos comfortable as themselves. The former’s concession to his missus was wearing an orange FedEx button that said “DON’T PANIC.”

The girls, the gays and the real artists could always be counted on to let their hair down (or up). Chit said, when she opened her arms to show off her all-white pantsuit, then pointing a finger to her dark glasses: “I’m a masahista. Bulag pa!” She arrived with her almost next-door neighbour in Makati, Rita Ledesma, who was in a flowing Natori, an outfit one doesn’t see her normally wearing even at home.

Plet Bolipata said she was going to come in her two-piece swimsuit but thought it too daring.

The Lola Basyang squadron (Mariel Francisco, Ging Naguiat and Rose Scott), all stalwarts of the ahead-of-its-time Center for Healing and Creative Arts where Gilda used to conduct workshops for goldies (golden oldies) to prepare them for the inevitable, came in. Their walking canes and sticks were simply props.

A round of applause greeted the artist, she who had described her 40-plus paintings in her Sunday column as “hindi naman lahat baliw,” as she walked in with her caregivers Aiko and Veni following. If she was holding on to a cane, it was for a very real condition: rheumatoid arthritis. Even from a distance, one could hear her chuckling and chortling as she astounded guests with her outfit, particularly the pink furry pants designed and sewn for her by young buddy Willar Mateo.

When I first beheld the pants weeks earlier, I had said, “They remind me of the Lorax.”

When I left her house, she texted to say, “Do not compare my feather pants to Lorax or any book creature. I don’t remember any Seuss character. This was pure invention. You diminish it by comparing it with something existing. Like if you say I paint like Grandma Moses or Pollock, etc. Okay na lang na kami weird but orig.”

I couldn’t keep myself from texting back, “I never said you painted like Grandma Moses or Pollock.” Although I once overheard National Artist F. Sionil Jose, who was present at GCF’s opening with his devoted Tessie, say that he found her paintings as charming as Grandma Moses’ but that GCF’s  had “more sophistication.”

Of course, she’ll want to have the last word: “You didn’t get me. Ok na rin.”

It’s just as well that at her costume party, the program was brief so the partying could last until the artist was fit to be carried on a hammock down to her car from the exhaustion of the preparations and the evening.

A group of Bible students called Church Café, led by its deaconess (or babaylan) Julie Lluch, jammed with filmmaker Kidlat Tahimik as they chanted, in English, in Filipino and in Taglish—with gongs and drums being pounded on the side—a short verse (a doxology, or have people forgotten what that is in a secularized world?) It was their way of blessing the artist and the people who came for her.

Jacqui Magno, who just had her birthday concert “Moonlight and Love Songs” yesterday at Palacio de Maynila (although her real birthday falls on July 29), sang “Hindi Kita Malimot,” a danza by Josefino Cenizal from the American period (the time of GCF’s childhood).

Nothing less than another happening for GCF is in the works for the last day of her exhibit, Aug. 9, at Silverlens Galleries on Pasong Tamo extension, Makati. From 2 to 5 p.m., at least a dozen of her friends and detractors are going to take turns “roasting” her alive in an art event billed as “Been There, Bundat: A Lively Roast of Gilda Cordero Fernando, D’Apol of All Eyes.”