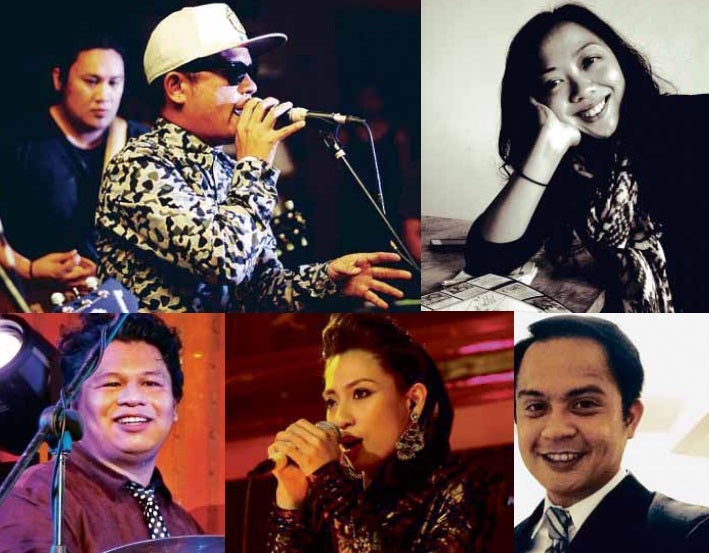 How rock musicians can afford the rock ‘n’ roll lifestyle

Real musicians are savvier. They don’t rebel just because. Instead, they ably apply the same genius that they strut onstage to their day jobs.

Here’s how some of these multitalented performers afford their stage presence: by composing jingles, selling real estate, handling luxury events and hawking ads.

Jazz Nicolas, 35, sings and plays drums for rock band Itchyworms. She also sings and plays bass for his other band Boldstar, and is a composer at Watusi Manila, where he creates ads, jingles and TV/movie scores.

His bands play at The ’70s Bistro, Route 196, Saguijo, as well as in events and parties.

He took up Economics, then shifted to Social Sciences at the Ateneo.

“Obviously, I didn’t know what to do with my life,” he said. “Then, I studied music composition at UP Diliman.”

Nicolas’ father was a businessman, recording engineer and musician, and his mother was a nurse.

“My dad is a big influence in my life,” he said. “I grew up seeing him have a business job during the day, play guitar at home and play gigs at night. Through him I learned that it was possible to pursue your passion and have a day job at the same time.

“When I was young, I would hang around at my dad’s band rehearsals. We listened to a lot of music at home and in the car. My first instrument was the piano, so I always tried to play whatever song I liked on it. I had some lessons but never got into the habit of reading notes. I mostly played by ear, or would have someone who knew a particular piece teach me.”

By day, Rob Martinez, 36, is a sales director for a residential property firm. By night, he morphs into “Robbie Ranks,” frontman for urban reggae group Milagros Dancehall Collective that performs Sundays at B-Side, The Collective (Malugay Street, Makati).

The Communications Technology Management graduate from Ateneo was the original bassist of Brownman Revival from the time the band formed in college until it signed up with a major label.

His father was an electrical engineering contractor, while his mother was a legal secretary.

She usually performs with DJs at clubs like Republiq, and for events like Discovery Shores’ New Year’s Eve Party.

Her parents are both entrepreneurs. “It was in the ’80s when my lolo bought us a karaoke machine. I sang a Madonna song and my entire family was in shock, but I wasn’t. I always thought that everyone can sing! Apparently not!”

Isa Garcia Sicam, 34, plays bass for electro-dance indie rock band Taken by Cars. “We don’t have a regular set,” she said, “but we gig about once a week. We used to do a lot of gigs in bars like Saguijo and B-side but nowadays we play for music festivals and events.”

She is also the managing director for OgilvyOne, the digital and CRM division of the creative agency.

“We work with companies and brands to come up with their digital marketing campaigns and CRM programs,” said Sicam.

She earned a Management degree from Ateneo and a graduate degree in Marketing from London Metropolitan University.

“It was my mom that encouraged me at a young age to start with music,” she said. “At 6, I learned how to play the violin, then the piano and the trumpet. In high school, I picked up guitar, although not very well,” said Sicam. 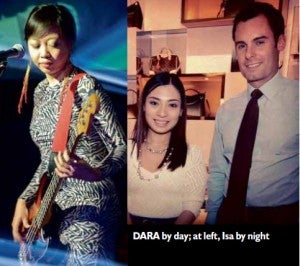 Because of her comfort with four-stringed instruments, at 15, Sicam shifted to the bass.

“My dad was in investment banking and my mom was a housewife while we were growing up in Vancouver, Canada,” she said. “My mom started a little artificial flower business which flourished.”

The Garcias moved back to Manila to start Designer Blooms.

“We spent a lot of time helping my mom out. After college, I worked with the family business for a few years. I guess we were cheap labor,” she laughed.

“But looking back, it taught me about the value of hard work and entrepreneurship, which gave me a good foundation for business. Although my day job seems very far from my flower orientation, both need creativity and strong business and marketing inclinations to succeed.”

Nicolas recalled how he landed his day job:

“When I was in college, I got to visit Louie Ocampo’s studio through our alternative class program. I learned that he not only wrote songs for artists, but he also composed jingles. He even wrote a song on the spot. That really inspired me. After that, I wanted to work in a studio as a composer like him someday.”

Martinez’s job right after graduation was real estate sales. “I’ve stayed in this industry ever since, having moved companies only once,” he said.

Roa’s first job out of college was at a company that developed websites.

“I discovered that even if you took up Marketing but don’t have any interest or understanding of the product, you will not be effective,” she said.

The company downsized and Roa was retrenched. So she focused on what she loved: singing and fashion. She sang on the side, and left for Paris to study fashion.

Returning to Manila, Roa became marketing manager of Freeway/Ensembles. Then she tried fashion styling. “It was something I loved to do and can do really well,” she said. “But I didn’t enjoy the part where I had to borrow the clothes, carry them everywhere (they were quite heavy), and lose items that I had to pay for. So I moved on to helping out in my dad’s company, which also allowed me to give theater a shot.”

She auditioned and successfully got in each time.

“This period was one of the most exciting times of my life. I joined Teatro Gantimpala and Trumpets Theater,” she said. “The rush, pushing limits in daily rehearsals filled with dance and song; the unbelievable feeling you get when you step on stage and the lights are almost blinding you, the sense of family and love that you get from the cast… it was a fairy tale life. But I was a single mom and had to return to finding a career that will support the both of us. I was extremely sad that it had to end.”

Zara was expanding in Manila and needed retail managers. Roa became one of them.

“Zara was two years of mostly living in Hong Kong and China,” she said. “Never had I experienced working so hard! It was hard, physical work! I felt so tired, but I loved it! I loved getting things done ‘fast,’ taking pride in results, managing teams and showing strength even in times of complete exhaustion. I was training new teams through sign language and invented hand movements. On my last day in China, I got a call from a head hunter; they were calling for Louis Vuitton (LV).”

For almost six years, Roa was part of Louis Vuitton Philippines. “Here is where I grew. I discovered that I could do things I never imagined. I was lucky to experience the power of this brand, which influenced me to think that a person’s talents are limitless. We have the capacity to grow into becoming highly skilled in varied expertise.”

Roa left LV at a time when she felt the country’s ideas and businesses were booming. “Great concepts are put into reality in various businesses, but lacking the capacity to push forward or even sustain a global standard,” she explained. “I want to be instrumental in providing assistance to local entrepreneurs with a goal of attaining a Global Filipino image in a worldwide setting.”

This led to Collab Contessa, the latest hat she wears.

In college, Sicam took up advertising as an elective. “My professor referred me to Ogilvy and suggested I join their management trainee program,” she said. Sicam got the job. “But over the summer, I decided to work in our family business instead.” This lasted for a few years before Sicam took her Master’s degree. When she returned from London, Sicam applied again to Ogilvy. “Ten years later, I’m still here.”

While Nicolas is already a full-time musician, Martinez plans to keep his musical alter ego a side project/artistic outlet.

Roa said singing cannot be a main source of income for her. “It will just continue to be a side project,” she said. Sicam felt the same: “For now, I like keeping it as a serious hobby.”

“I never knew that I’d be a full-time musician,” said Jazz. “When I grew up, I wanted to have another job that wasn’t music-related, so I would have sort of a fall back.”

For Roa, it was always a “journey of discovering interests, skills and talents.”

Sicam added, “I did know that I needed to have music and business somehow in my life.”

Music and the day-to-day grind peacefully coexist in these artists’ lives.

For Martinez, “Being involved in music helps me with work as a stress reliever. It is also a way of maintaining ties with college bandmates who’ve become lifelong friends.”

“My motivation to keep on doing music is for me not to lose touch with my artistic/bohemian side,” he explained. “Being in a corporate day job tends to suck the life out of you if there is no respite. Music provides me that much-needed break from the rat race.”

“Music makes me remember that I need to express my creativity and talent in whatever I choose to do,” Roa said. “If I don’t, I become miserable; I feel stressed and trapped… Meanwhile, my day job influences my music when I apply my dedication and persistence in delivering quality results. I practice my songs until I can confidently sing them perfectly.”

“A career in advertising is quite intense,” revealed Sicam. “So having music to break that always helps me maintain the balance. Music helps give me free expression. It keeps me creatively sharp. This is something that helps me with my job.”