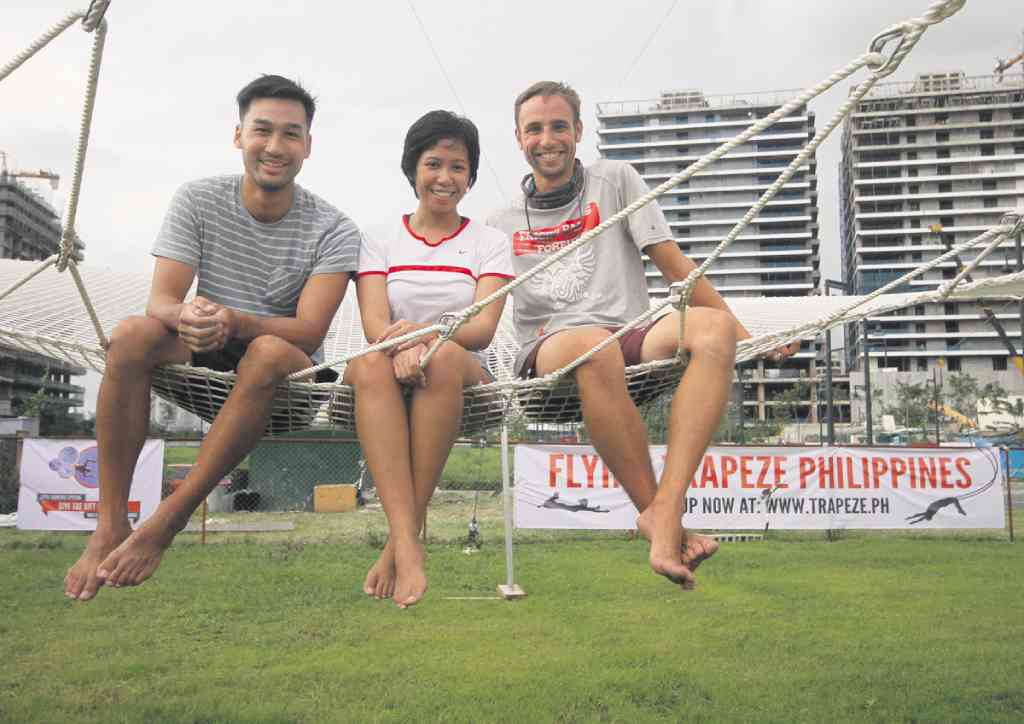 I felt a rush of panic while standing on top of the 25-ft-high platform, bracing myself for my first-ever trapeze swing. Deep inside I was screaming while staring on the ground and the net that would catch me below. But somehow I managed to keep my composure as I finally took hold of the bar, bent my knees and hopped off.

My squeal came during mid-swing, as flying trapeze instructor Dan Rozensweig asked: “Want to try to lift your knees?”

“No!” I hollered, panicking but at the same time enjoying the thrill of the swing. “Okay, you can just swing for now,” Dan said.

As my swing lost its momentum, I had to do yet another death-defying act: Let go of the bar and allow myself to fall to the net. Thankfully it was a slow drop because of the safety cables attached to the belt I was wearing.

I wasn’t trying out for the circus, just sampling Flying Trapeze Philippines, the newest fitness attraction in town and the first trapeze school in the country. It was brought here by Dan and Will Hsu, both experienced “fliers” and trapeze enthusiasts.

“We’ve been seeing the opening of antigravity yoga studios, and we know of Polecats Manila, which also does a lot of indoor trapeze; so I thought that now is a great time to introduce the trapeze to Manila,” Will said.

The school recently opened in Bonifacio Global City. The trapeze rig is an impressive sight, standing on an open field at the corner of 34th Street and 9th Avenue.

Classes will be held in groups of 10. Will starts the lesson by teaching the proper positions when preparing for a swing. As you hold on to a pole on your left, you must lean forward, your back straight. You must then stretch out one hand and grab on to the swinging bar. When you’re ready, you can let go of the pole you’re holding on to the left, so that both hands are now gripping the bar. Stand with your feet shoulder-width apart, your toes a little over the edge of the platform.

When Will or Dan gives the command “Ready,” bend your knees. And when they say, “Hop,” you must jump, bringing your feet together as you hop off the platform.

“Pretend like you’re jumping into a small hole in front of you, so you have to bring your knees and feet together,” says Will.

Will then demonstrates a basic trick—which I, sadly, haven’t accomplished (yet!)—called the knee lift: As you’re swinging in the air, you must bring up your knees to your chest and hang them over the bar. Once you’ve hooked the bar under your knees, you take your hands off the bar and let yourself hang upside down by your knees. After that, you will do a curl-up so you can grab the bar again with your hands, unhook your knees from the bar, and hang right-side up again.

“When you’re bringing your knees up, do it like you’re almost rolling on your back, so it’ll be easier,” said Dan.

I was almost able to do it, but I couldn’t pull my knees up enough to hook them on the bar. Dan and Will were great teachers though, cheering me on and pointing out small things I was able to do right: My toes were pointed, giving me good form; and, as Dan put it, I had mastered the dismount from the net (admittedly my favorite part—you grab on to rope handles attached to the net and roll over, so that you land on the mat below on your feet).

For young and old

“We want to build a program [for the students]; we don’t want it to be just a one-time thing,” says Will. “The great thing about the trapeze is there are so many tricks you can learn. You just have to start with the basic, then build up from there. You can even put a new twist to different tricks.”

Will and Dan are accepting students as young as 6 and even as old as 65. “But there are  some fliers who are even older,” said Will.

Will has been flying in the United States since he was 8 years old. He started teaching how to fly on the trapeze when he was around 16. He would join “circus camps” where he trained and improved his skill. “I met Dan when we both worked at the same summer camp,” said Will. He has also trained with other trapeze artists in the US. 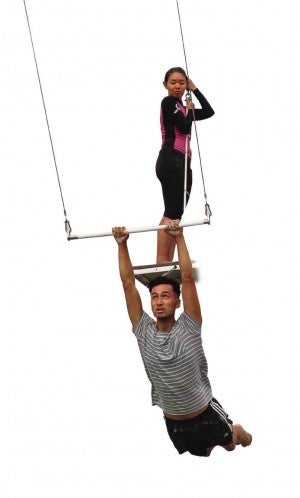 Dan, on the other hand, has been flying the trapeze for 10 years. He has been active in circus arts for over a decade. He is a Swedish and American citizen who’s now based in Manila, and is excited to share the art of flying trapeze to Pinoys.

Will wanted to put up a trapeze rig in the country when he first moved here from the US eight years ago. But he felt that it wasn’t the right time. Now that more people are looking for new forms of exercise, Will said that Pinoys will soon be flying in no time.

“The trapeze has always been big in the States. Britney Spears and Hugh Jackman use it as a fitness regimen to complement their usual workout,” Will said. “I don’t know anyone who really ‘hates’ it—you’re either nonchalant about it, or you absolutely love it.”