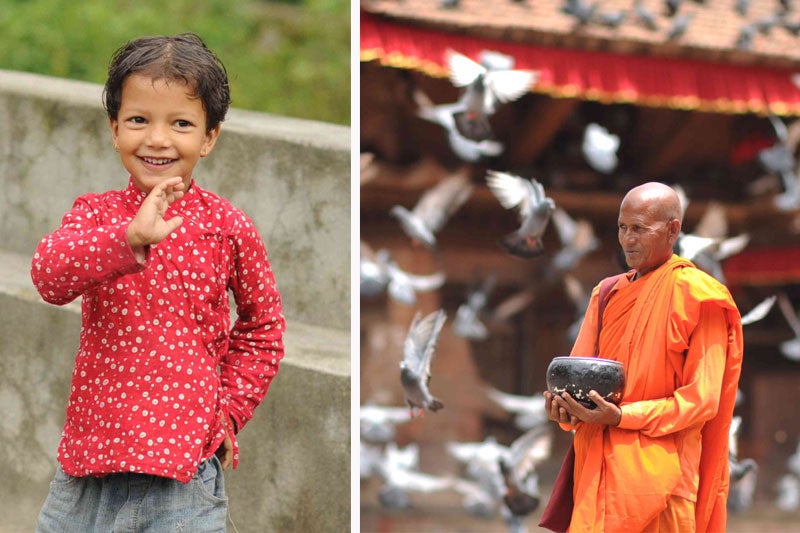 HUMAN CONNECTION: A child smiles amidst the squalor and a monk with begging bowl.

For my birthday, I wanted to try something different. And Nepal looked different.

Most of us in the tour group went to Nepal with a goal in mind—to see Mt. Everest. But the trip gave us much more than just the highest peak on earth.

When we arrived, we had planned to go to Nagarkot to be able to see Mt. Everest the next day at sunrise. It would take some three hours of travel up the mountain. But it was raining and that got us worried.  Heavy clouds would block our view of Everest.

With clouds staying overnight, we decided to change plans and left for Pokhara instead, a seven-hour trip by land.

I decided to sit in front of the bus so I could take photos of this land and its people that I was seeing for the first time.

Buildings here, I noticed, rarely go beyond four floors.  But they extended vertically: When children got married, their family would add another floor so they could stay together.  Talk about extended families!

The Nepalese are keen on details and make sure that the ceilings, windows and practically the entire structure of their homes would showcase what their ancestors have built ages ago. No wonder many areas are considered world heritage sites.

Like most people in nearby India, many Nepalese are Buddhists or Hindus, and consider cows sacred.  The animals may loiter the streets or block the roads, but they are largely left alone.

Most people have marks on their foreheads, which signifies their being blessed, our tour guide tells us.   Babies too have marks on them, this time eyeliner, that the guide said helps them see better as their eyes are protected from the sun.

I had my doubts.  I think the babies are being made to look like Nepal’s living goddesses, who also wear eyeliner.  In Nepal, girls 4 to 6 years old may be chosen as living goddesses,  and remain so until she reaches puberty, after which she gets replaced.

Since the clouds were still covering the majestic mountains, we rescheduled our drive to Sarangkot at sunrise for a view of Dhaulagiri, Machhapuchhre, and Annapurna.

Instead we hied off to Lake Phewa and saw a lot of people fishing. Note that there aren’t many bodies of water in Nepal, and people rarely eat fish.  Most of them survive on farming as main livelihood. It’s quite normal to see corn being dried outside their homes, much like Filipino farmers do here with corn kernels for chicken feed.

Many Nepalese also do house chores outside, perhaps to maximize natural lighting and save on electricity. I saw people washing their clothes, cutting their nails and brushing their teeth just outside their homes.

Like Metro Manila, a lot of road construction projects in Nepal cause gridlock on city streets.  On our way back to Kathmandu, we were stuck for more than an hour on a main road by the mountainside. It was a two-way road but only one lane was open. Our guide said that road improvements were not the priority of the government.

Vendors took advantage of the traffic and hawked the wares they carried on their heads.  They must be hard-headed, literally.  Imagine carrying a refrigerator on your head!

Aside from good roads, it seems that road safety is low on the priority list of the Nepalese.  Unlike Metro Manila where passengers are required to wear seat belts, the Nepalese are more casual about life and limb.  We saw people sitting on top of their cars and moving inside even while the vehicle was moving.  Despite the roads being rocky, we saw too many passengers on motorcycles, with only the drivers wearing safety helmets.  That of course is true as well in Metro Manila, but to a limited extent.

When we got to the Garden of Dreams, we saw how apt the name was. It was a dreamland in Kathmandu, with mostly foreign visitors enjoying the place. Some were reading books, dozing off, running after chipmunks, and generally just chilling out.

What I found surprising—and sad—was how women were allowed to work in construction sites as well.  In fact, they did the heavy lifting.  I saw two men shoveling rocks into a basket being carried by a woman.  She would later carry the rock-filled basket on her head.  It was a heartbreaking sight.

Just as heartbreaking was the sight of children begging, usually with a bigger and older child prompting them or carrying them around.  One mother propped up her young child by the roadside to solicit alms, while she smoked a cigarette, oblivious to the many ways she was putting her child’s health and well-being at risk.

Poverty makes people do things they otherwise would think twice before doing.  But in Nepal, we saw how nobility of spirit transcends wealth and status.  Some people can make the most of their lean lives, and even find the good in their dark circumstances.

As I riffled through my trove of photographs, I was particularly struck by the photo of a father and son playing with a toy car. The toy used to be an empty bottle.

Throughout the streets of Nepal, I found smiles amidst the squalor.  People took long walks but held hands and gave each other hugs along the way.  The sight was vastly comforting.

Giving me another high was my next adventure on this trip:  I, a strictly non-adventurous person, went paragliding.  Yep, I jumped off a mountain and flew up into the clouds. It was so peaceful that it felt like heaven as I soared above and saw a magnificent view of fields and plains in varying shades of green.

On our last day in Nepal, we took a plane to get our view of Mt. Everest. Then we squeezed in an unplanned trip to Bhaktapur Durbar Square where we walked around and loitered.  Then I saw it—a watercolor painting of a girl who looked like me.  It wasn’t me, but I was awed at how uncannily we resembled each other.  I did not expect this and immediately felt humbled and overwhelmed. It was like God took me a step back to witness what, even on this foreign land, was familiar and comforting.

I started to see what I had missed before—or dismissed as eyesores. The dust from the dug-up streets reflected the sun’s rays better.  The tangle of cables and electric wires dangling overhead provided this heavy monkey a high seat from where it proceeded to entertain us.

At the Kathmandu Durbar Square, a monk holding out his begging bowl allowed himself a genuine smile and became more human in our eyes.  He was no longer just a tourist attraction or a photo subject, but a real person with a happy heart.  We had connected.  As one of the guys in the tour said, we have to get to know the people and interact with them, because this is something we cannot get from travel books.  The human connection makes the trip a more memorable and unique experience.

It also made me more hopeful that one day, these people would make Nepal a better place not just to visit—but to live in.   Coming here because of Mt. Everest is a good start, but the people help you take it further.