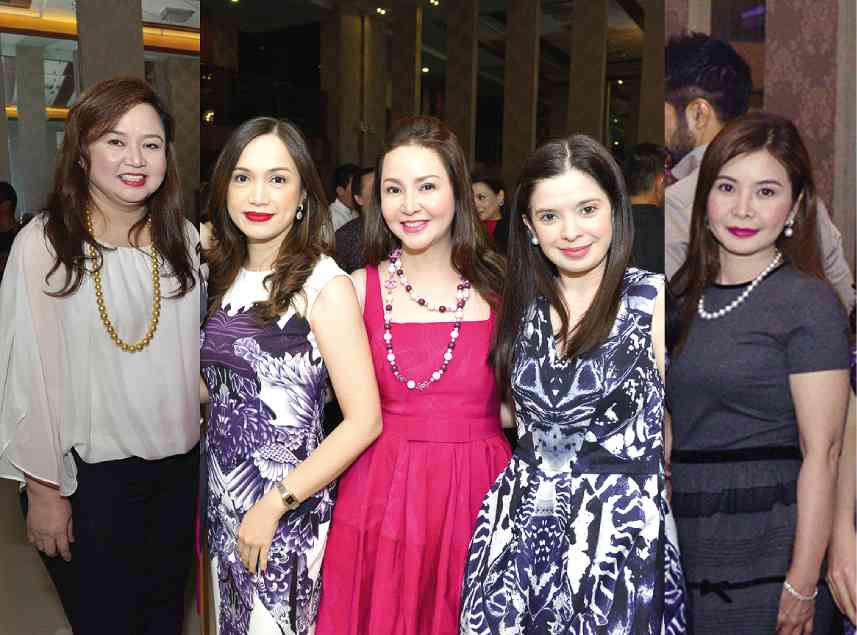 Some of our town’s most prominent celebrities passed all their other invites so they could make it to the recent birthday bash of their dear friend, low-profile construction magnate Alice Eduardo.

It took only four days for the party to be organized by Alice’s adorable sisters, Small Laude and Melba Solidum, with close pal Nicole Ortega. Held at the Patriarch Building on Chino Roces Avenue in Makati City, the event started with cocktails, followed by an excellent buffet dinner catered by Cibo’s Gaita Fores.

Two bands, Mulatto and Sauce, performed live. Many of the guests remarked that one of the reasons the party went so well was that the band’s music was toned down during dinner. It was after eating that people started dancing, shedding off their calories, till after midnight, dahlings.

Alice herself didn’t expect the party, having been told that there would just be a quiet family dinner. She had entered the venue wearing an eye-catching Escada outfit when her friends started singing, “Happy birthday to you!”

It was a touching sight as Alice’s parents and children watched the celebrant welcome her well-wishers.

To introduce its various brands of olive oil to the local market, O&Co. hosted cocktails and a gastronomic feast for guests.

I was totally flabbergasted, palangga, on the varieties of olive oil that one can buy at the store, which is one of 80 outlets worldwide.

The launch, hosted by Bianca Valerio, was attended by très charmant O&Co. CEO Albert Baussan. He said, “We continue to share our passion in producing the best olive oil products from the Mediterranean gardens. The French company gives its highest commitment to quality, and prioritizes great taste and love for the craft for nearly two decades.”

French Ambassador to the Philippines Gilles Garachon led the toast.

Guests were toured around the store to taste O&Co.’s olive oil variants served in teaspoons.

My favorites were Mint Apple Melo, Basil and Oregano Melo, Mandarin and Pomegranate Melo and the Green Lemon and Mango Melo, dahlings.

The spotlight was on newly elected Rotary Club of Manila president Frank Evaristo and other officers and directors who were sworn into office by Manila Mayor Joseph Estrada at the Centennial Hall of Manila Hotel.

The club’s past presidents convened for the symbolic lighting of its 95th anniversary candle, which, Frank said, symbolizes the “aim to continue to uphold the honor as the first Rotary Club in Asia and as an exemplar of ‘service above self.”’

It was said that Frank’s modesty, leadership and dedication had earned him the club’s support.

The club’s music committee serenaded him with songs, including one that was paraphrased as “Stand by Frank.”

It was a great day for Frank, the new main man of the Rotary Club of Manila. Cheers, palangga!