Food that’s both Zen and hip, like being in an Asian gangster movie | Lifestyle.INQ ❮ ❯ 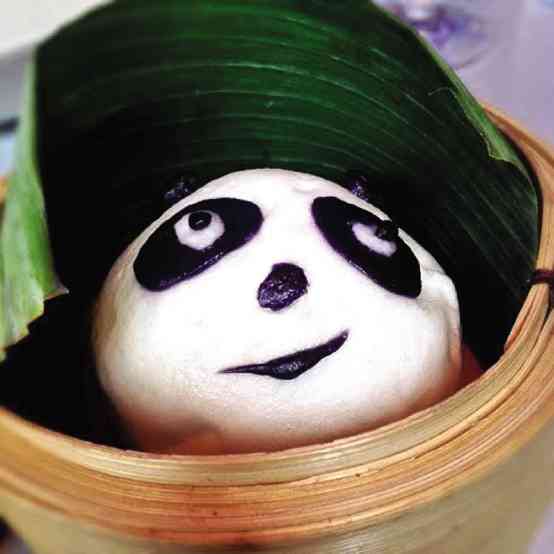 Food that’s both Zen and hip, like being in an Asian gangster movie

“The lights by the corner (on Makati Avenue) are pink and our food is Asian, hence the panda,” explained the waitress when I asked why the restaurant is called Pink Panda. Actually, the lights are red, hence the term “red light district.”

But Pink Panda is really like a Southeast Asian noodle house, its interiors reminding you of Singapore, Japan, Thailand and Vietnam all at once.

A bicycle hangs on a wall. An aquarium rests by the entrance. Chopsticks are conveniently placed on every table. And the private section that seats about eight offers a Zen but hip vibe.

The menu has witty names. Pork belly roasted all day is called “Love You Long Time”; meatballs are called “Braised Balls of Fire”; a salad is served with “Daughter in Law Eggs”; and the item for pad thai is “It’s a Fad Thai.”

Trying hard to be cool

But some menu items are trying hard to be cool. The Tom Yum soup, whose flavors are on point, are served like shots, appropriately called Tom Yum Shots, in shot glasses.

You have no choice but to make your fingers endure the heat and hold that glass in the spirit of cool.

Another soup, the Xiao Long Boom, is supposed to connote a giant xiao long bao. I get the idea: The broth in the xiao long bao is so good you can have an entire bowl of it.

But you’re supposed to pop the entire dumpling into your mouth and feel it burst, relishing the excellent broth.

Here, the dumpling skin has no real function except to be cute. In fact it was served sunken on my first visit, failing even to produce the imagery it was supposed to have.

Other dishes make some sense, but may be too far out. The laksa is served with flattened buchi that you are supposed to appreciate by dipping in the laksa sauce.

But the buchi’s filling is too sweet you don’t need to pair it with the laksa—“I can stand alone,” it seems to be saying.

Try the laksa with the shrimp cakes with sesame seeds instead, originally served with tom yum. This one absorbs the soup and adds a slightly sweet contrast to the spice. It is delightful.

There are certain fusion recipes though that are not confusing and actually enjoyable. The prawn with salted duck egg is highly addictive, something the owners are said to have maintained from one of their former restaurants, Crustacea.

The beef rendang hits all the spicy notes, but ask the kitchen to make sure the beef is very tender. Same goes for the laksa, but it would be wise to ask for an extra bowl of soup as the original bowl offers less and thicker soup, almost like a sauce, probably to accommodate the indifferent buchi.

The appetizers, meanwhile, are immensely satisfying. The Vietnamese spring rolls and the “Dimsum and then Some” are served in generous portions, perfect for sharing on a night-out with friends.

And the Panda Buns are the cutest versions of siopao ever, Jack Black’s heart would melt.

Interestingly enough, even if this restaurant is in the red light district, just off Makati Avenue, the crowd is not sleazy at all. While the United Colors of Papas walk around outside, exotics in tow, inside are legitimate couples and groups of friends.

The Panda isn’t red, after all, but truly just a happy pink.