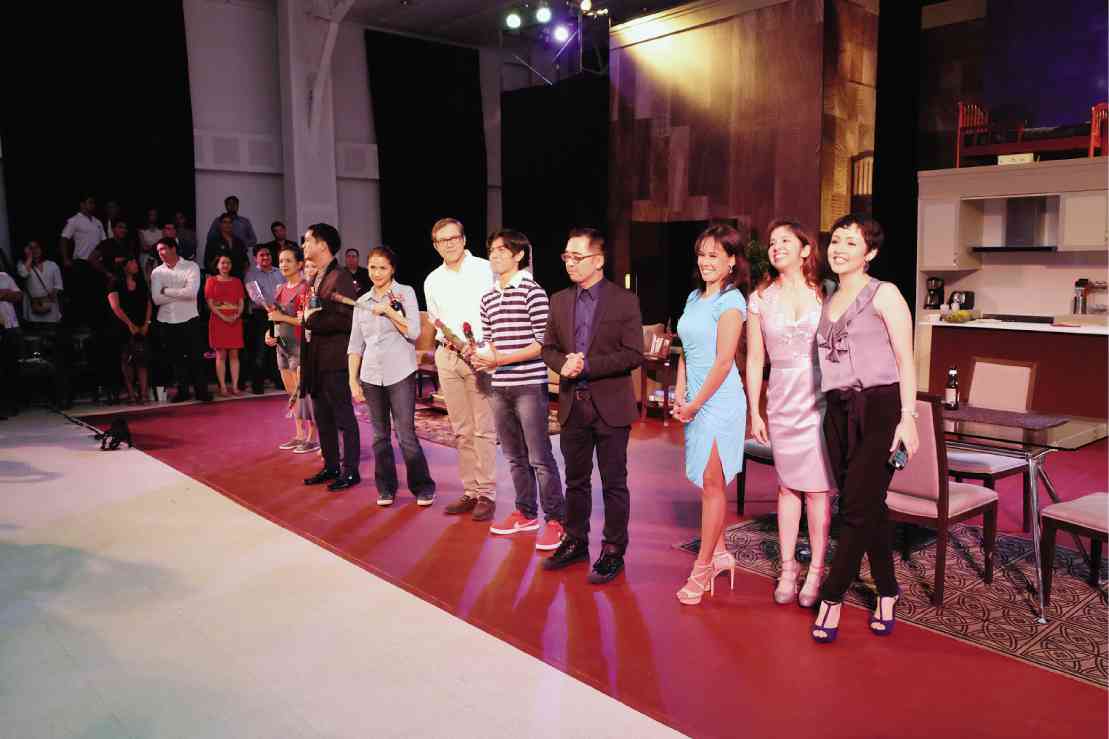 The Philippine theater scene has been refreshed with the Red Turnip Theater company that is celebrating its first anniversary.

The band of five actors that make up Red Turnip, namely, Ana Abad Santos, Topper Fabregas, Jenny Jamora, Cris Villonco and Rem Zamora is back with its second season.

The event gathered the A-listers of Philippine theater.

Written by David Lindsay-Abaire, “Rabbit Hole” is a Broadway hit that garnered several Tony nominations and a win.

The guests were given a treat at Red Turnip’s unusual venue, White Space (2314 Chino Roces Ave. Extension, Makati) where cocktails were served before the show.

Ralph’s Wines and Spirits provided flowing wines and vodka with the hosts encouraging the audience to enjoy their drinks inside the theater.

As brand ambassador of Fila, I made sure to promote all the shows that run until the end of August.

Inside the theater, the audience was encouraged to do #selfie photos on the set care of Mandaue foam and Smeg appliances. A Smeg classic-look refrigerator was displayed in the kitchen set of the production.

The Manila premiere of “Rabbit Hole” has film and television star Agot Isidro playing the role of Becca, with theater veteran Michael Williams as her husband Howie. This production marks Agot’s return to theater after seven years.

In another arts and culture arena, the local music scene is just as vibrant.

Music spans generations. The musical talents of some legendary artists have been passed on to their children, who are now members of a new exciting rock band, Generation.

Ige then introduced the Chan brothers to his friend, Kowboy Santos, lead guitarist and son of Sampaguita.

Generation was formed in 2008 and started out by playing gigs in various clubs around the city, covering The Beatles, The Rolling Stones and The Cars.

A shared passion eventually led the members to write their own material and incorporate the songs into their live sets.

In 2010, the band began recording its album of all-original songs, with all four members taking turns on lead vocals.

At the launch of its self-titled debut album released by Star Records, Generation drew a crowd of family and friends at Hard Rock Café Makati.

After the formal introductions, José Mari Chan joined his two sons and Celeste Legaspi joined her own son on stage.

“Generation” promises to be one of the most engaging album releases in a while.

It is available at record bars nationwide and online stores worldwide such as iTunes, Amazon, MyMusicStore.ph and Star
music.ph.

Tales of the grape

Music and the arts are best enjoyed with excellent wine. At a recent wine affair, I was introduced to Nederburg—South Africa’s most-awarded winery which was founded in 1791.

Nederburg’s hallmark combination of fruit and finesse continues to be rewarded around the world. The winery was chosen as Winery of the Year in the Platter South African Wine Guide, with an unprecedented five of its wines across the multitier range earning five-star ratings in the 2011 edition.

At a recently held wine dinner, guests were wowed by the stellar Nederburg Winemaster’s Reserve Sauvignon Blanc and Reserve Pinotage especially flown in for the dinner at Chef Jessie, Rockwell Club.

The chef’s breads and dips were paired with Nederburg Anchorman Heritage Heroes Range Chenin Blanc, while the Cabernet Sauvignon was excellent with the steak.

To complete the meal, Nederburg Noble Late Harvest was served with bread pudding in butterscotch sauce.

The wine’s subtle hint of spices and exotic fruit notes offered a perfect pairing with the fine cuisine of Rockwell Club making it a truly unforgettable dining experience.

Seen enjoying the food and wine pairing were Future Trade International managing director Noel Sebastian and ABS-CBN’s Ernie Lopez as they listened to Nederburg’s Wilhelm Pienaar share his excitement about the wines.

With excellent choices of weekend activities and new restaurants to wine and dine, living in Manila has never been so exciting.