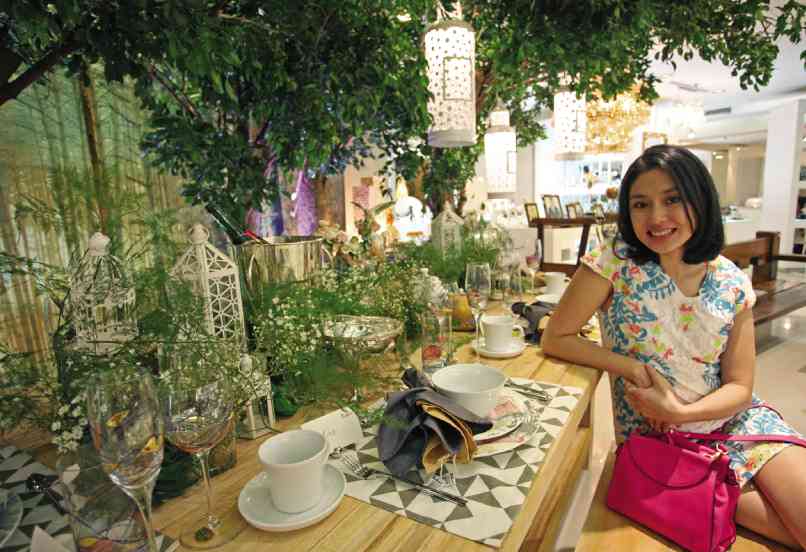 But while glamorous, the setting also bore a wink of whimsy, in the form of six chairs around the dining table: all clear acrylic, with variations of black-and-white accents, one houndstooth, another stripes, the image of peacock head on a backrest, and another, that of a dog in a suit.

The chairs are Acrila, a French brand, one of the new additions to the just refurbished Rustan’s Home in Makati City. The table setting is by recent bride Cathy Chia, one of the personalities tapped by Rustan’s to create home vignettes to inspire shoppers during its ongoing Rustan’s Home and Entertaining Fair (until Sept. 15).

Rustan’s’ Home section just had a facelift with the help of furniture designer Ito Kish.

Last week’s launch was timed to highlight the new global brands in the store’s growing roster, in vignettes designed by personalities.

Rustan’s marketing communications head Dina Tantoco created a champagne brunch setting for her family, a setup reminiscent of the Tantocos’ farm, Sta. Elena, in Canlubang. She opted to use a long wooden bench and mismatched stools in the homey and rustic affair.

“I like mixing and matching. I also like feminine, eclectic pieces,” she said. She used Lenox plates, Capodimonte porcelain and Dwell placemats.

“It’s personalized,” said Anna Marie del Rosario, one of the store managers. “We don’t push and push just to sell. The Rustan’s way is that we push because this is what the customer needs and it’s unique to Rustan’s and they can’t find it elsewhere. At the end of the day they’re happy because everything goes together.”

Heritage brands like Lladro and Lalique are customers’ favorites, Del Rosario said, followed by other famous brands like Bernardaud, Meissen and Lenox.

Rustan’s typically gets an older shopper demographic for the Home, but activities like the Home Fair are meant to showcase that “even traditional brands have new, modern styles” to suit the younger market, Dina Tantoco said.

Take, for instance, the 150-year-old French brand Bernardaud, which has a collection of dinnerware with artworks by surrealist filmmaker David Lynch.

Indeed, in the hands of homeowners with varied tastes, pieces from the same brands resulted in different impressions at the ongoing showcase.

Sevrine Miailhe, marketing communications manager of Rustan’s cosmetics, toiletries and perfumery division, created a chic breakfast nook using Meissen porcelain, a German brand favored by European royals, primarily because she felt an emotional connection: her mother is German, who gifted her with Meissen for her wedding. Miailhe chose a contemporary Acrila coffee table as counterpoint to the more traditional dinnerware.

Stephanie Zubiri-Crespi, a chef, had an eclectic mix of Bernardaud plates and Cristal de Paris glassware on repurposed glass-topped display case table from the Dutch brand Pols Potten. It reflected her own home, where things don’t match because she usually buys on impulse. The nook she created had an antique Oriental china cabinet, and a mix of chairs—tufted, an ottoman and a couple of white woven ones, all against a Prussian blue wall.

Philippine Tatler’s Mia Borromeo designed her corner the way she would accessorize herself: chic with some playfulness. She chose mostly bird-theme Bernardaud plates for her tropical table, and a vibrant floral arrangement as centerpiece.

During the Rustan’s Home and Entertaining Fair, a minimum purchase will entitle shoppers to raffle ticket, with five winners of airfare and two-night hotel stay at Grand Hyatt properties in five Asian destinations.

There will also be workshops to demo trendy kitchen gadgets like vegetable and fruit juicers.