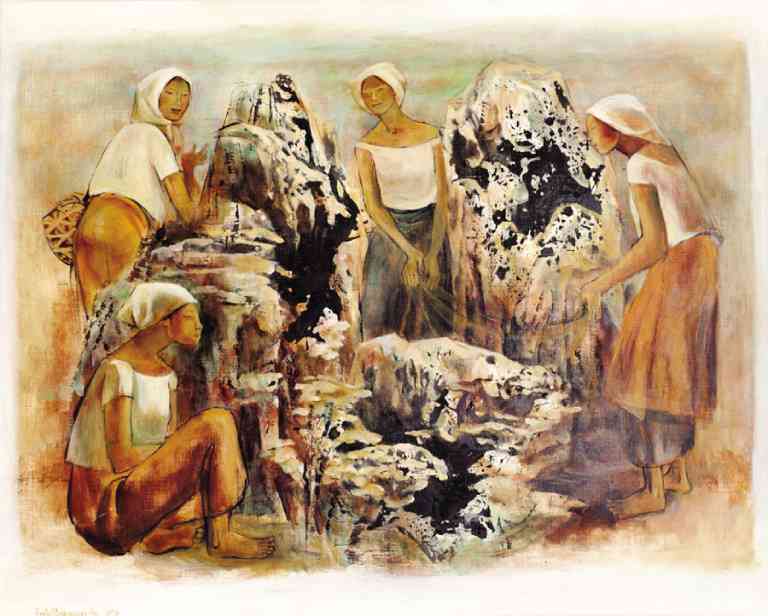 “UNTITLED” (women by the seashore), by Anita Magsaysay-Ho

A young photographer reportedly genuflected before a first-edition copy of José Rizal’s “Noli Me Tangere” when a gloved Richie Lerma, advisor of Salcedo Auctions, gingerly pulled it out of a sepia-colored box.

The team of photographers hired to take pictures of art and other precious objects to be auctioned was about to wrap up after a full day’s shoot when Lerma took the box from the office vault.

“The photographers had no idea what they were about to shoot. There was a collective gasp as I opened the box and unwrapped the Japanese paper that covered the book,” Lerma recalled.

Lerma anticipates the “Noli” to be one of the main draws when the house holds its biggest auction yet, a two-day event that happens on Sept. 20-21 at the Rockwell Tent.

Lerma immediately did his research when a descendant of Rizal’s elder sister, Narcisa Rizal-Lopez, decided to sell the book.

“The last time a first-edition ‘Noli’ was offered was 10 years ago.  A group of numismatists or book collectors had a small sale among members [that reportedly included] a ‘Noli.’  But there is no record of what happened, what were the results,” Lerma told Inquirer Lifestyle.

Rizal, during his stay in Germany, had limited funds and only managed to publish 2,000 copies of the controversial book that earned him the ire of Spanish colonizers.

Many of those copies that reached Philippine shores were destroyed immediately at their behest.

The religious of that time, in particular, insisted that it was a mortal sin to possess the “Noli.”

“All of this adds to the rarity of this piece.  When you possess such an important piece, you would want it to go to someone who would take care of it,” Lerma noted.

A veteran of over 30 public auctions, Salcedo Auctions decided to offer four auctions (Important Philippine Art; Connoisseur Collection; Fine Jewelry and Timepieces; and Rare Automobiles) to elevate the local auction experience and put the country at par with similar events in neighbors Singapore and Hong Kong.

“While we started with art auctions, auctions go beyond the visual arts,” Lerma said. “Full auction houses overseas offer different categories of collectibles.  We also perceive that there is a need for people to have an outlet as well for their other valuable collectibles.  What are their alternatives aside from person-to-person [transactions]? I think that is the niche Salcedo [is trying to] fill.” Lerma explained.

The jewelry will include Art Deco and 18k-gold pieces as well as diamonds from Cartier, Bulgari, Tiffany and Company, Robert Coin and Chaumet.  Timepieces offered are from Audemars Piguet, Breguet, Patek Philippe, Rolex and Vacheron Constantin.

Lerma said those who would want to examine the catamaran boat would be ferried by a coaster from Makati to Subic where the vehicle is docked.

A preview of the precious objects runs Sept. 6-19 at the Proscenium Lounge’s Kirov model unit at Power Plant Mall in Rockwell.

The Well-Appointed Life: An Auction Weekend is co-presented by Philippine Tatler, with Rockwell and Jaguar as major partners.