A place for dogs to dine–and their humans can come, too | Inquirer Lifestyle ❮ ❯ 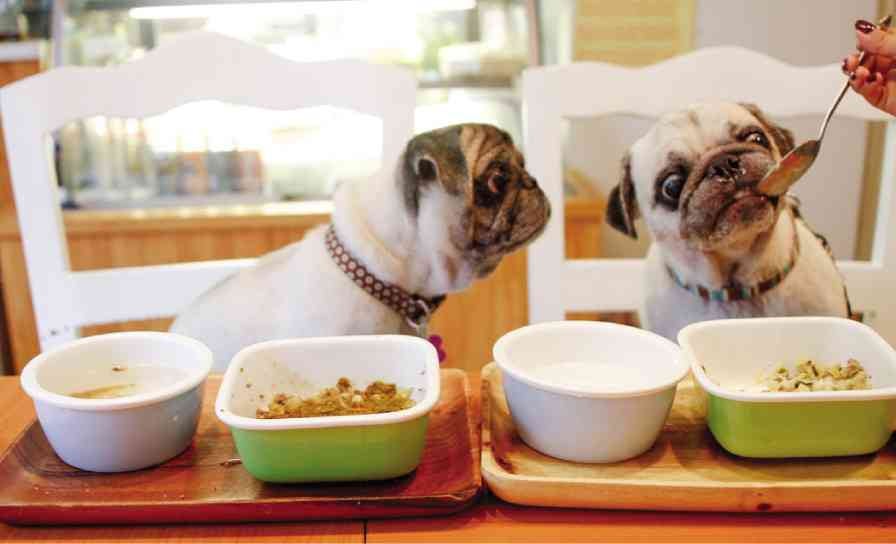 A place for dogs to dine–and their humans can come, too

Of the eight, she said, her dad’s were the hardest to please. Apparently the shih tzus have acquired the discriminating palate of its master.

If the shih tzus do not like it, then it’s back to the drawing board for Giannina.

It was an experiment, backed by her solid background in food nutrition research and development, that took several months to perfect. In 2010, Giannina found herself buying dog treats by the bulk, dried and canned— not for her dogs, but for herself.

“I just had to know why these food and treats were driving my dogs crazy,” she said. Taste-wise they were okay, but it was gross, she admitted, especially since some of the brands have ambiguous ingredients, such as byproducts.

Byproducts are made up of what’s left of chickens, pigs, goats, sheep, birds or fish, or a combination of these, after their edible parts have been removed.

A culinarian and freelance food stylist by profession, Giannina devoted herself to research on pet nutrition, whipped up over a hundred recipes for her dogs to taste, before pruning the list to about a couple of dozen.

The online shop opened in 2011, and the dog café was launched March this year.

From birthday cakes to pupcakes, biscuits to muffins, biscotti to chews, pawstas to savories to even a nutritious doggie yogurt cooler, Giannina has your doggie’s nutritional needs covered—and they taste good, too, judging by how plates are licked clean by its four-legged guests.

All pet food is made from fresh ingredients, even organic where it’s available, and prepared with meticulous attention to quality by its chef. Its premium doggie biscotti, for instance, are twice baked the Italian way for that extra crunch dogs love so much. Its muffins have human-grade proteins and are made with organic virgin coconut oil, and the chews are slow-roasted.

“Whatever we buy, we buy in groceries for people. If you place a plateful of dog food versus real beef in front of a dog, the guesswork isn’t really that hard. The dog will, for sure, go for the beef. They know it’s fresher and more complete,” Giannina said.

There are two sets of menus at the Whole Pet Kitchen Pet Deli and Bark-ery, one for pets and the other for humans. The pet menu is salt-, sugar- and preservatives-free. Man’s best friend, in fact, will be eating a far healthier meal than his/her human companion.

The café offers fancy service to pets never before seen in the country. Pet food is served on a tray with two ceramic bowls: one for the main course, and another for the drink (or water). Pets also have separate sets of cutlery from the humans.

But the price range are reasonable. The lasagna, for example, is P88, while the risotto is P78.

When Inquirer Lifestyle visited for an interview, we brought with us two senior pugs, Missy Elliot and Lord Trojan Spike. Now, pugs may not be the pickiest of eaters—they have a predilection for anything edible—but they sure know how to show appreciation, and flattery, to the chef.

Missy devoured her lasagna in less than a minute, never stopping to even breathe, while Spike ravaged his risotto with gusto.

“The pugs really love the food!” Giannina exclaimed. Yes, they did, and so did practically every dog that was in the café that day.

The biscuit treats smelled clean and fresh, and tasted quite nice. Imagine eating biscuits without sugar, salt and other preservatives. Sure they were a tad bland for treats that smelled so yummy, but the dogs loved it.

Wholesome Pet Kitchen has a resident dog, a four-year-old golden retriever named Jack. Well-behaved and friendly, Jack also acts as the dogs’ mediator. He has a calm presence that most dogs reciprocate upon meeting him.

On a busy day, the dog café can be a cozy, snug fit. One time, recalled Giannina, six golden retrievers dined in at the same time. With Jack around, that added to a total of seven large dogs moving around in a small café that can sit only between 10-12.

Things can get pretty tight in the café that humans oftentimes begin chatting up dog owners at the next table. It’s inevitable, Giannina said, since their dogs have already started introducing each other by sniffing out other dog’s rears. This breaks the ice, and soon enough guests and their dogs will have settled down.

‘Extension of their homes’

“You don’t act a certain way but yourself around your dog, so people get to be themselves here. It’s like an extension of their homes. You definitely won’t be at your best behavior,” she said, laughing.

The staff of two is also on-hand in case of “accidents.” The smell of food and other strange dogs inside the café can be overwhelming for some furry creatures.

Giannina said there’s only one rule in the café: Dog owners are fully responsible for the pets. If a dog bites another dog, or a human guest, for instance, the owners are liable for the damages caused.

Cats are welcome, but they rarely come visiting. Most days, she said, the owners just swing by to pick up orders.