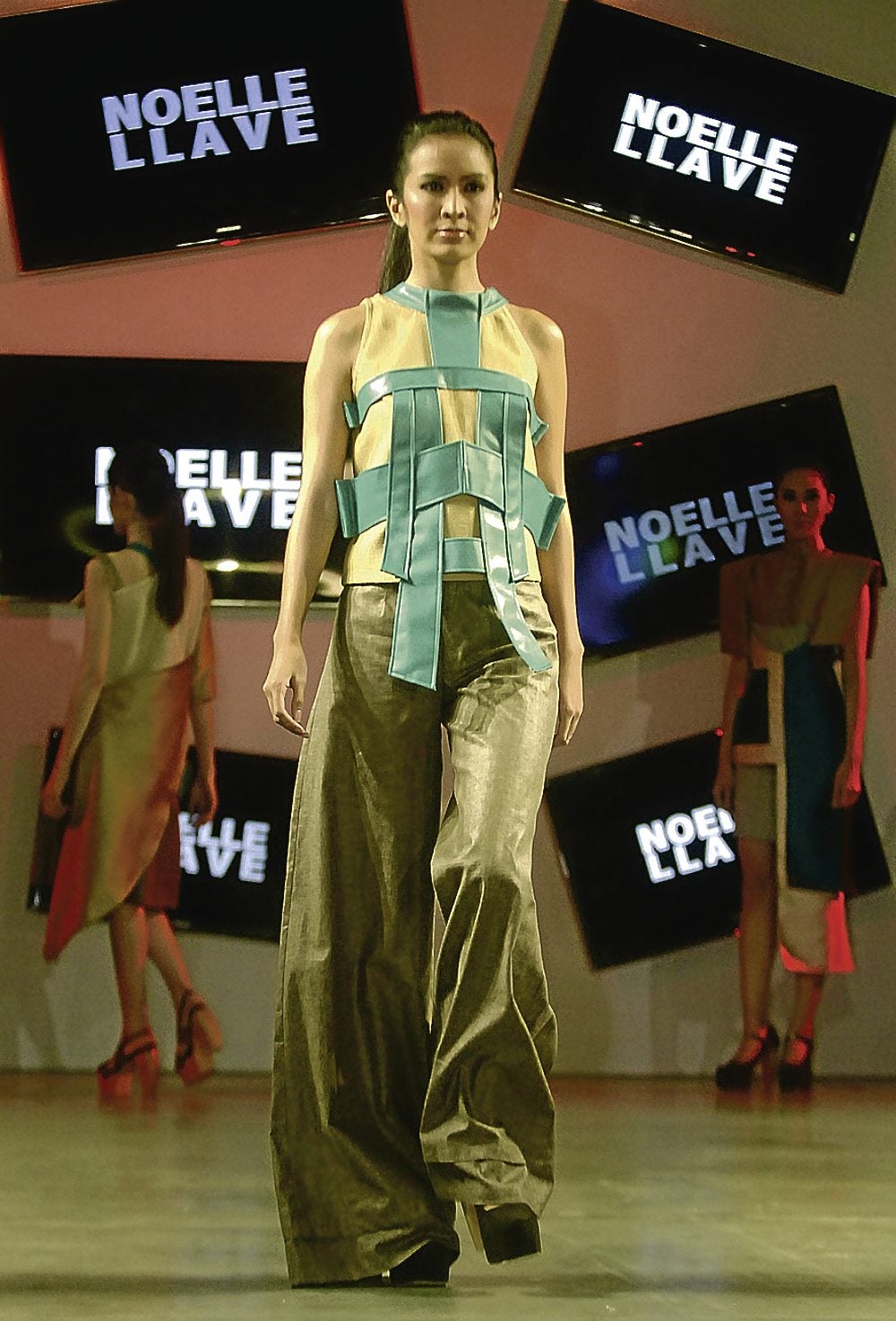 Geof Gonzales quit making clothes for a year, discouraged that there was no viable market for his sculptural designs. Conceptual—or “cerebral,” as some describe it—designs are appreciated here, lamented the young man, but no one is buying.

But things may soon turn around for Gonzales, 24, who won on Tuesday the grand prize in the Look of Style Awards 2011 fashion design competition held by Look Magazine and Inquirer Lifestyle at Rockwell Tent. The glossy, which is marking its third year, is awarding Gonzales, under the auspices of the British Council, a short study and mentorship grant at the prestigious Central Saint Martins College of Arts and Design in London. He will also get to take two courses of his choice at the Asian Institute of Fashion.

The Look of Style Awards is now on its second year of collaboration with the British Council, under the sponsorship of Samsung.

A fine arts graduate of the University of the Philippines, Gonzales bested nine other finalists from Metro Manila, Cebu and Cagayan de Oro. His interpretation of the theme “Stylish Tech” is a nod to the human form, referencing marble sculptures of the Renaissance and the Ifugao rice god figure, bulol. He mixed cubist and angular aesthetics with the opulent and came up with sculptural shapes that are akin to a hunchback.

Gonzales has no formal training in fashion design. He has worked for Team Manila, Mental and the defunct I Love You store. The last year, he has been working as stylist. His motivation to compete was the desire to study in Central Saint Martins.

“I just really want to win, go to school there,” he said backstage at the Rockwell Tent before the winner was announced.

“All are very talented in their own respect,” Higgins said at the final judging. “Some have beautiful clothes that are wearable. Some have very edgy clothes that aren’t necessarily salable but you see that there’s a design genius behind. What does it for me is raw talent. I’m not so concerned about wearability and salability, but I guess that’s the background I come from.”

A former fashion designer himself and son of the eminent couturier Salvacion Lim Higgins, he now runs the school she established, which has produced the likes of Joe Salazar, Cesar Gaupo, Joey Samson, Michael Cinco.

“There’s a lot of raw talent here,” he said of the finalists. “Some are works in progress, some need a bit more training in pattern-making, some need maturity in design.” A stint in the London school would nurture the winner’s design sensibilities, he added.

“It’s very important to research, because it guides you to a different inspiration,” said Tan-Gan. “It allows you to see what has been done. You should research on your material. In the entries, the more interesting ones were those who tried to develop their material also.”

While Gonzales’ collection didn’t seem like the obvious choice, “the panel favored Geof’s work because he presented something different,” Cuevas explained. “The way he conceptualized and executed it was very intelligent. It wasn’t boned or wired. I think it’s in his choice of fabric. We noted that some had good designs, but they chose the wrong fabric. Others had good fabrication but lacked in the design element. The point was to make the design unique and wearable as well.”

She also noted that one finalist’s collection was “really polished, but it somehow resembled last year’s winner’s collection. That can’t be the template of all the winning collections. This time we wanted to choose someone whose collection stood out, and one that would also fit in the school he will attend, who will benefit most from that.” In other words, a raw talent that can be molded into shape.

Cuevas expanded this year’s tilt by holding a cattle call for designers in Cebu and CDO as well as in Manila. It drew a mix, from upstarts to some who’ve been in the business for sometime. As in the previous year, finalists were required to present pieces from their previous collections as well as their interpretations of the contest theme.

Many in the audience agreed that this year produced interesting yields—the contestants produced a good variety of work, from concept to fabrics, silhouettes to craftmanship. It was interesting how many of this year’s design contestants loved to work on the fabrics, with their hands—from weaving to shredding (one shredded chiffon and turned it into fabric).

“We’re looking for someone who’s in it for the long-haul, not a flash in the pan,” Cuevas said at the judging. Unlike in some tilts where contestants “make two to three pieces and that’s

it, they win based on that, we required that they had to have been designing at least six months. We had to ask pieces from old collections to see the body of work, to gauge the consistency of their work, to see their ethics and vision. You see the potential and drive when you interview them.”

Veteran fashion designer and entrepreneur Tan-Gan, who was also a judge in last year’s tilt, said it’s imperative that fashion design competitions are clear about their objective and criteria, given that there are many contests being held at the same  time.

“You can open the competition to anyone, but what are you looking for? You might want those who are naturally creative without formal training. Your criteria can also be about those who had gone to fashion school. That would create more niche competition. Otherwise, all the contests will be the same and become generic.”

“What makes the Look contest different is its link to the UK,” San Juan explained. “It’s not about whose clothes will sell today or tomorrow. They’ve seen all sorts of talents at Central Saint Martins. We need someone who can benefit most from exposure to and from mentoring in that school. As Lulu said, isn’t it time we had the next Lesley Mobo?”

Such contests are encouraging and a good platform for exposure for young designers, Tan-Gan said. “It’s important for our small sector. It’s a growing industry. If we are able to nurture it correctly and guide it into a bigger industry…. The Philippines is very strong in creativity but needs formal discipline through education, by setting policies on the government level. Those are important in developing this sector.”

The British Council in Manila has been supportive of Filipino fashion designers in recent years, awarding study grants in the UK to young talents. Early this year, designer Pablo Cabahug, Look of Style Awards 2010 winner, attended a short course on fashion design and marketing at Saint Martins as part of his prize. 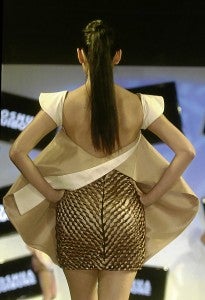 “Fashion is a special interest of Filipinos, and there’s a lot of potential for partnership with people in the UK,” said Burrell. “To get the engagement between providers of fashion education and creativity and mentoring, which can go beyond national boundaries, can bring the UK and the Philippines closer together.”

Cabahug, who presented a five-piece collection on Tuesday night, said winning last year opened doors for him. He now has his own studio in Makati, with a steady stream of clients for weddings and uniforms. At the recent Miss World pageant, 2010 Miss World Alexandra Mills of USA picked his dress to wear on her last walk. Next week, he will also present a collection for a hosiery brand.

“London was inspirational. I learned so much, especially about marketing,” Cabahug said. His collection consisted of crochet pieces that, he said, were inspired by his UK trip.

This year’s finalists from Cebu were Barbie Alvez, who incorporated fabric braiding techniques and reflectors in her collection; Pinky Magalona, who comes from a family of dressmakers, and shredded chiffon fabric to achieve a nappy, mohair-like texture to her material; and Andy Brian Esplanada, who started designing at age 16 and presented sleek dresses with graphic, motherboard matrix-like patterns.

From CDO, there was Joshua Guibone, an accounting graduate whose most distinct design element was the honeycomb pleating in his fabrication; John Mark Magallanes, a graduate

of La Salle College International, who presented a collection    with cutout details; and Shine Casiño, who combined Japanese shapes and local fabrication in his textured abaca collection.

From Manila, Gonzales was joined by Mark Tamayo, a graduate of School of Fashion and the Arts and an assistant to Randy Ortiz, who presented a visually pleasing collection of quilted materials; Noelle Llave, also a SoFA alumnus, showed weaving and pleating techniques; and Niño Angeles, who has an RTW line in Cinderella, and showed a sequined collection using indigenous materials.

Two of the finalists were given special awards. Alvez was awarded Samsung S2 Design of the Night for best interpretation of the contest theme. Samsung, a co-sponsor, presented her with a Samsung Galaxy S II.

Angeles was also given the Look special citation “for fusing indigenous materials in his work and making it look marketable as well,” according to Cuevas. He was awarded workshop courses at the Asian Institute of Fashion.

dvised the designers “to know and learn as much as you possibly can about your field, you craft, your fabrics, your execution, your aesthetics and all that, because you develop a much larger vocabulary to express yourself as a designer that way. To be a true designer is a never-ending process of learning.”

He added, “I’m a big advocate of knowing your craft, knowing it well and practicing and getting experience before you market yourself. Too many names out there have been marketed so much, but there’s not a lot of delivery so I’m a little anti that.”

There’s no definitive formula for success, Higgins said. Success itself, he added, is relative. “It all depends on what you want out of your career. Some just want to be famous and don’t care so much about the work… Some work for big brands and some become famous for high-fashion, one-off creations. Some also become famous because celebrities start wearing their clothes. It all depends on what you’re willing to do to realize those goals.”