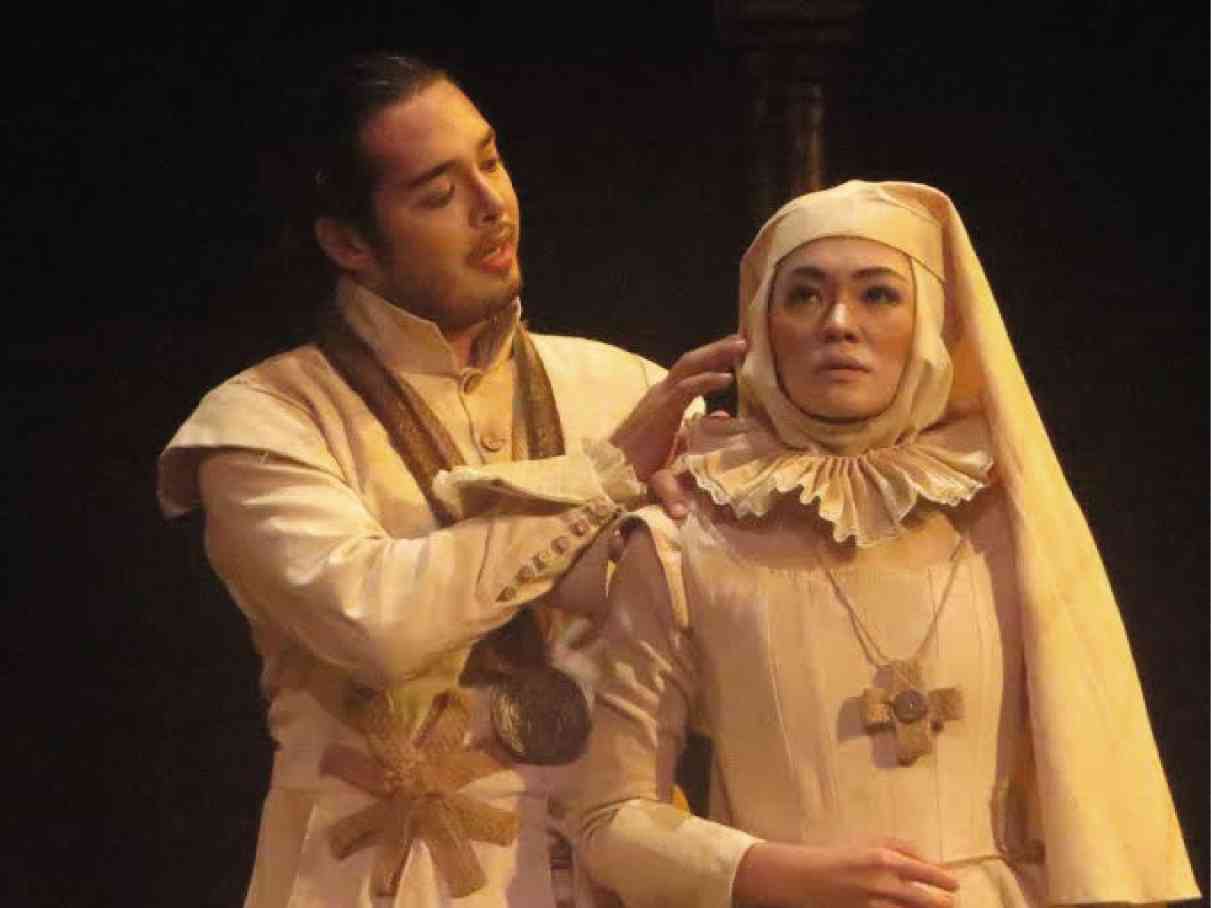 ‘Measure for Measure’: Conflicted feelings for a conflicted play

After their amazing performance of “Ang Nawalang Kapatid” earlier this year, Dulaang UP apparently went straight to the top when looking for a new play to mount: Shakespeare.

But instead of visiting old standbys like “Hamlet” or the ever-popular “Romeo and Juliet,” the campus-based theater company decided to try its hand at one of the Bard’s most complicated and problematic plays. The question is, does its production of “Measure for Measure,” directed by Alexander Cortez, measure up?

Reviewing a Shakespearean play is usually a breather assignment for a formalist critic, since one can generally rely on the Bard to have a deft grasp of storytelling and human nature. Not so for “Measure for Measure,” a political drama that veers between serious and comic, is heavily invested in a setting alien to most viewers, and, worst of all, leans heavily on a set of morals that seems perilously outdated to modern audiences.

The heroes are morally gray, the villains more pathetic than threatening. You just don’t get the same thrill from watching a pimp losing his head as you do from, say, the final duel between Macbeth and Macduff. The villain is no scheming Shylock, no visionary Cassius, but merely that most banal and mundane of all villains, a corrupt politician.

It’s a tough play to pull off. You have the gender dynamics comedy of “Twelfth Night” without the neat happy ending for the leading lady, the political intrigue of “Julius Caesar” without Brutus’ moral dilemma or Caesar’s supervillain charisma. Not for nothing is “Measure for Measure” considered one of Shakespeare’s “problem plays.”

But never let it be said that Dulaang UP didn’t give it its all. The production values are impressive. The costumes, all in pasty, powdery white, are successful at invoking the era while seamlessly conveying that something is rotten in the state of Vienna.

The sound design is flawless. That’s bigger praise than you think; most of the Dulaang UP plays I’ve seen had sound problems that detracted from the experience. Here, the music and sound effects are perfectly deployed, neither too intrusive nor too quiet. The set is big and broody, with an oppressive, cloying feel that effectively hems in the characters without hampering their blocking.

(I don’t much like the retractable chandeliers, though. A chandelier should be completely unobtrusive unless the Phantom of the Opera is dropping it on the audience.)

The hairpieces have to be seen to be believed. Mistress Overdone in particular looks like she could commit manslaughter by nodding her head the wrong way. Props to Issa Litton for acting with that monstrosity on her noggin.

Actually, the whole play was a test of endurance for the cast, given the immensely complicated language, the heavy costumes and the weak air-conditioning of the Guerrero Theater.

(“Measure for Measure” alternates with a Filipino version, “Hakbang sa Hakbang,” the translation courtesy of Ron Capinding, and with a different set of actors.)

The whole cast deserves kudos, especially Jeremy Domingo, who carries the play by sheer force of will. Earl Figuracion provides much of the play’s comedy as the buffoonish Lucio, Tarek El Tayech adds a commanding presence to the villainous Angelo, and Cindy Lopez suffers beautifully in the role of Isabella.

The casting is generally commendable, though I question the wisdom of putting the talented but inexperienced Isabel Quesada in the midst of all these giants. Usually you want a more even mix of neophytes and grandmasters, lest the latter overshadow the former.

The play’s biggest weakness, however, is its use of Shakespeare’s language. The ancient Greek critic Longinus once wrote that “The effect of elevated language upon an audience is not persuasion but transport.” It is very, very difficult to bring the power of Shakespeare’s English usage to an audience that lives by e-mail and text, one reason why so many adaptations of Shakespeare are placed in a modern context.

“Measure for Measure” chooses the harder path and pays the price. The play as a whole is a little too distant from contemporary audiences. The only way to bridge that gap would have been to make the language come alive, to sweep the audience off their feet.

There is a tendency for Shakespeare’s words to master the actors and not the other way around. That didn’t happen here, but neither was the audience swept away by the language—there was no “transport.”

That’s not entirely Dulaang UP’s fault. The plot is just too complex. Viewers will find themselves heavily dependent on the synopsis in the superbly produced program. I recommend going into the play with full knowledge of the plot, just so you can focus on the way the actors interpret it. There’s a brilliant but subtle feminist angle that stabs you in the chest right at the very end.

“Measure for Measure” is a complex, conflicted play that will leave you with complex, conflicted feelings. It is perhaps complex enough to defy neat categorization by a reviewer. If you’re up for a challenging performance, then I recommend you buy a ticket and take the measure of this play for yourself.