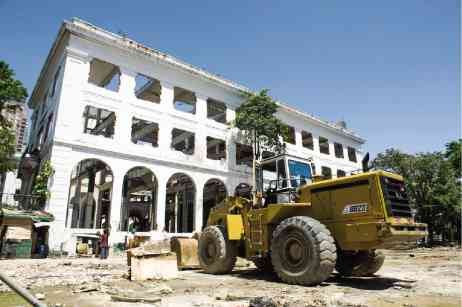 WHAT’S left of the historic Army-Navy Club in Manila after the developer dismantled it purportedly to make way for a “boutique hotel.” Below, at least the old historical marker has been spared. PHOTOS BY SHERWIN MARION VARDELEON 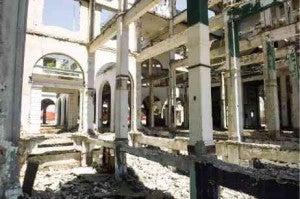 A flurry of multimillion development and infrastructure activities in Manila has put at risk many heritage landmarks.

Many of them declared cultural treasures or historical sites by the Philippine government itself, they seem to have been demolished with hardly any protest from culture agencies and despite the enactment of the National Heritage Act.

In most of the controversies, heritage sites are toppled with clearance from government agencies but without any contingency plan on conserving them.

It is as if,  as far as heritage landmarks are concerned, government and culture agencies were guided by this policy: Demolish now, conserve later.

On Sept. 8, the Department of Public Works and Highways (DPWH) announced it was demolishing the Anda Monument on Calle Aduana (renamed in another heritage-demolition job as Soriano Street) and Bonifacio Drive in Intramuros, Manila, purportedly to ease traffic around Manila north and south harbor. 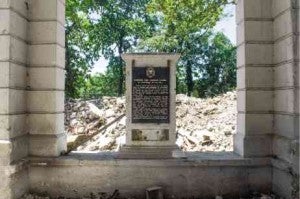 When the development raised a hue and cry from heritage advocates, DPWH announced the monument would not be demolished but merely transferred to another location.

It said it had clearance from the National Historical Commission of the Philippines (NHCP).

But it turned out the move was merely an afterthought.

Wilkie Delumen, NHCP Historic Preservation Division chief, said the agency received official communication from the DPWH on the Anda Circle only on Sept. 10.

A more telling instance is the Army-Navy Club near the Quirino Grandstand, whose interiors have been dismantled by a hotel developer.

After demolishing the annex and stripping the original building designed by William Parsons, which left it a ghost of its old self, authorities disclosed they had yet to see the redevelopment plan by the architect, Palafox and Associates.

Late last week, architect Felino Palafox told the press the ANC would be transformed into a “boutique hotel” and the developer hastily put up tarpaulins around the site to show the redevelopment plan.

NHCP recently issued a cease-and-desist order against the developer, Oceanville Hotel and Spa Corporation, because, according to Delumen, “they are not supposed to touch the main building without presenting the development plan for it.” 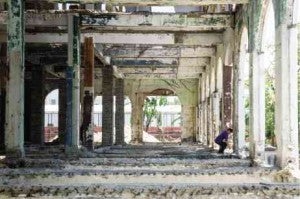 “It will be lifted only when they present development plan for our assessment and approval,” he said.

Jon Kasilag, principal engineer for AMH Philippines, Inc., clarified some details about its involvement in the project as earlier reported here last Sept. 8.

“Please be advised that we are not involved as contractors for the project, but are professional consultants rendering assessment and design services,” he said. “We were contracted with the intent of retaining and redeveloping existing structure for adaptive reuse.”

He said AMH was preparing detailed engineering studies for the structural rehabilitation of the building.

“There were already prior studies conducted which identified the most severely deteriorated sections of the Army-Navy Club, and the balance of the detailed designs for the retrofit works are the ones nearing completion (our services are being rendered in stages). AMH has no involvement in the actual construction work—hence we did not strip the original building as reported,” Kasilag said.

If in Manila, government agencies have a cavalier attitude or arbitrary approach to  heritage sites, how much more precarious would the situation be for heritage landmarks in the provinces?

Last month, the DPWH started chipping away at a 200-year-old Spanish colonial bridge built by Dominican missionaries and the Isinay cultural community in Dupax, Nueva Vizcaya, ostensibly as part of a road-widening project.

The project was halted after protests from the local community and heritage advocates.

Kinna Kwan, a cultural worker, lamented that in the Philippines development and modernization came first and the protection of heritage sites was severely neglected.

“They don’t understand that our heritage is part of real development,” she said.